Influencer Q&A with @Relativity: Why a movie studio uses Twitter to launch trailers

Every Friday the 13th, Twitter crackles with conversation about nightmares, black cats and creepy coincidences. When the notoriously unlucky day arrived last month, @Relativity, a global media company based in LA, gave users something new to talk about: an exclusive Promoted Video trailer for a horror film from Relativity Studios starring @katebosworth.

Users quickly watched, Retweeted and commented on the trailer, making “Before I Wake” not only the most talked about movie on Twitter, but an organic trend for the next three days.

Getting a movie trailer to go viral on Twitter isn’t witchcraft. According to the @Relativity team, it comes down to developing a compelling campaign, targeting it at the right audience and optimizing it in real time. To learn more, we chatted with three @Relativity executives: Carey Loomis, executive vice president of media; Liz Jones (@lizjones), executive vice president of digital marketing and Asli Taylor (@aslitaylor), executive director of digital marketing. 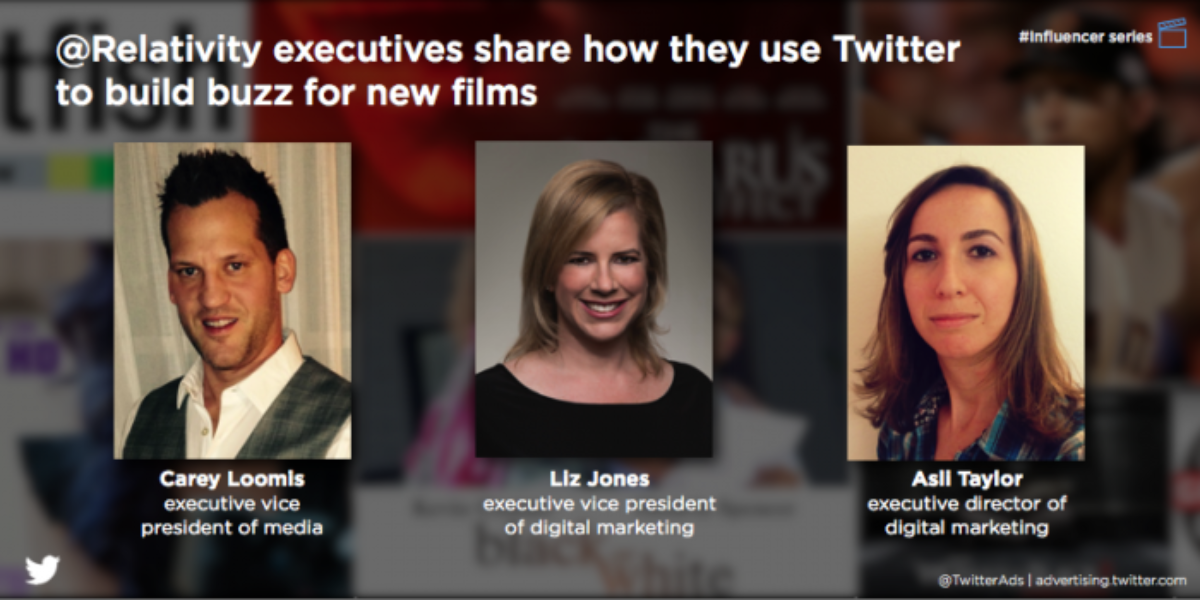 Image used with permission from @Relativity

@TwitterAds: You’ve launched a handful of movie trailers on Twitter over the last six months for films ranging from “Beyond the Lights” to “The Woman in Black 2: Angel of Death.” Why is Twitter your leading choice for distributing movie trailers?

Carey Loomis: The movie business is unique in that we have a very short window of time to generate awareness, create interest and drive heat to our film. What we’re able to do with Twitter is quickly drive conversations that build on one another so that each movie becomes more than just a small film; it becomes an event that you have to see.

@lizjones: If you want to capitalize on anything in the moment, you use Twitter. Twitter is the place where people go to talk and engage with content in real time, so we know they’ll be in the right mindset to view our trailers and share them with friends, giving us fantastic earned media. We found this to be especially true when we launched trailers for “Beyond the Lights” and “The Woman in Black 2” — people tagged their friends on Twitter and suggested they go together.

@TwitterAds: Tell us more about how you approached the “Before I Wake” trailer launch.

CL: We knew that on Twitter there would be a lot of conversation about Friday the 13th, and that a supernatural thriller film could really benefit from all of that chatter, so we decided to jump ahead of our in-theater trailer launch and release the trailer exclusively on Twitter.

@lizjones: Millennials and Hispanics over-index in going to supernatural horror type movies, so we decided to target those audiences on Twitter. We also used movie conversation targeting to ensure that there was no waste.

@aslitaylor: And as far as creative goes, we tested ten different Promoted Video thumbnail images with different copy to see what would work best. We liked that Promoted Video doesn’t auto-play — you have to click to watch. This matters a lot, because we know we’re getting users who are sincerely interested and really engaged.

@TwitterAds: Once you’d launched the trailer on Twitter, how did you ensure it gained traction?

@lizjones: We dedicated a war room of people to producing content and engaging users all day.

@aslitaylor: We’d made 30-40 pieces of content in advance, and used them to individually engage users we knew would likely be interested. We optimized in real time as we learned which content worked best. We found that when the content was compelling, we didn’t need to use the copy to tell people to share or favorite or talk back. They did it on their own.

@TwitterAds: What were the results?

@lizjones: This was the first time we released a trailer solely on Twitter, and we saw great success with it — not only on Twitter, but also on other platforms, even though we hadn’t spent on them. We generated close to a million Promoted Video views.

@aslitaylor: It surprised us how much we were able to dominate the conversation, given the competition. It was the first week of SXSW, there was a Q&A with “Insurgent,” there was a Q&A for “Outlander”…

CL: It’s a very competitive environment. At the end of the day, the crucial thing we have to do as marketers is make sure we have a very strong share of voice, and that’s why being the most talked about movie on Twitter matters.

@TwitterAds: “Before I Wake” comes out in theaters on May 8. What happens next?

@lizjones: A campaign will have natural ebbs and flows and spikes in conversation. Regardless, we are constantly seeding Twitter — with text, GIFs, videos. We want to hear what our fans have to say, and then we’ll adjust the campaign accordingly.

What we know from studies is that if you trend, and if you have people engaged on Twitter before your trailer is on television, they’re more likely to pay attention when your spots come on. Seeing our trailers on Twitter whets users’ palates, and helps them later convert into ticket buyers.

@TwitterAds: How has digital marketing for movies changed in recent years? Where do you see it going next?

What we learned from “Before I Wake” is, the more that we can find a cultural event that ties into our movie on Twitter, the more success we’re going to have. The key is that Twitter is about people’s personal views on the world, and what they’re interested in. Twitter gives you the ability to tap into those people in a way that they feel is relevant to them.