The first #ElClásico of the Spanish League (@LaLiga) season will take place this Saturday between Real Madrid (@RealMadrid) and FC Barcelona (@FCBarcelona), and as usual there will be more than three points at stake.

The squads of Luis Enrique (@LUISENRIQUE21) and Rafa Benitez (@rafabenitezweb) will not only measure their forces on the pitch, but also on Twitter where both teams have enormous followings. Adding up all the followers from their accounts in different languages, @RealMadrid (27.5M) and @FCBarcelona (31.2M), exceed the populations of many countries.

#ElClásico raises passions around the world and this Saturday fans have another chance on Twitter to show their unconditional support for their favorite team, watch replays, and join the convo before, during, and after one of the most anticipated games of the @LaLiga season.

The encouragement of the fans before the match is important for the clubs and their players. To ensure your support does not go unnoticed we have activated special emojis which will appear in your Tweet if you use the following hashtags: #ElClásico, #HalaMadrid, #RealMadrid, #FCB, or #MesqueunClub.

Before the match both clubs and @LaLiga are encouraging fans to join the #ElClásico conversation. @FCBarcelona and @LaLiga are publishing Vines and videos with historical moments of the Clásico plays and matches.

Also, @FCBarcelona fans who encourage the team by sending a Tweet mentioning @FCBarcelona and a player name will receive a personalized surprise.

@RealMadrid has looked back at some of the best goals scored by their players in previous meetings with Barca.

They are also are conducting polls to test their fans knowledge about past matches.

And these are the most followed FC Barcelona players

Your Tweets will be seen by even more fans
Tweets from the #ElClásico conversation on Twitter will be displayed on external big screens that Clear Channel has paced in Madrid, Barcelona and main shopping malls all around Spain. On those screens anyone can see Tweets sent by fans from all around the world as well as real-time data that will reveal which supporters are Tweeting more and the most mentioned players.

In addition, fans on the street in Madrid city will be able to follow a live Periscope broadcast on exclusive moments of @FCBarcelona in Madrid. 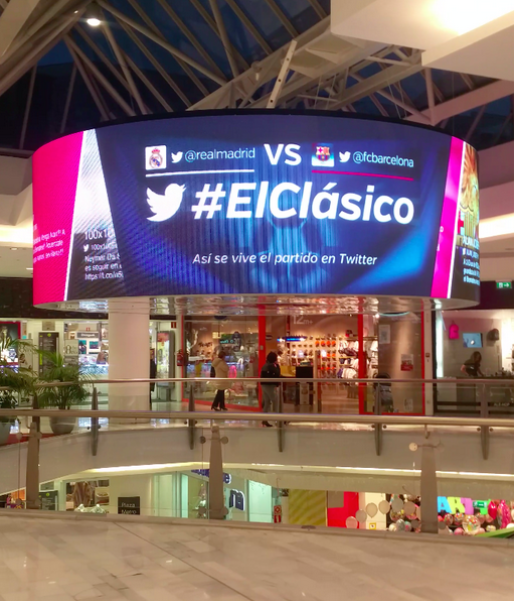 Get ready for the match and join the convo!