#MarchMadness 2015: The best ways for brands to Tweet the tournament

Starting this Sunday, millions of fans will gather on Twitter to cheer on their favorite @NCAA teams, celebrate buzzer beaters and mourn busted brackets. #MarchMadness (@marchmadness), which lasts until April 6, offers all kinds of brands plenty of opportunity to join the action and engage fans in real time.

To help you Tweet effectively throughout the tournament, we’re sharing our top stats about sports fans on Twitter plus three tips based on insights from last year’s advertisers. 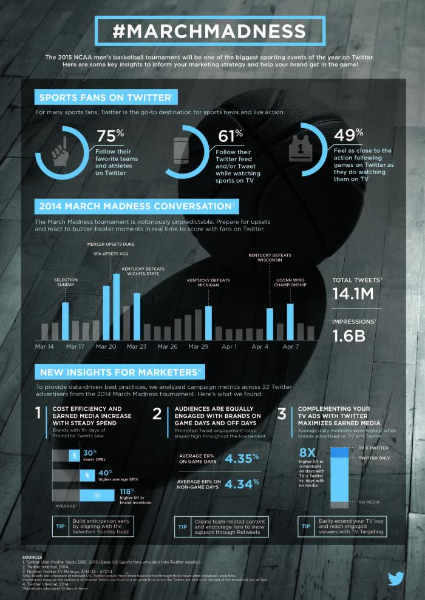 For many sports fans, Twitter is a top destination for sports news and live action. According to our research with DB5, 75% of sports fans on Twitter use the platform to follow their favorite teams and athletes, and 61% follow their Twitter feed and/or Tweet while watching sports on TV. Nearly half (49%) say they feel as close to the action following games on Twitter as they do watching them on TV.

March Madness fans are no exception. Last year, Nielsen Twitter TV Ratings found that in the US, TV broadcasts of the tournament generated 14.1M Tweets and 1.6B Tweet impressions.

Tips for the 2015 tournament

To provide advertisers with data-based tips for March Madness 2015, we analyzed metrics from nearly two dozen 2014 campaigns. Here are three recommendations based on what we found:

Last year, brands that ran Promoted Tweets for 11 days or more enjoyed a 30% lower cost-per-engagement (CPE), a 40% higher average engagement rate (ER) and a 118% higher lift in brand mentions than brands that advertised for 10 days or fewer.

In 2014, advertisers’ average Promoted Tweet engagement rates stayed above 4% throughout the tournament, even on non-game days.

Daily brand mentions were highest when brands advertised on both TV and Twitter: on days that brands took a TV x Twitter approach, they saw an 8X higher lift in mentions than on days they didn’t invest in either media.

For more inspiration on how to Tweet during live televised events, read about how brands Tweeted during the 2015 Super Bowl and the 2015 #Oscars.