#NBA fans: Where are your team’s followers?

If you think you know where NBA fans of each team live, you may be surprised. Our new NBA Twitter fan map shows the followers of all 30 teams in the U.S. and Canada.

In October, we posted a map showing where @NFL team fans on Twitter are located. We built this @NBA map in the same way, by looking at the official Twitter accounts for each team, using their followers as an indicator of allegiance (as opposed to, say, instances in which people mention a team while watching an interesting matchup or talking about a team’s rival).

Explore this new interactive map, which was built by Twitter data visualisation scientist Krist Wongsuphasawat, that reveals which teams dominate each U.S. county, and how their reach can spread across North America.

The primary view shows you which team is followed most in every U.S. county or Canadian regional district: 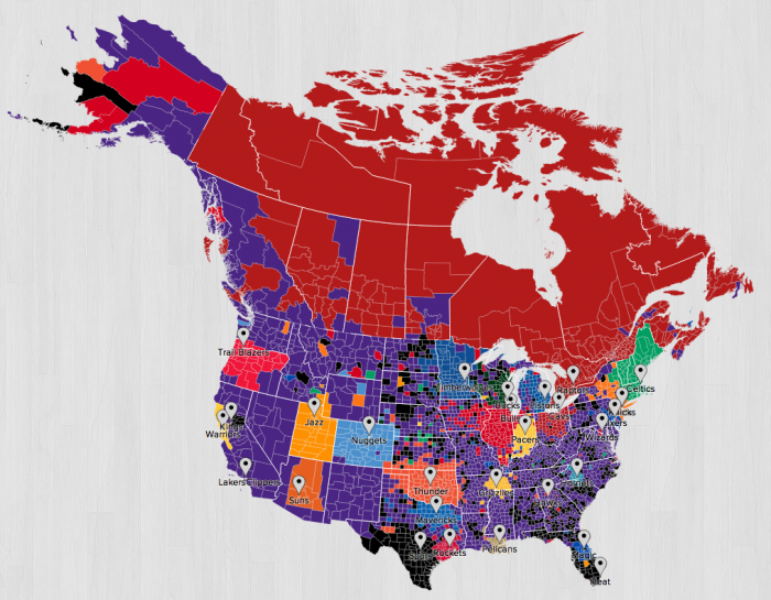 The map illustrates where one team’s fan base ends and another’s begins, and how it varies across the continent.

Here are several more ways to view and explore the map:

Each view of the interactive visualization has its own unique URL for you to share. For example, look at this map for the San Antonio @Spurs, the winners of last year’s @NBA finals.

Here are a few (of the many) trends we noticed during our own exploration of this visualization: 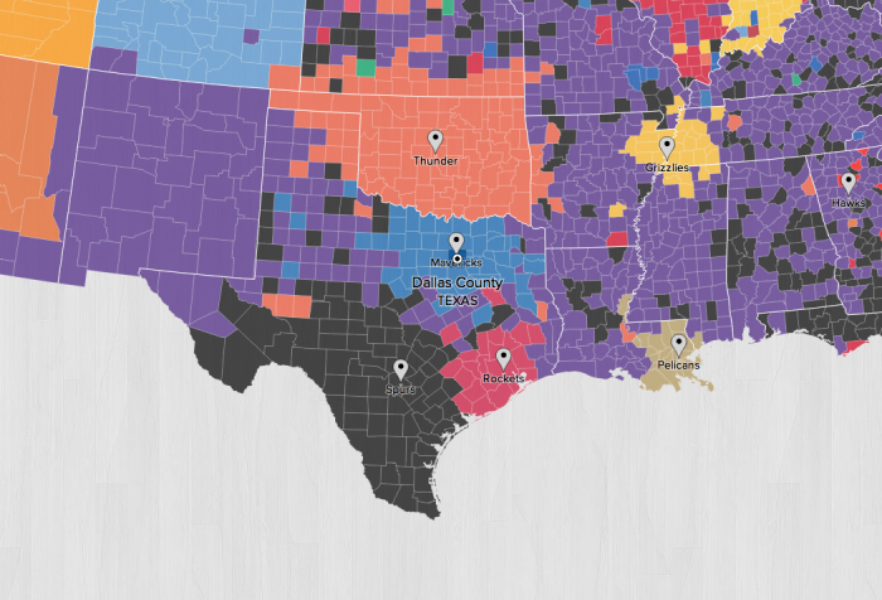 The San Antonio @Spurs may be the reigning champions, but they have to share Texas with four other teams showing strong support in the area. The @dallasmavs own the counties around Dallas (up to the Oklahoma border where it turns into @OKCThunder territory), while the @HoustonRockets are the top team in the eastern counties surrounding Houston. Other portions of the state see loyalties divided between the @Lakers and the @OKCThunder.

@KingJames’s teams past and present 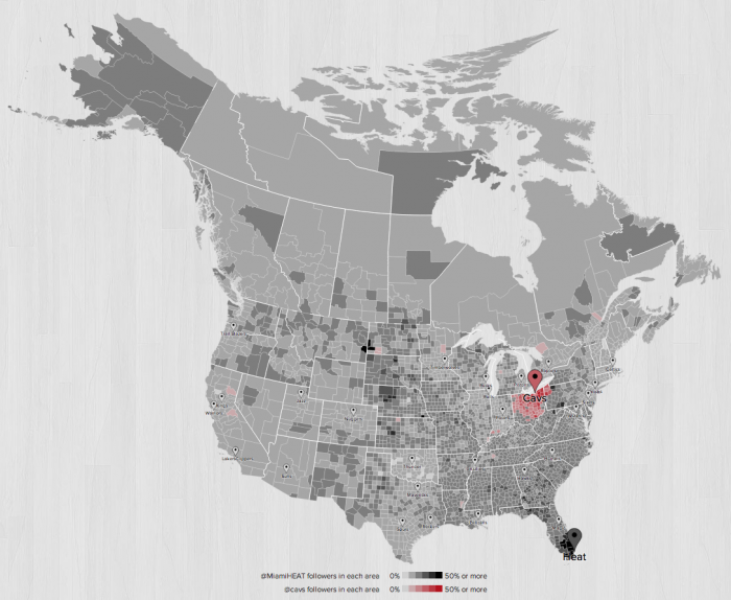 When LeBron James (@KingJames) announced he was leaving the @MiamiHeat and returning to the Cleveland @Cavs back in July, it caused a storm of conversation on Twitter and certainly helped boost the national Twitter following of the Cavaliers. However, as it stands now, he has moved from a team with national support on Twitter to a team which mainly dominates Ohio, almost within state lines. 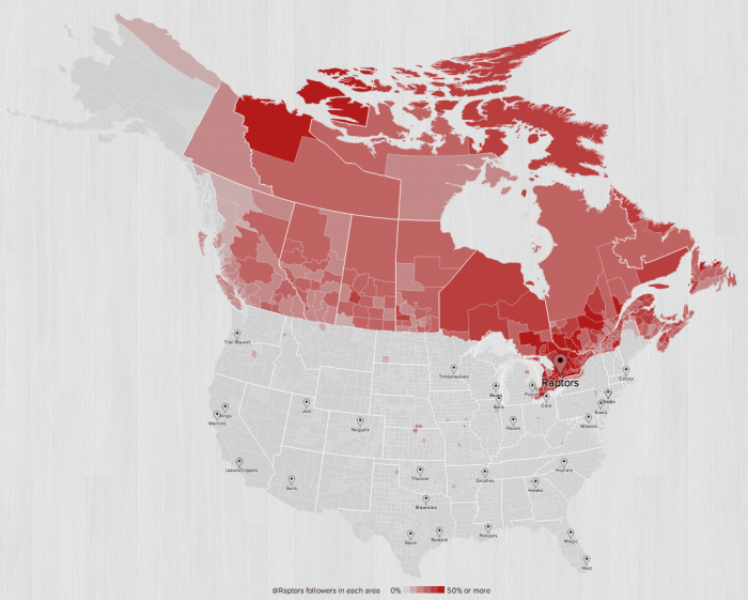 From Montreal to Vancouver to the wilderness of Nunavut, there’s one team ruling northernmost North America: the Toronto @Raptors, the only Canadian team to play in the NBA. While that support is concentrated around Toronto, the whole country appears to be rooting for the Raptors – except, that is, for British Columbia. B.C. is split almost evenly between the Raptors and (the LA) @Lakers, which has also made inroads into Manitoba.

The battle for California 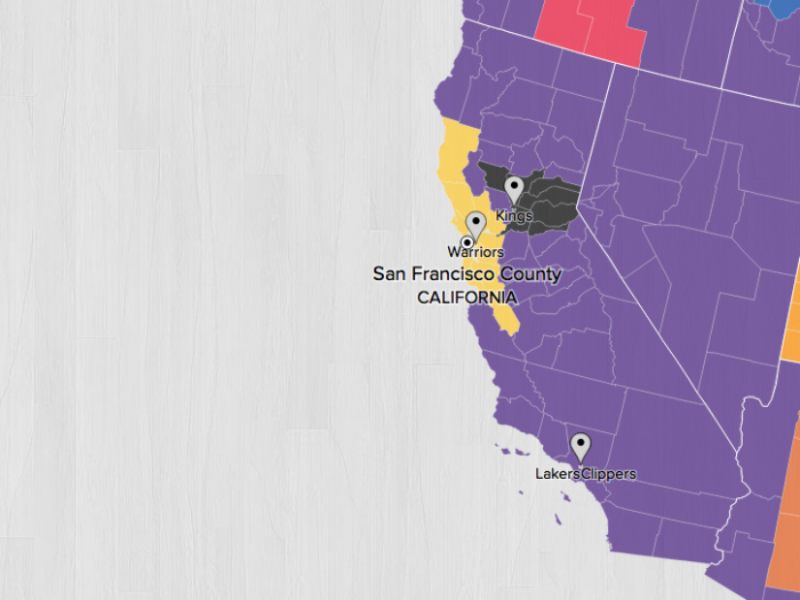 The @Lakers dominate the state of California (a state with a league-high four @NBA teams), to the extent that the city’s other team, the @LAClippers, do not top a single county in the U.S. The patterns for Twitter followers mostly follow regional lines around the team’s home – with the Golden State @Warriors having the most followers in the strip east, north and south of San Francisco and the @SacramentoKings leading in the counties around the state capital.

The story of the @Lakers in California is replicated across the whole of the United States: the team is no.1 in more counties than any other team in the @NBA.

Each view of the interactive map can be Tweeted or embedded by clicking either the ‘Tweet this view’ or ‘Embed this view’ buttons at the top of the screen.