People love to Tweet about their daily lives — and owning or shopping for a car is no exception. In fact, new research conducted by Canvs (@canvstv) on behalf of Twitter found that there are over 327K Tweets every day about shopping, owning, wanting and loving cars. What role does this steady stream of Tweets play in the car buying process?

To find out, we partnered with Canvs to analyze branded and unbranded car conversations that are public on Twitter, Facebook and Tumblr over 12 months. Canvs then identified and quantified the top topics and drivers of conversation, and sorted them all into the various steps consumers take when purchasing a new car.

The resulting research revealed that auto conversations on Twitter happen in real time among real shoppers with real intent. Here are the three key takeaways for auto advertisers to better align their Twitter strategies with the stated — and Tweeted — wants and needs of their customers.

On Twitter, people around the globe connect with major events as they unfold. But real time on Twitter also means people use the platform to talk about everyday moments related to shopping and owning cars — i.e., I love this feature of my car, my car is reliable, don’t buy this car, etc. According to Canvs, auto conversations on Twitter are evergreen and consistent throughout the year. 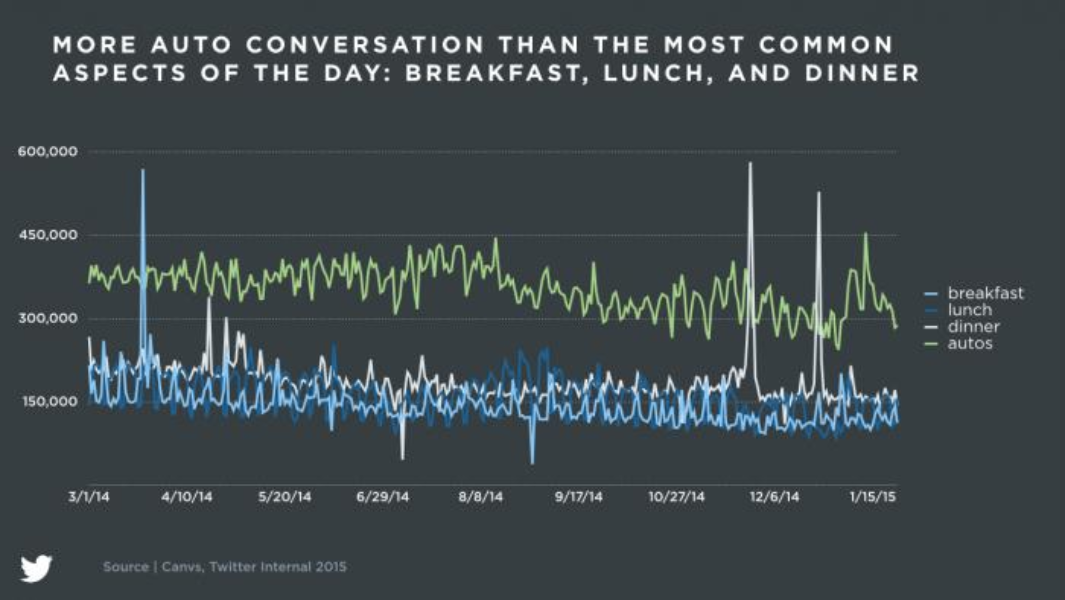 Twitter is also a place for users to express their excitement about seeing brands on the road in their everyday lives. There are over 2.4 million “car spotting” Tweets per year — 3% of which mention the phrase “dream car.” Since Twitter is a mobile-first platform, it makes sense people turn to Twitter to instantly express that excitement. 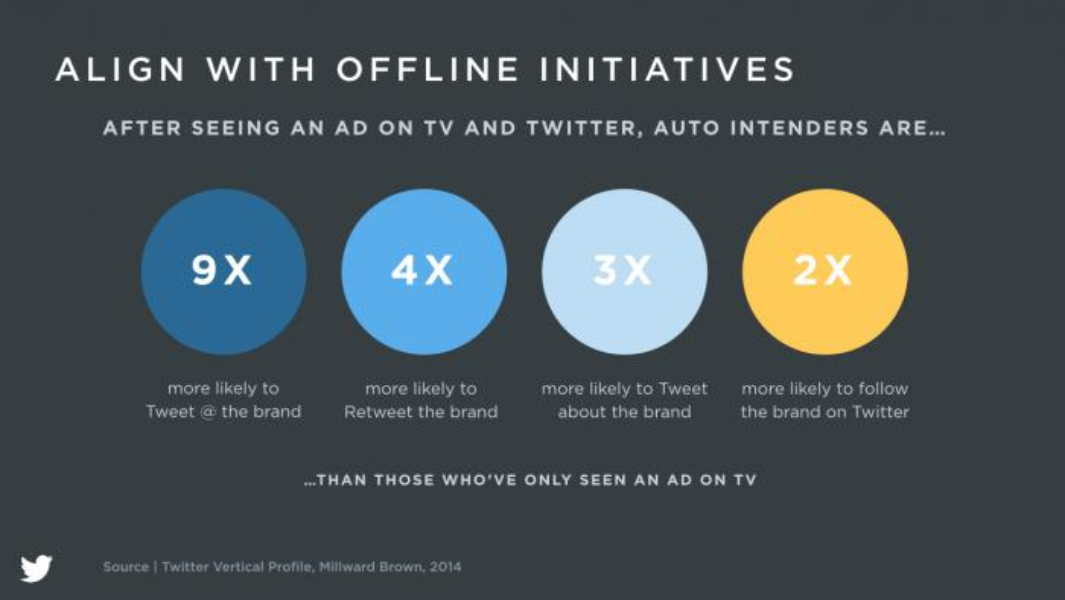 Advertiser takeaway: Stay top of mind with an always on content strategy on Twitter. Drive engagement by connecting your brand to practical, daily moments people share about their cars. Give people a reason to Tweet by creating brand moments and real-time experiences using tools like Periscope and native video.

Over 75% of auto conversations on Twitter are consumer driven. That means most Tweets aren’t from influencers or brands — instead, it’s real people on Twitter in the (conversation) driver’s seat who are actively engaged with the auto category as owners and shoppers.

When people want to share their feelings about cars, they turned to Twitter. We found that Tweets about ownership and recommendations outweigh discussion about finding the “best deal” by a ratio of 4:1. That means Twitter shoppers are using the platform for meaningful conversations about cars; they aren’t just discussing discounts or sales. 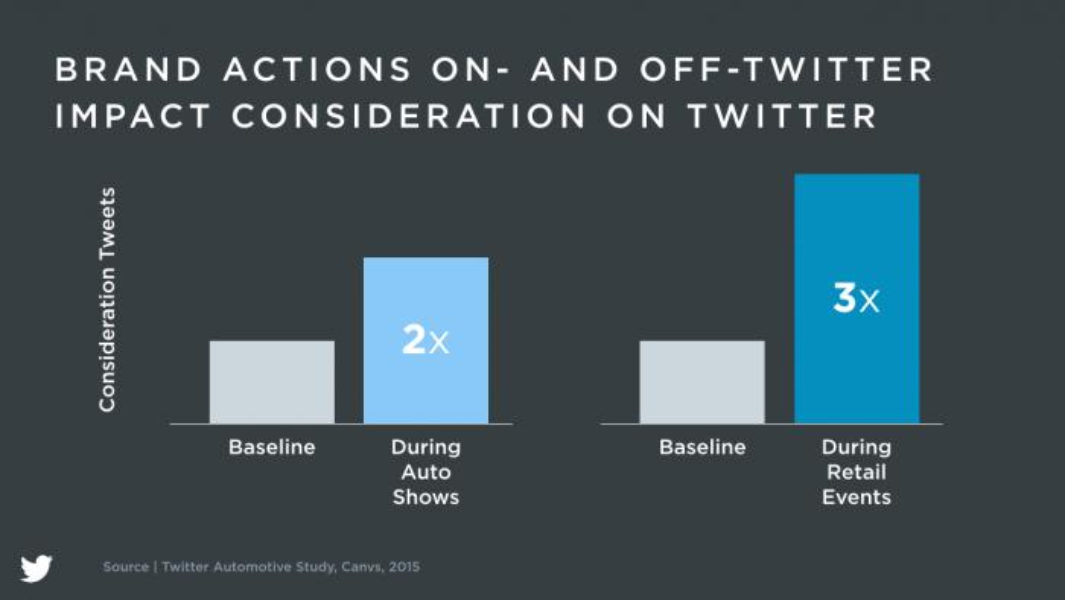 Advertiser takeaway: Be part of the ownership experience by connecting with proud owners of your vehicles. Engage with relevant conversations beyond just mentions of your brand. Be proactive and tap into the excitement that consumers express around specific features and benefits.

So at what point does the conversation shift from awareness and excitement into consideration and intent on Twitter? Overall, we found 60% of the shopping conversations on Twitter are “pre-purchase” while 30% of the conversations occur “during purchase.” Essentially, Twitter plays a role throughout the automotive purchase journey.

But Twitter offers brands a unique opportunity to influence purchase decisions in real time. On average, @canvstv found in-market shoppers tend to Tweet their intent 72 hours before making a purchase. Moreover, almost half of car shopping conversation calls out a specific experience someone they know had with a make or model. 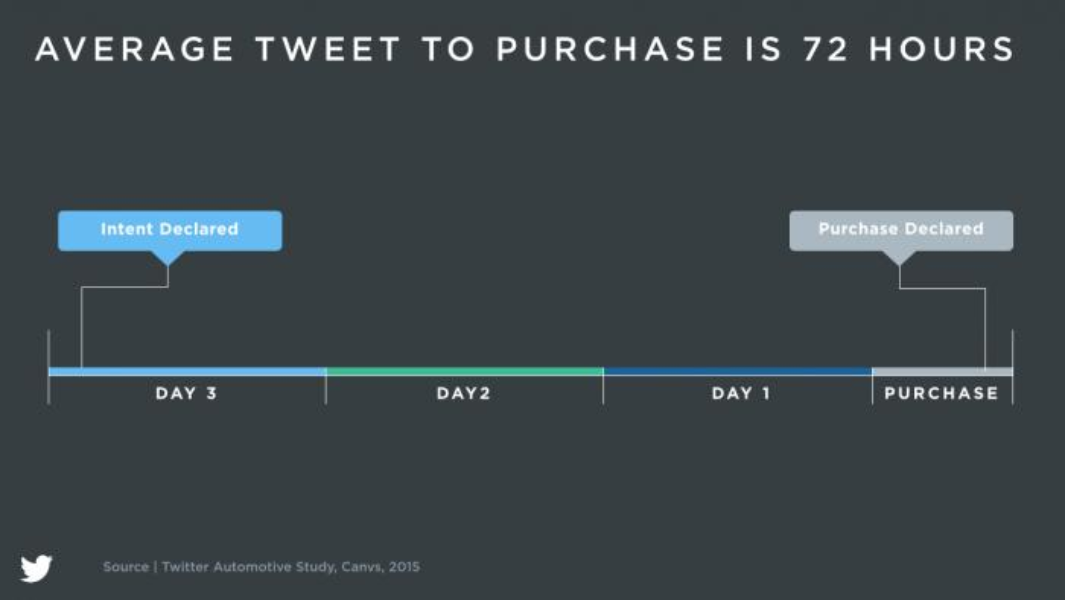 Once users make the purchase, they take full advantage of the platform to share media forward content showing off their new cars. There are over 2.2 million Tweets every year with people showing off their cars on Twitter — and 23% of these new car photos include the proud new owner in the picture.

Every day, auto owners and shoppers are having rich conversations on Twitter that signal both affinity and intent - which gives brands an incredible opportunity to use Twitter to influence auto consumers at every stage of the purchase funnel. Share compelling content that Twitter users crave, and focus on what makes your cars unique: innovation, performance, and features. Make sure to align your Twitter strategy to sales events and new model year reveals, as well as offline initiatives like TV investment. And lastly, engage with people who display strong in-market signals, such as those who follow, interact with, and Tweet about your brand.