Recent research shows that Twitter users love to watch, discover, and engage with video. With 90% of Twitter video views happening on mobile, this is an ideal way to reach consumers in real time, wherever they are. Promoted Video also drives consumer action — Twitter users exposed to a branded video have 28% higher purchase intent than the online norm.*

In May, we partnered with Dentsu Aegis Network and Nielsen to uncover what kinds of Promoted Video content influence Twitter users at various stages of the purchase funnel. The Twitter users who participated in our study were over 18, an even split of men and women across demographic and geographic sets. By analyzing a variety of signals from eye movement to survey response measures, we identified which characteristics of Promoted Videos significantly shifted both the behaviors and attitudes of Twitter users.

Here are the key findings: 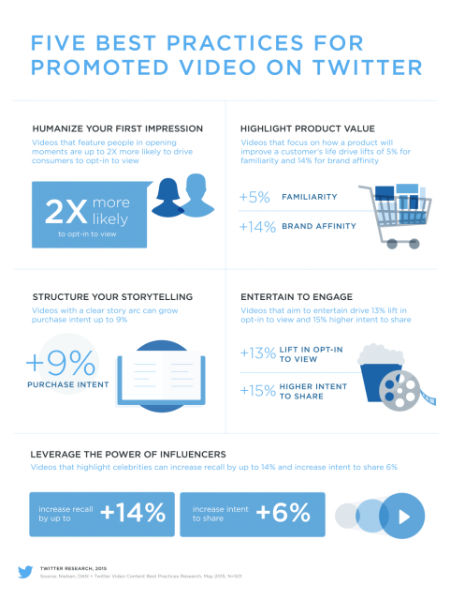 1. Make a human first impression to draw consumers in

Humanizing your brand on Twitter is an evergreen best practice because it consistently drives engagement. It’s not surprising that Promoted Videos featuring people in their opening scenes (especially those with a closeup on faces) are up to 2X more likely to drive consumers to opt in to view beyond the first few seconds of video play.

Brand spotlight: Reebok exemplifies this with its #BeMoreHuman campaign via a Promoted Video that also happens to focus on the human form. The striking visual of three people walking on their hands drew viewers in at a rate nearly double the average.

Take a new point of view on the world. #BeMoreHuman https://t.co/C78yJ44b9B

2. Highlight how your product delivers value to increase recall

The study found that Promoted Videos that clearly illustrated how a product/service can improve a consumer’s life had an impact on upper funnel brand metrics. Specifically, a focus on the utility or impact of product on the lives of consumers drove a 5% increase in familiarity and a 14% lift in brand affinity.

Brand spotlight: In this Promoted Video, Microsoft positions the usefulness of its Surface product and the value of its features for consumers who are shown integrating it into their daily lives in several scenarios. This creative approach drove strong performance versus norms for both lifts in familiarity (2X the average) and recall (5% above the mean) among Twitter users.

Meet the new Surface 3, a perfect balance of performance and value. From $499. Pre-order now: http://t.co/gMUrwk5sya https://t.co/6LkmEKQYmD

Twitter users are savvy consumers. They don’t want to feel like they are being sold. They want a story that draws them in. We’ve found that Promoted Videos with a clear story arc can improve lower funnel metrics. This type of content drove a particularly impressive 9% lift in purchase intent, showing that content can directly influence sales.

What does that mean for advertisers? Create videos that include a clear beginning, middle, and end. Take consumers on a narrative journey and deliver a resolution. This approach tends be the most successful in making a lasting impression and driving earned impressions through Retweets.

Brand spotlight: For its #PricelessSurprises campaign, MasterCard created Promoted Videos that were long-form stories with a clear story arc. The GRAMMYs video took viewers through a day-long VIP experience for four cardholders building up to a big surprise. For recall and intent to share, this content outperformed videos that gave users only a teaser of campaign messaging.

4. Serve up high-energy entertainment to engage

Twitter users love to be entertained. That’s why Twitter is a particularly effective platform for media and entertainment brands. Promoted Videos in this vertical, including 60-second TV and movie ads, tend to increase intent to share by up to 15% and lifts unaided engagement (or opt in to view) by 13%. Brands in more traditional categories were able to deliver similar results by creating Promoted Videos that mimicked the evocative tone and high energy of television and film promotional spots.

Brand spotlight: This Promoted Video from USA Network for a new series is just 15 seconds but packs in compelling visuals and sounds that quickly get the viewer’s adrenaline pumping. The fast pace and evocative storytelling capture attention, entertain, and keep us interested in learning more. In fact, this spot drove an increase in conversion intent 3.3X greater than the norm, while lifting the likelihood to recommend at a rate 2.4X above average.

Lives are on the line. What would you do? #Complications premieres Thursday, June 18 at 9/8c. https://t.co/xLcLTLYTDg

Videos that highlight celebrities or influencers can improve brand health, boasting recall up to 14% above benchmark and intent to share 6%. Be sure to establish brand context through visual or audio cues to reinforce the connection between the influencer and brand.

Brand spotlight: @PaigeDenim used Promoted Video to give Twitter users an exclusive look at its spring collection and behind-the-scenes footage of its celebrity spokesmodel Rosie Huntington-Whiteley (@RosieHW) shooting the spring campaign. The video shared a sweet and serendipitous story about how founder Paige Adams-Geller and Rosie first met years ago. It was an intimate first look into the partnership. Twitter was the #1 referring social site to Paige.com during its spring ad campaign.

Promoted Videos can successfully shift consumer attitudes and drive action throughout the purchase funnel. To maximize engagement with Twitter users, focus on images of people or product value in the opening moments of video play. Promoted Videos that deliver clear story arcs and leverage the power of influencers can also improve purchase intent and increase shareability. Advertisers across verticals can borrow a page from film and TV by focusing on delivering entertainment value instead of strictly selling.

By focusing on these simple five creative elements, advertisers can optimize their Promoted Video campaigns for success with consumers on Twitter. To learn more about video best practices, visit Twitter video.