When it comes to the box office, this summer may be hotter than ever. Our latest research, commissioned from Nielsen, shows that 39% of U.S. moviegoers surveyed plan to watch more movies this summer than last. How are these cinephiles learning about upcoming blockbusters? Many say a top source is Twitter, where marketers are enticing users with sight, sound and motion, from Promoted Video trailers to cast Q&As.

In mid-March, we commissioned Nielsen to conduct an online survey of more than a thousand U.S. moviegoers, ages 13-54. Our goal was to explore how people are already engaging with upcoming summer movies on Twitter to understand Twitter’s influence on summer movie awareness. Read on for the results, and to find out how you can use Twitter’s newest features to engage and mobilize audiences throughout the summer.

Twitter users are big movie buffs
Moviegoers on Twitter are a valuable audience for film marketers. In the study, these fans reported that they plan to see a median of five movies this summer — 25% more than the average moviegoer surveyed.

What’s more, Twitter film fans aren’t passive viewers. Their frequent interactions on the platform mean they’re also key influencers: 39% of users said they have Tweeted about a movie, 32% have Retweeted a movie-related Tweet and 26% have replied to a movie-related Tweet.

Tip: Increase your reach by inviting users to Tweet about your content. For example, Marvel Entertainment (@Marvel) teamed up with @drpepper to invite users to Tweet the name of their favorite Avenger. When a large number of fans had done so, @Marvel rewarded them by unlocking a new “Avengers” video. 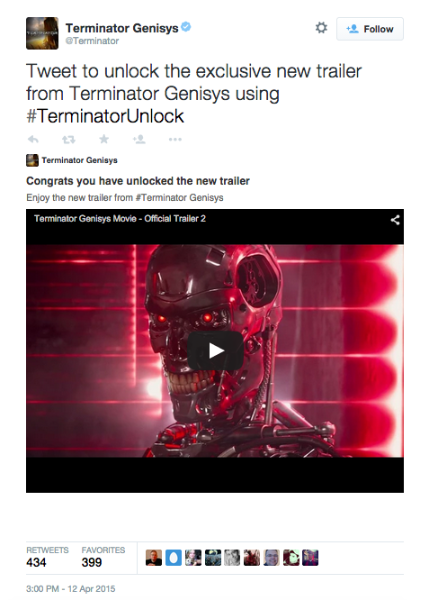 Moviegoers rely on Twitter for the latest movie info
Given Twitter users’ passion for movies, it’s not surprising that they’re already more aware of summer movies than non-users. On average, 58% of Twitter users are aware of the upcoming 19 summer flicks we asked about, compared to 41% of non-users.

As expected, our study indicated that awareness was already high for summer movie sequels. We found that on average, 60% of moviegoers were aware of upcoming sequels, such as “Avengers: Age of Ultron” and “Mission: Impossible - Rogue Nation.”

Tip: Our research shows that about one in four moviegoers on Twitter start paying attention to movie-related content at least a month before the film’s release. To build awareness, seed movie-related content early on Twitter. For instance, last August, actress Michelle Monaghan sparked interest in @SonyPictures’ 2015 “Pixels” when she sent this Tweet from the set.

Tip: Since many (63%) of the Twitter users surveyed are hoping to watch summer film trailers on Twitter in the coming weeks and months, studios can capture their attention with a Promoted Video preview.

Earlier this month, @Legendary shared a trailer for this summer’s “Straight Outta Compton” via a Twitter account devoted to the movie:

And a few days ago, actor Chris Pratt (@prattprattpratt) Tweeted a trailer for @UniversalPics’ much anticipated “Jurassic World.”

Twitter cast Q&As sustain engagement
When asked what factors will make them choose to see a film this summer, users said that cast, action and franchise appeal are what matter most. Given that the cast is a top driver, it’s no surprise that Twitter users are eager to interact with cast members on the platform. Many (41%) Twitter users agreed that Twitter provides a platform to connect directly with actresses and actors, and nearly half of Twitter users said they plan to participate in a cast Q&A in the future.

Tip: Generate buzz by scheduling a cast Q&A. For example, cast members from @TheLongestRide, a new @20thcenturyfox romance, recently thrilled fans by answering questions about everything from their go-to karaoke songs to the funniest moment on set. Because it was based on a bestselling book by @NicholasSparks, the movie had a built-in fan base on Twitter, and creating a Twitter chat helped the studio reach them effectively.

Furthermore, having @younghollywood, a news outlet with more than 2M followers, host the Q&A meant that @20thcenturyfox connected with an even larger audience.

Methodology
In mid-March, we collaborated with NRG, Nielsen Content’s film division, to understand moviegoers’ awareness of and desire to watch upcoming summer films, and to explore how people are engaging with summer movies on Twitter and other media platforms. The commissioned study included a 20-25 minute online survey with questions about 19 upcoming summer movies to more than a thousand U.S. moviegoers ages 13-54. A moviegoer was defined as someone who had seen at least one movie at the theater in the past six months.