People around the world Tweet about food or eating 72 times per second* – and dining brands have long found creative ways to join the conversation. In 2014, @Wendys told us it engaged millennials and achieved sentiment change by transforming Tweets about its Pretzel Bacon Cheeseburger into @BoyzIIMen love songs. More recently, @OliveGarden started using Twitter to reinforce its reputation as a date night destination. The national chain invited people to Tweet with the hashtag #AskAlfredo to get romantic advice, and many are taking them up on it.

Now we’re seeing an even newer trend: Dining brands are using Twitter not only to increase reach, improve sentiment, and boost engagement – but also to drive conversions.

For instance, @SUBWAY is using Twitter to increase installs of its mobile app. Here’s an example of what the brand’s mobile app promotion Tweets look like: 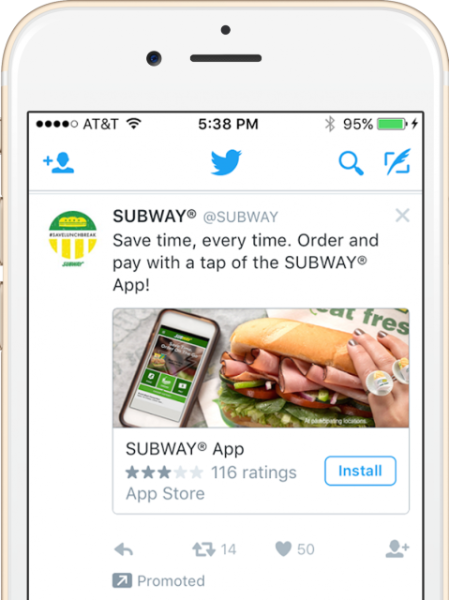 Image used with permission from @SUBWAY

Customers who click the Tweet to install the app can then find the nearest @SUBWAY location, order a sandwich, and pick it up in just 15 minutes. Their credit card details are stored on the app so that when they arrive at the restaurant, all they need to do is flash a QR code to complete the transaction.

Why is Twitter an appetizing place for @SUBWAY and other dining brands to drive mobile app installs? Our newest consumer research, conducted in partnership with DB5, provides some answers.

People on Twitter are a prime audience for dining brands, because when they crave a slice or a sandwich, they’re more likely than the average person to use an app to place an order. Dining enthusiasts on Twitter download nearly 50% more dining apps — and spend 45% more money on them — than consumers who don’t use the platform.

Twitter dining enthusiasts explain that they prefer opening an app to navigating the web or dialing a restaurant because apps provide a fast, easy way to access information, place orders, and pay for transactions. 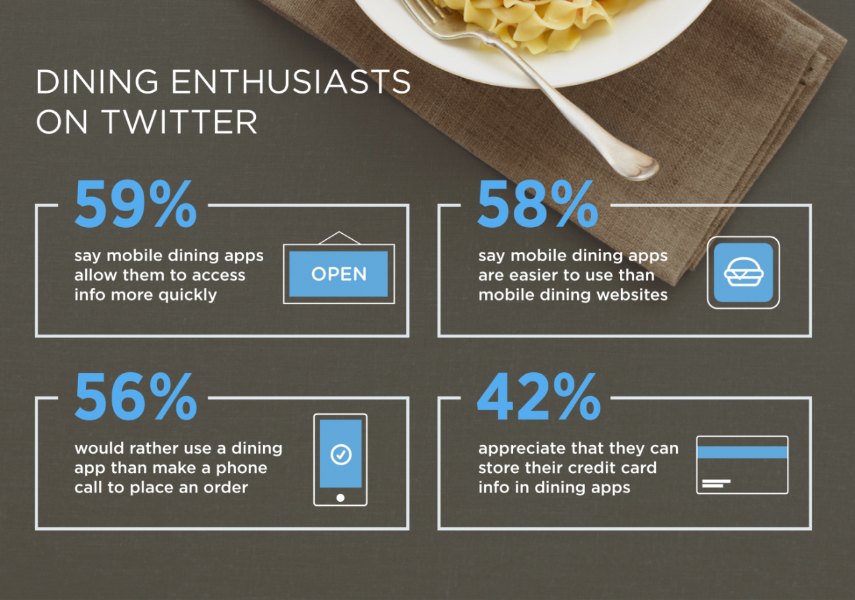 Twitter enables dining brands to connect instantly with a large number of people who are eager to learn about them. Most (61%) dining enthusiasts on Twitter say they rely on social media to find out about mobile dining apps, and dining brands on Twitter can connect with more than 700M people across the globe on Twitter and the Twitter Audience Platform.

Six ways to tantalize the dining app audience on Twitter

In addition to conducting research with DB5, we looked at Twitter’s best performing mobile app promotion campaigns to identify the key ingredients of an irresistible mobile dining app. Here’s a recipe for increasing the likelihood that Twitter users will download — and regularly consume — your app.

Make it easy: Consumers want convenience. Limit the number of steps it takes for users to find a location, place an order, or make a payment.

Differentiate early: Attention spans are short. Whether your key value proposition is healthy food, speedy service, or a romantic atmosphere, make that clear up front.

Emphasize security: Consumers are becoming increasingly comfortable with mobile payments, but they still want to know that their payment transactions are handled with care.

Reward loyalty: Consumers like to feel special. Consider offering repeat guests an exclusive membership or points that can be redeemed for meals.

Encourage advocacy: Give consumers a reason to share and spread your brand message, whether by Tweeting humorous content or using gamification.

The study
We worked with DB5 to conduct a 15-minute online survey of 2,000 Americans age 13 or older about how they use mobile apps. Half were Twitter users, and half were non-users. A user was defined as a person who signs on to Twitter at least once a month. Dining enthusiasts were defined as people who have downloaded at least one mobile dining app.