The #NFL conference championship games featured an amazing overtime comeback in the NFC and a dominating one-sided performance in the AFC, and of course all the action on and off the field was discussed on Twitter.

The Seattle @Seahawks look to defend their championship when they face off against the New England @Patriots in the @SuperBowl on Sunday, Feb. 1.

The first game of the day was an instant classic that saw the Seahawks make a successful onside kick en route to a walk off 28-22 win over the Green Bay Packers in overtime.

The game got off to a sloppy start when Green Bay QB Aaron Rodgers (@AaronRodgers12) and Seattle QB Russell Wilson (@DangeRussWilson) traded early interceptions. After a pair of Mason Crosby (@crosbykicks2) field goals put the Pack up 6-0, Green Bay extended the lead to 13-0 when Rodgers found Randall Cobb (@rcobb18) for a 13-yard TD pass as the first quarter ended.

Ha Ha Clinton Dix (@haha_cd6) paced the Packers defense with two interceptions in the first half:

Down 16-0, Seattle struck first in the second half to cut the Green Bay lead to 16-7 when they converted a fake field goal into a touchdown. Check out the replay below that shows @Seahawks punter Jon Ryan (@JonRyan9) connecting with rookie offensive lineman Gary Gilliam (@Garry_Gilliam) for the 19-yard TD.

Crosby’s fourth field goal extended Green Bay’s lead to 19-7 with less than 11 minutes left. After back and forth punts, Wilson threw his career-high fourth interception of the game. But Seattle closed in within six when Wilson ran in for a one-yard score.

Seattle then secured the ball on an onside kick attempt with under two minutes left in the game. Thanks to Marshawn Lynch’s (@MoneyLynch) 24 yard TD run and Luke Wilson’s (@LWillson_82) two-point conversion, the @Seahawks took a 22-19 lead with 1:25 left in the game.


Rodgers and the Packers marched down the field to set up Crosby, who nailed a 48-yarder to tie the game at 22 and send the game into overtime.

Seattle won the toss and never gave the ball back as this 35-yard TD pass from Wilson to Jermaine Kearse (@ChopChop_15) was the game-winner, sending the @Seahawks back to the Super Bowl.

NFL players chimed in on the great game:

As did some former greats and @KingJames:

Seattle players were thankful after the big win:

Head coach Pete Carroll was too:

The Packers and players also thanked fans for a great season.

While the NFC was won in heroic fashion, the AFC saw the New England @Patriots dominate the Indianapolis @Colts 45-7 to earn a trip back to the @SuperBowl.

The Pats struck first on a LeGarrette Blount (@LG_Blount) one-yard TD run and extended their lead to 14-0 late in the first quarter when Tom Brady found James Develin for his first career TD reception.

After a Brady interception, QB Andrew Luck led the Colts on a TD drive that ended with a Zurlon Tipton TD run.

In the second half, New England scored on the first drive to go up 24-7 when Brady connected with offensive lineman Nate Solder for a 16-yard TD. And they went up 31-7 on a Brady to Rob Gronkowski (@RobGronkowski) score.

Players from the @Colts also turned to Twitter after the game:

Here are the most-mentioned team accounts on Twitter during the conference championships (Sunday, Jan. 18):

Click on the image below to explore this data visualization that features the most-mentioned players and teams (and related Tweets) from the conference championships (Sunday, Jan. 18). 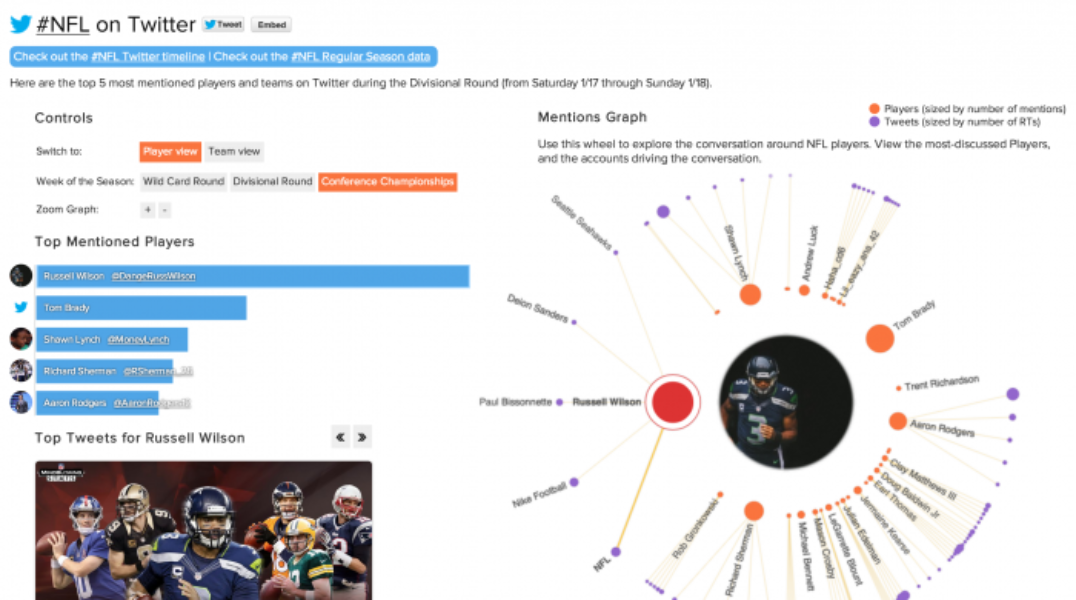 Here are the most-Tweeted games during and around live telecasts from the divisional playoff weekend based on number of Tweets, as measured by Nielsen Social (@NielsenSocial).

Come back next Thursday when we preview the best ways to follow the #NFL @SuperBowl between the @Seahawks and @Patriots.