Football is back! The #NFL season kicks off tonight as the defending Super Bowl champion @Patriots host the @steelers in the 2015 NFL kickoff. And this season Twitter will once again serve as your home turf for all things on and off the gridiron.

Twitter brings you closer to the #NFL
From kickoff tonight all the way through #SB50, you’ll want to follow @NFL for video of all the best moments. In-game highlights, game previews, recaps, behind-the-scenes clips, archived footage, and more will be brought to you by our valued Twitter Amplify sponsors.

Here are a few examples from the pre-season:

What if the roar of the crowd on Twitter could determine division winners? This graphic below declares the division champs based off Tweets from the month of August that mentioned a team name alongside keywords related to “winning.” 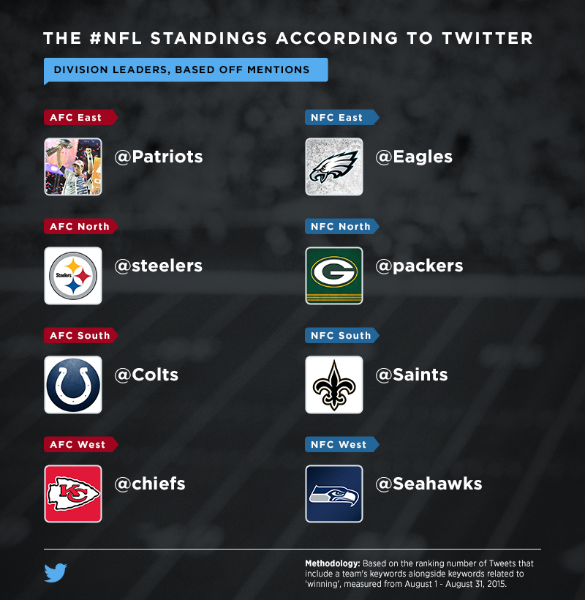 Hundreds of your favorite NFL stars — like @RobGronkowski, @CalvinJohnsonJr, and @L_Bell26 — are on Twitter and have been sharing their excitement for the upcoming season.

What if your fantasy draft was determined by Tweets? This chart looks at the top 10 most-Tweeted about players alongside keywords related to fantasy football.

Training camp on Twitter
All 32 teams have turned to Twitter to take fans behind the scenes during training camp — providing a preview of what to expect all season long.

Some teams have broke news:

Some showed fans the funnier side of camp:

Some brought you inside the huddle:

Players have also given fans a glimpse of their lives via Twitter:

Football emojis
Football is back and fans who Tweet with #FootballIsBack will see an emoji with their Tweets. And look out for more hashtag triggered emojis starting tonight before the opening game.

Weekly NFL on Twitter recap
Following the #NFL action on Twitter ensures you won’t miss a single moment of the season. But in case you do miss a big play or moment, follow @NFL and @TwitterSports for updates. You’ll also want to watch and follow the @RichEisenShow for a weekly segment every Monday on how the NFL played out on Twitter.