It’s well-known that Twitter is the ultimate companion for the TV viewer, and a study released today, “Social TV: A Bellwether for Audience Engagement,” shows that it can also be a valuable tool for TV networks, agencies and advertisers looking to better understand the total viewing audience.

In the research, Nielsen Neuro used its proprietary consumer neuroscience technology to analyze the brain activity of nearly 300 viewers as they watched live airings of eight primetime broadcast and cable shows. @NielsenSocial then compared the results to minute-by-minute Twitter activity for the same shows and found a strong correlation (79.5%) with neurological engagement, which was defined as a combination of emotion, memory and attention.

The findings present the industry’s first statistical evidence of correlation between levels of Twitter x TV conversation around live program airings and engagement for general audiences. In other words, Twitter x TV activity is representative of how engaged general TV audiences are with programming.

The chart below illustrates volume trends for the March 4 episode of Empire as measured by Nielsen, where the top Tweets per Minute align with dramatic peaks in programming. 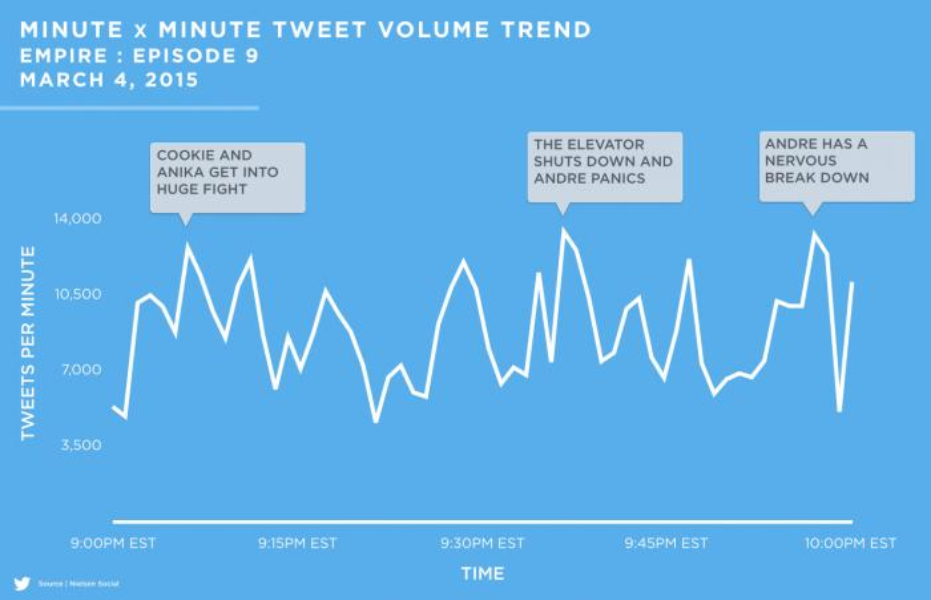 Not only can networks and media planners use Twitter x TV data to distinguish the programs that have the most potential to deliver engaged viewing audiences, but the benefits also cross over to brands and marketers as prior Nielsen research has shown that ads perform better on memorability in TV shows with high audience engagement.

We’ve seen how Twitter can influence TV behavior, build audiences and drive action, but this new research emphasizes Twitter’s utility as an insightful tool for data-driven decision making, not only on Twitter, but also around general viewing audiences.

Nielsen methodology
Analysis of minute-by-minute Twitter TV and Nielsen Neuro data was completed for eight primetime broadcast and cable TV programs ranging in levels of Twitter activity and TV ratings. Nielsen Neuro monitored the brain activity of nearly 300 study participants (21-54 years old), recruited from the San Francisco Bay Area, Chicago, and Atlanta using standard Nielsen Neuro recruitment procedures, which include a representative race and ethnicity sampling consistent with local demographic composition. Neuro data for each program was collected from equal number of males and females participants who indicated that they regularly watched the given program.

Neurological engagement was measured as the sum of indices of emotion, memory, and attention. Twitter TV Activity was measured as relevant U.S. Tweets. Since Twitter TV and neuro data fluctuate at different scales, the final analysis correlated rate of change (i.e., minute-by-minute difference in neuro and Twitter values respectively) as opposed to raw values. Twitter TV and neuro data were normalized on a minute-by-minute basis across all programs before they were averaged within each segment, resulting in 49 total segments.