Preview: #USA vs. #JPN in the #FIFAWWC final

Women’s soccer (or football) fans around the world will turn to Twitter during this Sunday’s Women’s World Cup final between #USA and #JPN. Here’s a reminder on how to follow all the action, including a look at how both teams and their players have performed on Twitter during the #FIFAWWC thus far.

All fans should follow the official FIFA tournament handle (@FIFAWWC) and dive into the global conversation using the hashtag #FIFAWWC.

FIFA is asking fans to inspire the players on both final teams by posting messages on Twitter using #LiveYourGoals. Your Tweet could be on display in the tunnel at Vancouver’s BC Place Stadium for the Final, the last thing the players will see before taking to the pitch.

And before the match, make your call on who will win the big game by voting directly from a Tweet that will be sent by @FIFAWWC.

#USA defeated #GER 2-0 in dramatic fashion in Tuesday’s semi-final, thanks to a goal and assist from Carli Loyd (@carlilLoyd).

Those rooting for the United States should follow @ussoccer_wnt and jump into the team convo on Twitter using the following team hashtags:

The team has brought fans close to the game action and the players throughout the tournament:

Japan defeated @England 2-1 in a heartbreaker in Wednesday’s semi-final after to England’s Laura Bassett (@laurabassett6) inadvertently redirected the ball into her own goal in injury time.

Japan fans should follow @jfa_nadeshiko and join the team convo with #nadeshiko and #JPN. The team has brought fans closer to the action on and off the pitch throughout the tournament.

Twitter data
Which players from #USA and #JPN have garnered the most conversation on Twitter during the #FIFAWWC thus far? This graphic shows the most-mentioned players from the two final teams (across the entire tournament), led by @alexmorgan13 and Aya Miyama. 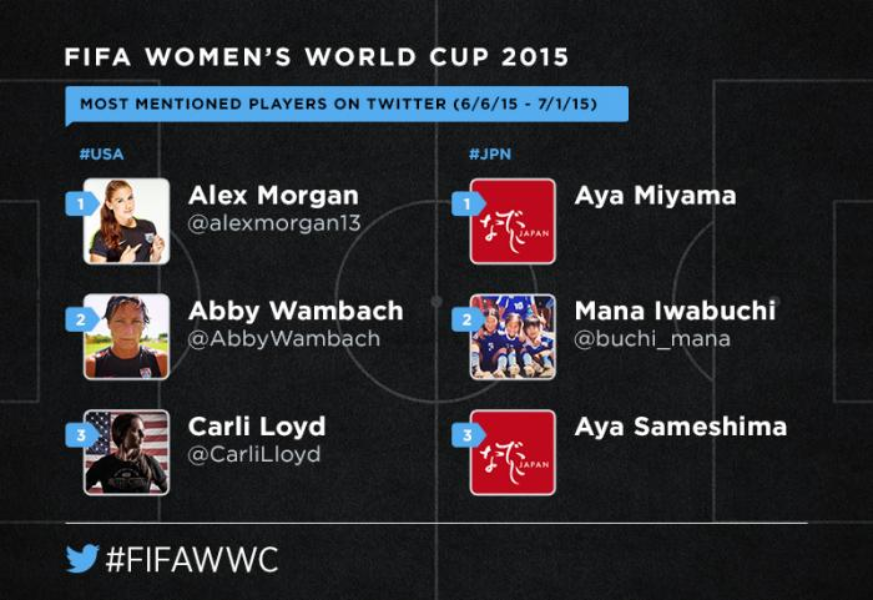 This graphic below shows each team’s most Tweeted about moment during the #FIFAWWC tournament: 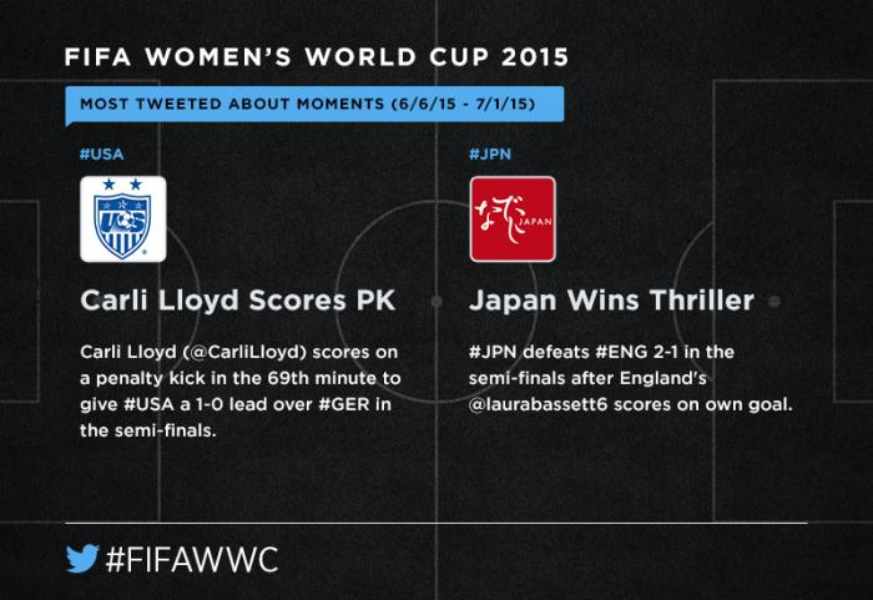 Lastly, what if Twitter could predict the winner? We analyzed Tweets measuring each team exclusively since the tournament began on June 6. When putting the #USA and #JPN head-to-head on Twitter, #USA takes home the cup with 66% of the conversation (versus #JPN’s 34%).

Fortunately, the result will come from the play on the pitch this Sunday in Vancouver. Enjoy the match and turn to Twitter for all things #FIFAWWC.