Today, we’re excited to release the Marketplace Report - a quarterly update that takes an in-depth look at trends in monetization and ad performance across the mobile programmatic ecosystem. It reflects data from the MoPub Marketplace, which is representative of over 31,000 active mobile apps, more than 264 billion monthly ad requests, more than 1 billion unique devices and 155+ demand-side platforms. Here are a few highlights from our Q1 update:

Not surprisingly, brand advertisers were the main contributors of this spend — making up 73% of overall advertising spend during the game. And we’re also seeing performance advertisers starting to invest around major events. One app developer increased spend 3.3x during the game to coincide with TV ads.

Interstitial and native ad formats increase popularity and performance
Interstitials were popular and effective for publishers in Q1. Auction volume grew 276% while eCPMs increased 19%. And native ads expanded beyond apps, where they have been traditionally successful, into new publisher categories such as entertainment, news and lifestyle. 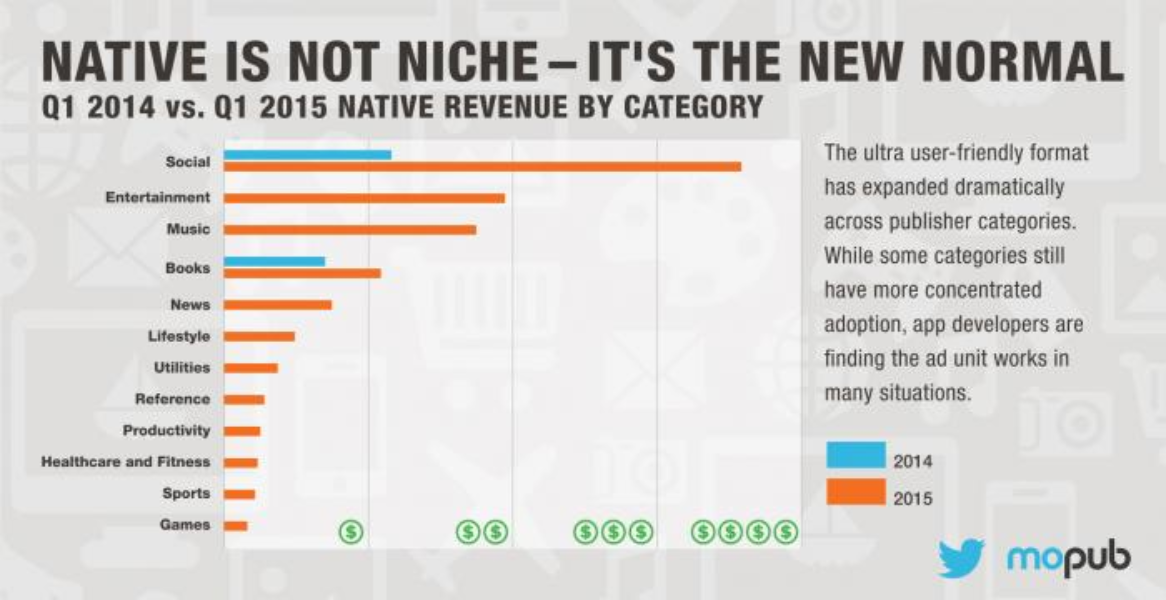 While some app categories displayed stronger revenue performance, app developers are finding that native ads are effective across broad categories.

Other highlights from the report:

The data reflected here is solely representative of quarterly trends from exchange-traded media; it does not include any ad network or ad network mediation data. MoPub does not sell advertising and does not buy inventory. The data includes quarter-over-quarter and year-over-year trends across several dimensions that impact revenue for mobile application publishers.

Also please note that the general findings here are based on internal data and data from a third party, and may be subject to errors and omissions. Each ad campaign is different.

Have questions or want more details? Email MoPub-datareports@twitter.com and we’ll be in touch. Download the full report here.