Because Twitter is a live, public, and conversational platform, we often refer to it as the world’s largest couch. As a complement to TV, Twitter is a go-to for TV audiences who want to immerse themselves in content from their favorite shows and interact with a community of fellow fans.

To better understand the way viewers use Twitter to enhance their TV experience, we were interested in exploring Tweeting patterns among TV audiences. In addition, we wanted to delve into the relationship between the content in fans’ Tweets and their propensity to Tweet more regularly about a show. Two studies released today provide some perspective.

First, Nielsen (@NielsenSocial) looked into how often TV x Twitter authors Tweet about a program during a season, and their value. For 113 different seasons of shows that ran between September 2014-May 2015 (some shows had more than one season in the time research was conducted), Nielsen analyzed the total number of new episodes in which individual authors Tweeted.

The findings demonstrated that over the course of a season, new Twitter authors jump into the conversation, joining a core group of fans who Tweet more regularly. The total number of authors over the course of a season is, on average, 10X larger than the number of authors who Tweet about a program in a given week. New voices may chime in during premieres and finales, Nielsen found.

The study also determined which shows have the highest proportion of loyal Twitter authors (those who Tweet during 3+ episodes over the course of a season). They are as follows: 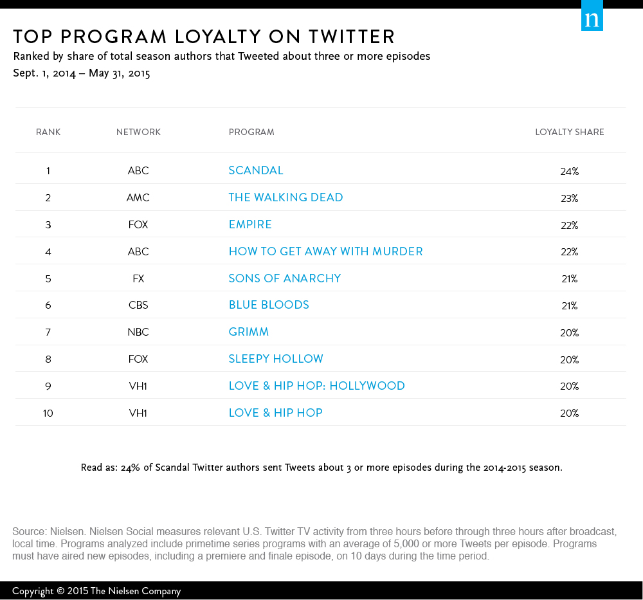 Nielsen found that loyal Tweeters exhibit different behaviors from other authors. They send almost three times more Tweets per episode, they have more followers, and they are more likely to Tweet about brands than other authors. 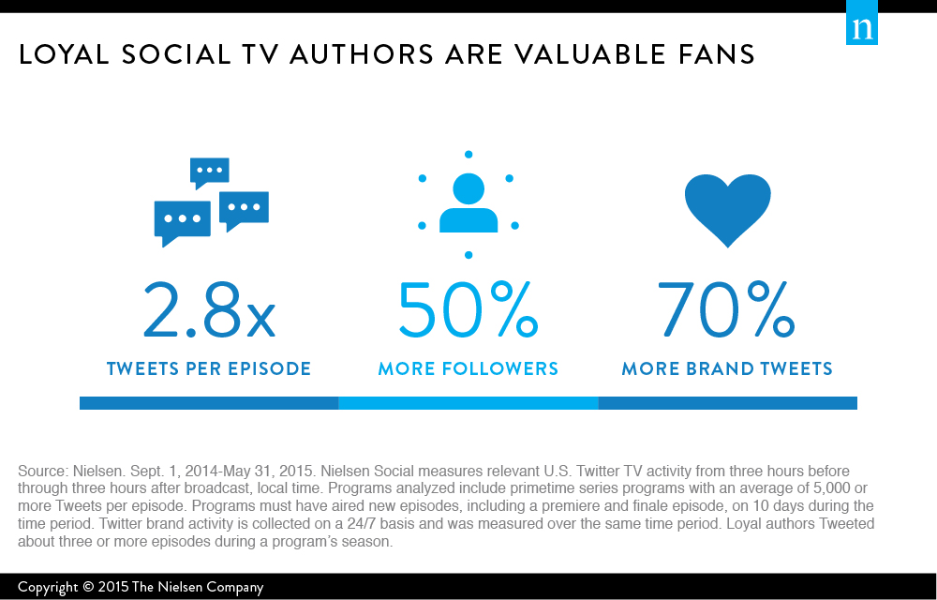 Building on these findings, Canvs (@canvstv), a social TV solution that qualifies the emotional content of TV Tweets, as tracked by Nielsen, investigated whether the emotions expressed in Tweets can provide any insight into audiences’ propensity to Tweet about more episodes. It should come as no surprise that the types of emotions expressed varied greatly across TV programming genres, so we broke things down to see how Tweets about comedy, drama, and reality competition programs corresponded to social loyalty, as defined by Nielsen.

As this analysis shows, there are certain reactions within specific genres that are desirable because they could have a relationship to higher loyalty. While influencing viewers’ organic emotions is no small feat, networks — which move their audiences every day through powerful storytelling — can augment these experiences via Twitter.