#RG15: emotions on and off the clay courts of Paris

The French Tennis Open (@rolandgarros) came to an exciting finish with @StanWawrinka and @serenawilliams winning, and the entire tournament played out on Twitter.

During the tournament (May 24 - June 7), Tweets about Roland Garros generated 4.1 billion impressions (views) on Twitter and across the web.

Men’s final
The men’s final between @StanWawrinka and @DjokerNole on June 6 was a thriller on the clay:

The victory of @StanWawrinka sparked a lot of discussion on Twitter. This map below shows how the conversation played out around the world in real time: 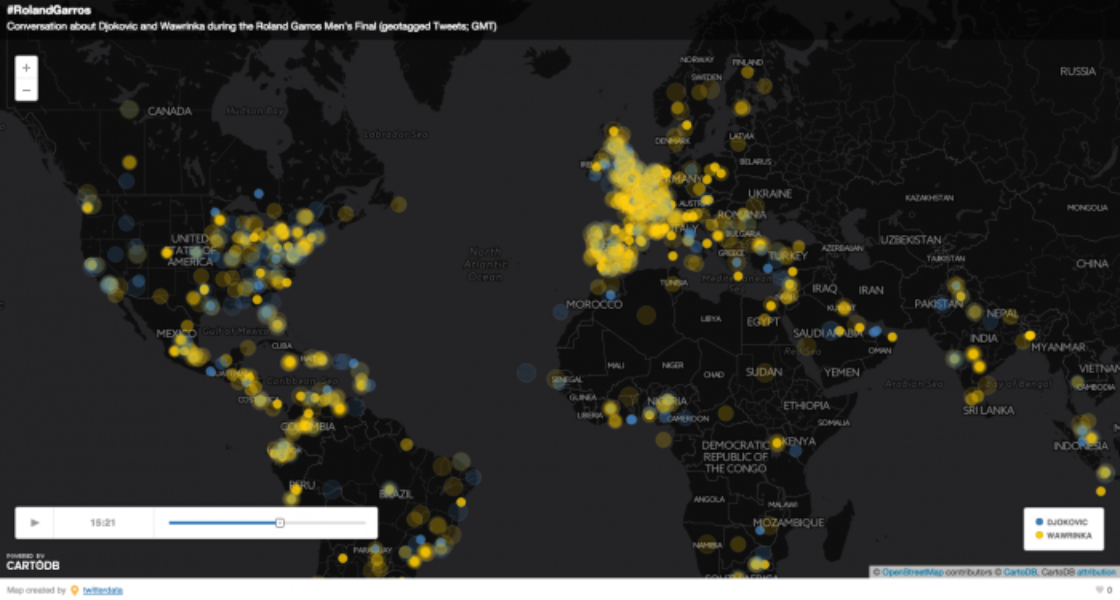 These were the moments from the men’s final that saw the biggest peaks in conversation on Twitter:

And this chart below looks at mentions of both men’s finalists on Twitter during the match:

Women’s final
The women’s final between @serenawilliams and @luciesafarova was an incredible match to watch and sparked a lot of discussion on Twitter too.

One even caught a selfie of the champ:

The most Tweeted-about moment from the women’s final was when Serena Williams won the French Open with a final score of 6-3, 6-7, 6-2.

But while @StanWawrinka and @SerenaWilliams won the competition, some players won the heart of fans on Twitter. Here are the top 5 most Tweeted-about players during the French Open:

These were the three most-Tweeted about moments of the entire tournament:

But fans will also remember #RG15 for the amazing only-on-Twitter conversations that happened throughout the tournament.

Here is a selection of more of the best moments of #RG15 on Twitter:

Fans will also remember some of the great Twitter integrations, such as #RGTweetCam, that the organizers offered tennis fans around the world:

And some of the greatest rallies of the tournament were posted by @RolandGaros for fans to enjoy:

Coming up next for @ATPWorldTour and @WTA players: @Wimbledon and the @usopen.