Look no further than Twitter to recap TV’s biggest moments of last season. As the victories, eliminations and dramatic plot twists played out on screen over the last nine months, viewers and fans took to Twitter to share their candid reactions on the world’s largest couch.

Nielsen has outlined the most buzzed-about moments of last season (September 1, 2014 - May 24, 2015) via Nielsen Twitter TV Ratings (NTTR), which measure TV x Twitter activity levels, reach and demographics. Here are the top TV moments on Twitter across all series programs, specials and sports events, ranked by the size of the TV x Twitter audience reached by program-related Tweets in the U.S.: 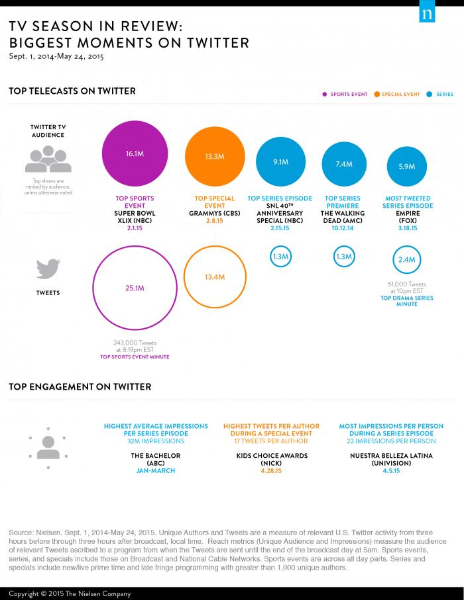 Scripted and reality TV shows saw new heights of buzz and viewed Tweets (impressions) as audiences congregated week-to-week to share moments in real time. The “Empire” (@EmpireFOX) two-part finale on March 18 generated 2.4 million Tweets in the U.S., making it the most-Tweeted series episode – not only of the season, but since Nielsen Social began tracking activity in 2011. What’s more, Tweets about the “Saturday Night Live” 40th Anniversary episode (@nbcsnl) were seen a record-setting 188 million times in the U.S. – more than any series episode to date.

Here are the shows that gathered the largest average Twitter audience this season: 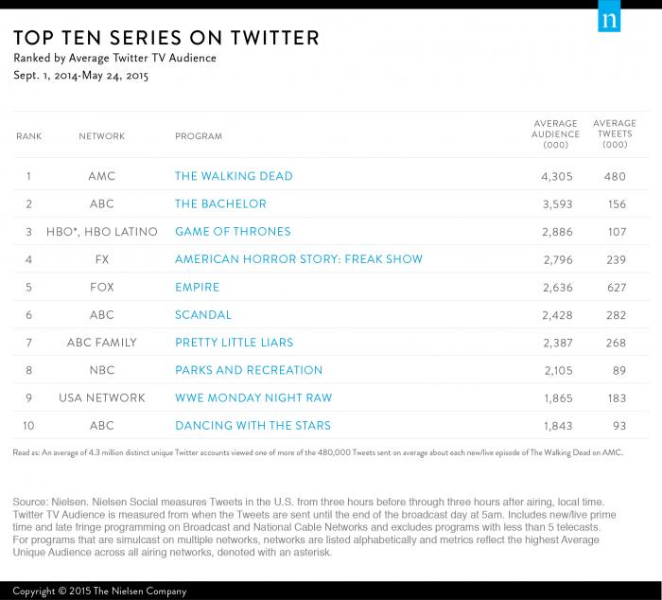 Celebrities and artists brought their followers to the red carpet and beyond during awards season this year, with “The 57th Annual GRAMMY Awards” (@TheGRAMMYs) attracting the largest TV x Twitter audience and the most Twitter buzz of all specials in the U.S.. (And do check out this interactive map to see how the #GRAMMYs conversation spread throughout the world).

Here are all of the top TV specials from this season, ranked by audience: 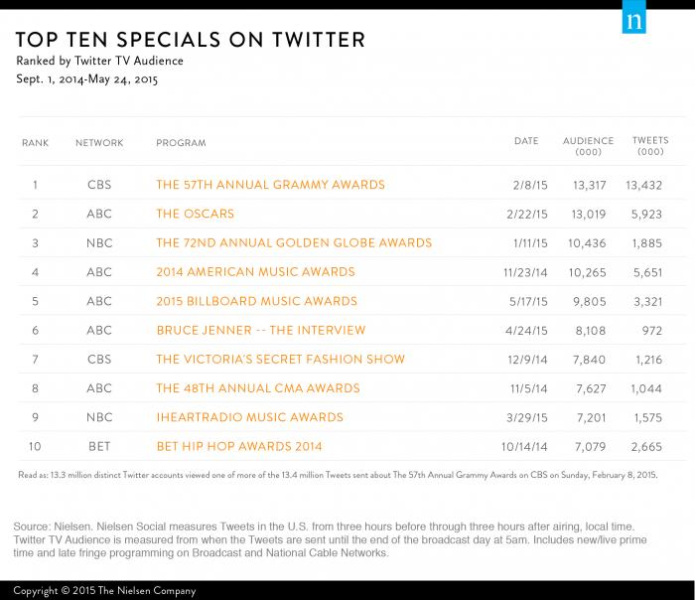 The thrilling New England @Patriots 28-24 win over the Seattle @Seahawks unfolded on @SNFonNBC for “Super Bowl XLIX,” with Nielsen reporting that 16.1 million people saw the 25 million Tweets sent about the game in the U.S.

Twitter also provided play-by-play for other huge sports moments, such as #MayPac, the NCAA Finals and the 2015 College Football National Championship.

Here are how the biggest moments in sports stacked up on Twitter this season: 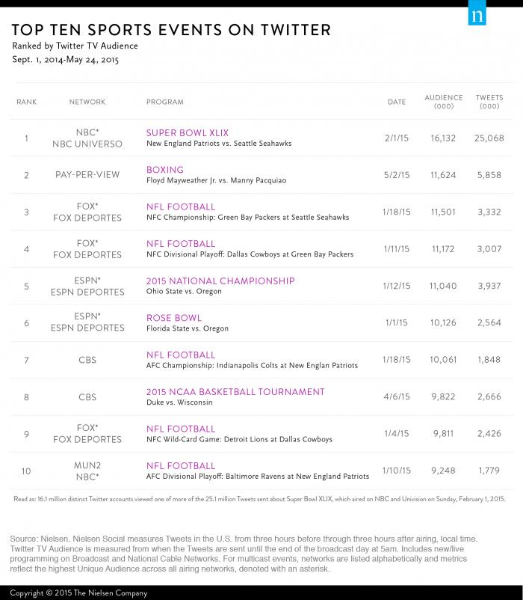 Methodology
Source: Nielsen. Data from 9/1/2014-5/24/2015. Nielsen Social measures Tweets in the U.S. from three hours before through three hours after airing, local time. Twitter TV Audience is measured from when Tweets are sent until the end of the broadcast day at 5am. Sports Events, Series, and Specials include those on broadcast and national cable networks only. Sports Events are across all day parts and are ranked by unique audience for each individual telecast. Series include new/live primetime and late fringe programming only. For multicast events, networks are listed alphabetically and metrics reflect the highest unique audience across all airing networks, denoted with an asterisk.