Take in the @NHL 2015 Stanley Cup Final on Twitter

Back in April, sixteen @NHL teams began their quest for a championship. Now just two remain, as the @NHLBlackhawks go head-to-head with the @TBLightning to see who takes home the #StanleyCup. Starting with Game 1 tonight, Twitter is your home to all the action on and off the ice.

Just before the playoffs began, you may recall that we accurately predicted three of four conference finalists (sorry @TBLightning; we owe you one!) and the @NHLBlackhawks as a #StanleyCup finalist. Here’s a look at our original predictions, which were based on Twitter mentions of each team three months prior to the playoffs beginning – and how we did on the road to the finals: 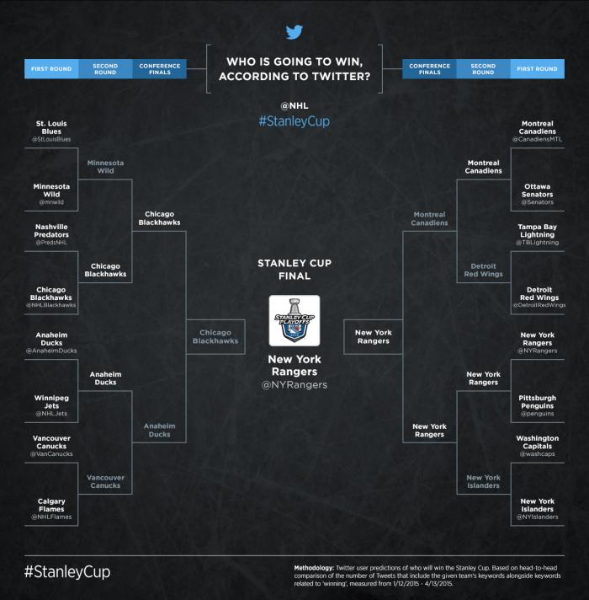 Now that the Stanley Cup Final is upon us, here’s your Twitter primer on top handles and hashtags to follow to upsize your #StanleyCup experience.

Follow @NHL for all things #StanleyCup from media day and exclusive previews to all the game action and highlights, plus post-Cup celebrations and championship parade.

This year marks our first Stanley Cup Finals Amplify program. Fans in Canada and the U.S. can follow @NHL for real-time highlights of the best moments of the Finals, presented by Scotia Bank (@ScotiaHockey).

The Chicago Blackhawks are looking to add their third #StanleyCup in the past six years. Here are your best bets for following the team and diving into the Twitter convo on their quest to bring home the hardware:

The Tampa Bay Lightning want to add a second #StanleyCup to their trophy case with the journey all taking place live on Twitter:

Which team is winning the Twitter conversation? This data visualization looks at mentions of both teams since the Conference Finals began (5/16/15). Check out the peaks when one of the teams won a big game: 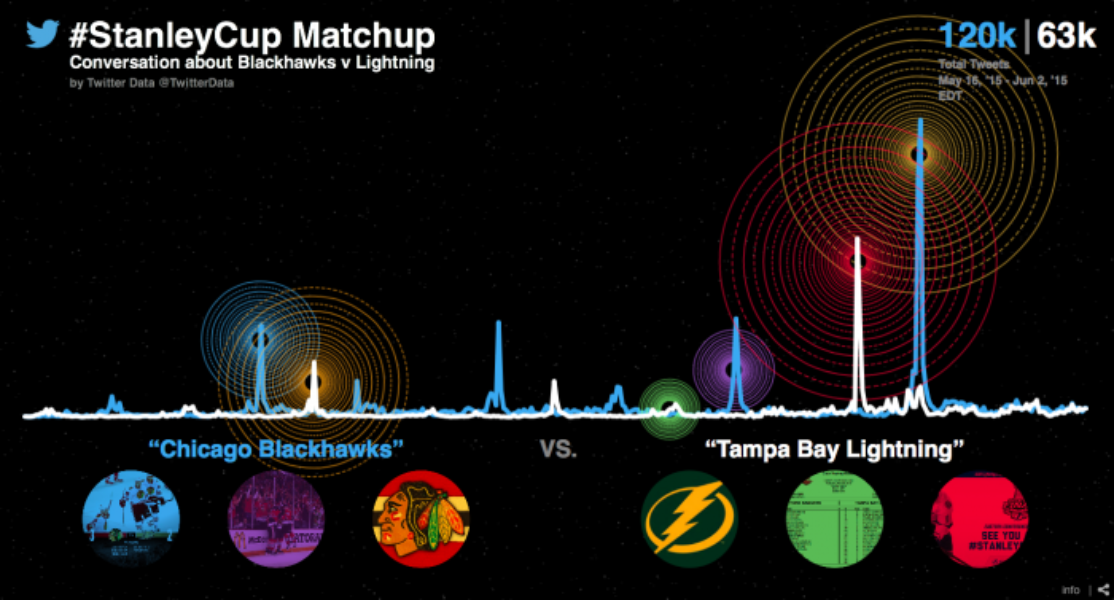 Click on the image to explore the interactive chart

The puck drops tonight! This is a reminder for fans in Canada to follow @Sportsnet for near-real-time video highlights of the biggest plays and a Stanley Cup “moments” contest.

@NHLonNBCSports is also the perfect companion for up-to-the-second news and content for U.S. hockey fans watching from home.