The new Premier League season gets underway tomorrow and fans will be joining the conversation on Twitter like never before.

To celebrate the opening weekend, fans will have a new way to show support for their club with the launch of special Twitter emojis.

Starting today, emojis will show up when any user Tweets using specific dedicated hashtags during the opening weekend. The feature will be live until midnight on Monday following MNF, but will return at various key moments throughout the season (such as #DeadlineDay and the final run-in).

Here’s how to join the conversation:

This GIF Tweeted from @PremierLeague shows an example of the emojis:

63% of all Premier League players are active on Twitter, and you can follow them all throughout the season.

Tottenham (@SpursOfficial) have 92% of their first team squad on the platform, making them the club with the highest percentage of players on Twitter. They are followed by Manchester City (@MCFC) who boast 75%, and then Spurs’ North London rivals Arsenal, who are at 73%. Leicester City (@LCFC) round off the top four with an impressive 70%.

When it comes to the most popular players on Twitter, @England and @ManUtd star @WayneRooney continues to lead way with his 11.7 million followers: 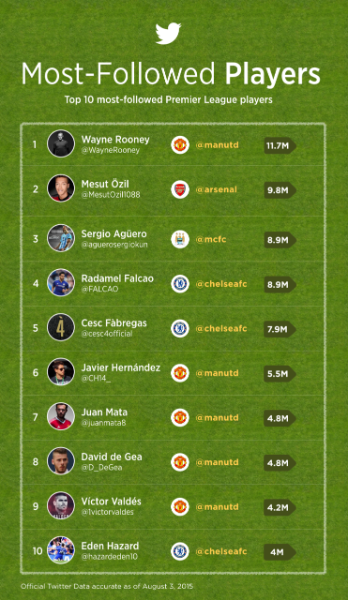 The battle to get points on the board will recommence on Saturday with big-spenders @ManUtd taking on @SpursOfficial. With nothing to separate positions in the table at this stage, we’ve ranked the 20 clubs based on their followers to give a unique early glance at the standings: 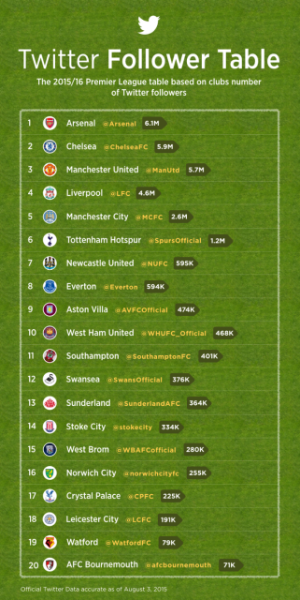 There is rarely any downtime in football and so it has proved over the summer, with all clubs getting involved in Sky Sports’ (@SkySportsNewsHQ) #92Live event, which visited every professional club on Tuesday, some by sending broadcaster @JimWhite over in a helicopter:

And pre-season tours were also a focus of great activity on Twitter, with @WayneRooney using the @TwitterMirror to thank @ManUtd’s fans for their support on their US tour.

@SpursOfficial took fans with them on their journey to Denver to play in the #MLSAllStar game:

Teams and players took to Twitter to break news of new signings:

In the tightest race for years, it is hard to predict whether reigning champions Chelsea will be celebrating again come May. What is certain is that there are plenty of twists and turns ahead and that fans will be experiencing the drama in real-time on Twitter from now until the final whistle in May.