From the combine in May to tonight’s #NBADraft, fans, current players and newest class of NBA rookies all relied on Twitter to follow the future of the NBA.

From the first pick to the last, the #NBADraft (@NBADraft) had Twitter buzzing throughout the night. Here were the most Tweeted about moments of the night.

Players spent the day anxiously anticipating the draft, using Twitter to give the world an inside glimpse of their big day.

But the real excitement began at Barclay’s Center (@barclayscenter), when NBA draft hopefuls filed in to watch their future unfold. Here are a few Twitter reactions from drafted players:

And current NBA players joined the convo as well:

A few draftees responded to current NBA stars, too:

Broadcast partner @ESPN also joined in on the action. In addition to their pick-by-pick reaction and analysis on Twitter, they also gave fans a history lesson, brought them closer to players and to a few upset fans at the draft.

In addition to the players themselves, the team and league accounts (@NBA, @NBADraft) shared moments from the big night.

Fans on Twitter got to see a few players speak to their new bosses:

And the top two teams made exclusive offers for fans to purchase their selection’s jersey on Twitter: 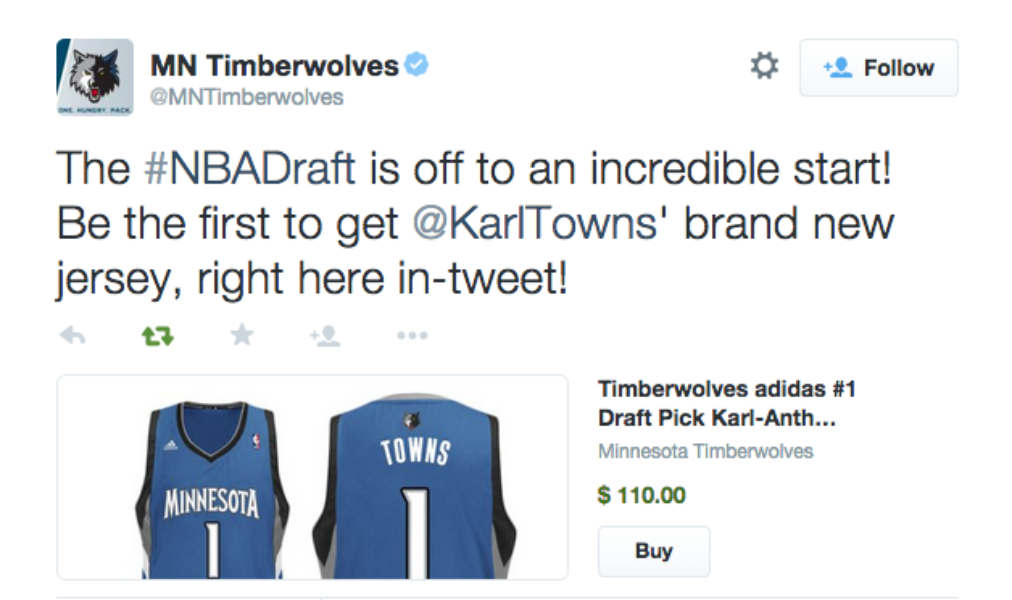 The road to the draft

The action didn’t start on Thursday night. For the past two months, the NBA draftees used Twitter to give fans an inside look to the preparation process — from declaration to draft night.

Meanwhile, @NBADraft kept fans in the loop during the big events, such as the NBA combine and draft lotteries in May.

Draft history
Current NBA greats turned to Twitter on the night they were drafted. Check out these Tweets from two recent #NBAFinals champs, back from their own draft nights in 2009 and 2012:

A few current all-stars Tweeted on their draft night as well:

Last year’s number one pick, @22wiggins, thought he’d be playing for the @cavs, while @JoelEmbiid was excited to join Philly:

For a complete look at the night on Twitter, check out this collection below featuring the most entertaining Tweets: