The @NBAAllStar game takes over New York and Twitter

As basketball’s biggest stars took to the court at both Barclays Center and Madison Square Garden, the @NBAAllStar weekend offered hoops fans the best way to stay close to all of the action and jump into the #NBAAllStarNYC conversation.

The weekend ended with the @NBA’s best players like game MVP Russell Westbrook (@russwest44), LeBron James (@KingJames) and Stephen Curry (@StephenCurry30) going toe to toe in the NBA All-Star Game at the Garden. And what a game it was, as the West beat the East 163-158 behind 41 points from Westbrook.

These were the top three most-Tweeted moments during the @NBAAllStar game:

Here were the most mentioned All-Stars on Twitter during the live telecast of the game.

Pau (@paugasol) and Marc Gasol (@marcgasol) became the first brothers in NBA history to start in the same All-Star game:

The @NBA debuted the KicksCam Friday night before the @bbvacompass Rising Stars Challenge, which captures Vines of player’s sneakers:

And of course the world’s greatest players brought fans closer to their sneaker game before Sunday’s All-Star Game:

Check out all of the KicksCam tweets in this collection:

The @NBA also made use of a Twitter Mirror, which has become a favorite among NBA fans for the biggest events, contests and game winners each night. Check out the winners of the first 3 events from Saturday night here:

For the rest of the Twitter Mirror shots, check out this collection:

To end the night, @MNTimberwolves rookie @ZachLeVine made a big splash winning the #SpriteSlam Dunk Contest:

His stellar performance earned the admiration of several NBA All-Stars in the crowd, including these three:

He also took to Twitter to thanks his fans afterwards:

TNT (@NBAonTNT) brought fans watching the festivities on TV closer to the action too. Former player and current analyst for “Inside the NBA” Kenny Smith (@TheJetOnTNT) hosted a Q&A on Friday:

During Saturday’s #SpriteSlam Dunk contest, TNT (@NBAonTNT) asked fans on air to provide names for each contestant’s dunks. After the dunk contest, fans voted on the best dunk name among the top four via @NBA: 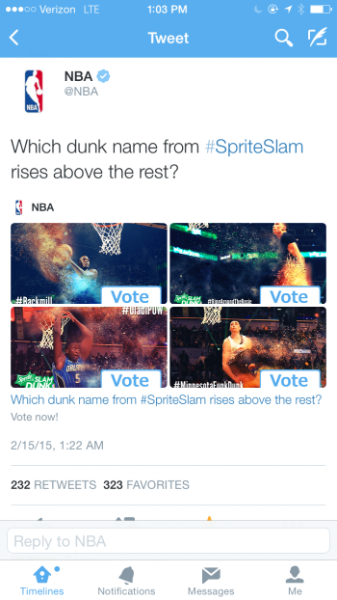 Prior to the All-Star Game on Sunday, former NBA great and current “Inside the NBA” analyst Shaquille O’Neal (@SHAQ) took over the @NBAonTNT account:

Fellow TNT analyst and former NBA star Reggie Miller got in on the action, too:

With help from State Farm Insurance, passionate NBA fans didn’t miss #NBARapidReplay highlights throughout the weekend, such as these below:

Thanks to Amex, the @NBA tweeted out these signature #NBAAllStar Moves:

Harman teamed up with the @NBA handle to Tweet out the #PlayOfTheNight:

And Samsung brought fans closer to Saturday Night’s #NBAStyle Fashion Show with these Tweets from @NBAonTNT:

Of course, Sunday’s game was the culmination of a great weekend. From Friday’s Rising Star and Celeb games to Saturday’s Shooting Stars, Skills Challenge, Three Point and Slam Dunk competitions, there was plenty to talk about before and during the big showdown. You can find Tweets from the entire weekend by star players, fans, celebrities, the @NBA and @NBAonTNT in this collection:

Be sure to follow @NBA, @NBAonTNT, @ESPNNBA, @Sportsnet and @TwitterSports to stay close to all of the hoops action throughout the rest of the regular season and playoffs.