The #NBAPlayoffs are set to tip off on Twitter

The road to the 2015 @NBA Finals begins tomorrow. As the top eight teams from each conference battle in a best-of-seven series on @ESPNNBA and @NBAonTNT, fans can count on Twitter for all the #NBAPlayoff action, on and off the court.

On Wednesday night, an eventful regular season ended in dramatic fashion with two teams sealing their fate. The New Orleans Pelicans (@pelicansnba) earned the final seed in the West with a big victory over the @spurs. The team and their players were excited to make the last spot:

In the East, a win on the final night of the regular season secured the Brooklyn Nets (@brooklynnets) a playoff berth:

With the contender field set at last, here’s your go-to guide for following the #NBAPlayoffs playoffs on Twitter.

For everything from in-game video highlights to exclusive player access, look no further than @NBA on Twitter during the playoffs. You can follow the official league conversation by using #NBAPlayoffs.

The NBA will also showcase highlights all playoffs long. Sony Playstation (@Playstation) has teamed up with the NBA to provide users with the “Play of the Game” throughout the Playoffs and Finals. Be on the lookout for these top highlights from @NBA all postseason long!

State Farm (@StateFarm) and the NBA are at it again as well. This postseason, State Farm is “assisting” NBA fans by spotlighting the #AssistOfTheNight. Check out the best assists of the 2015 Playoffs and Finals from @NBA, presented by State Farm.

Beyond the @NBA, you can follow your favorite squads for team-specific updates. All @NBA teams can be found here, with each one providing live game updates and analysis.

Which playoff players had fans buzzing the most on Twitter? The graphic below features the top three most-mentioned Western and Eastern Conference playoff players over the period January 16-April 15. 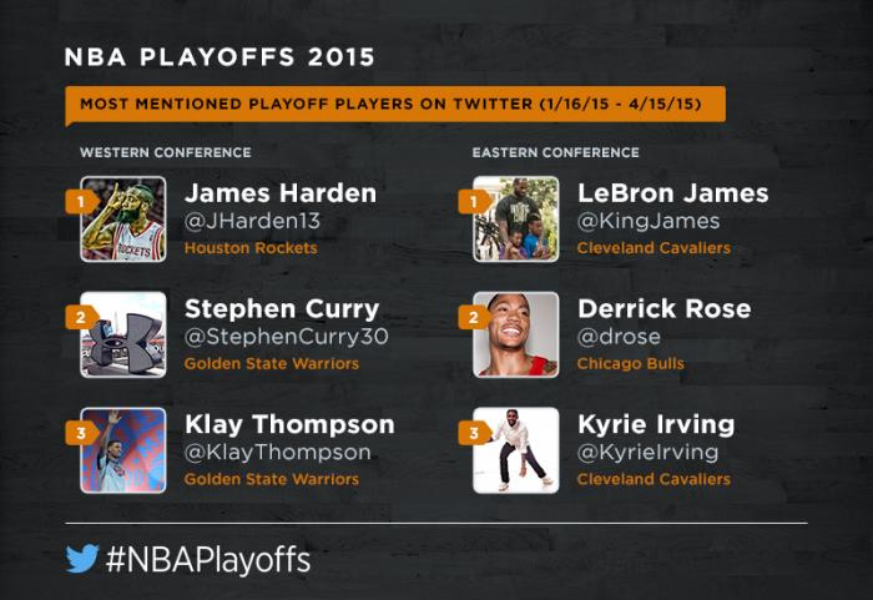 The official broadcasters of the playoffs have big plans of their own, from Saturday’s tip-off until the final game of the Conference Finals.

As usual, @ESPNNBA will treat fans to playoff-specific stats, information and trivia throughout the #NBAPlayoffs.

Meanwhile, @NBAonTNT will launch their #HeroBall campaign on Twitter, celebrating the team-centric brand of basketball required to succeed during the #NBAPlayoffs.

In addition to that campaign, fans can count on @NBAonTNT and @NBATV for around-the-clock coverage of every Playoff team.

Over the past three months, we were curious which teams Twitter users predicted would take home the coveted Larry O’Brien Championship Trophy. Rather than looking at which team simply generated the most overall conversation, we specifically measured which teams were talked about in the context of winning. So we analyzed how many Tweets used a team-related keyword alongside a ‘winning’ related keyword from Jan. 16 to April 15, then proceeded head-to-head style to arrive at who fans on Twitter think will win each series and take home the championship. The image below shows that Twitter fans have the @cavs beating the @warriors for the title: 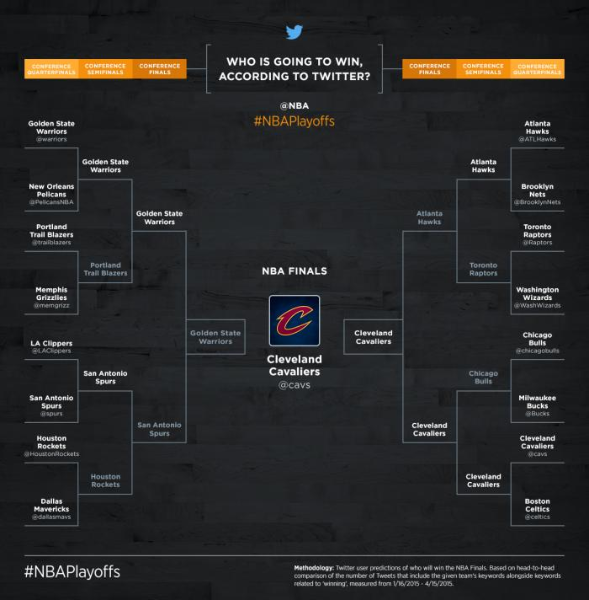