The #NFL divisional playoff weekend on Twitter featured a high volume of conversation around the instant classics in New England and Green Bay, the convincing victory by the defending champion @Seahawks and the @Colts big upset in Denver.

The most-Tweeted-about game from the divisional playoff weekend was the @packers 26-21 win over the @dallascowboys. Green Bay QB Aaron Rodgers (@AaronRodgers12) battled through a calf injury to throw for 317 yards and three touchdowns in the victory.

The Packers struck first when Rodgers found tight end Andrew Quarles for a four-yard TD with 8:30 left in the first quarter.

Tony Romo and the Cowboys marched back on the next drive and tied it up at 7 when fullback Tyler Clutts (@TylerClutts44) caught his first TD of the season. Dallas then took a 14-7 lead on a 38-yard TD pass from Romo to Terrance Williams (@TerranceWill2).

After Green Bay connected on a pair field goals, Dallas answered with a long drive that ended with a DeMarco Murray (@DeMarcoMurray) one-yard TD run to put the Cowboys up 21-13 with 4:12 left in the third quarter.

Green Bay answered with a 46-yard Rodgers TD pass to rookie WR Davante Adams (@tae15adams) on a third down and 15 with under two minutes left in the third quarter to cut the Dallas lead to 21-20. The Packers took a 26-21 lead after Rodgers found rookie tight end Richard Rodgers for a TD with 9:10 left in the game.

But Dallas stormed back on the next drive and thought they were close to scoring but a big-time catch by Dez Bryant (@DezBryant) was overturned on replay. And the play was the talk of Twitter.

NFL VP of officiating Dean Blandino and @FOXSports rules analyst Mike Pereira confirmed the call was the right one.

The @Lions felt the Cowboys’ pain:

Despite the rule, many felt the call was pretty controversial:

Bryant shared his feelings on Twitter after the game:

The Packers went on to convert two big third downs en route to winding the clock down for the victory. The Packers will travel to Seattle to play the @Seahawks in the NFC Championship next week.

The Cowboys and players also thanked fans for a great season.

Another thriller played out on Saturday night when the New England @Patriots defeated the Baltimore @Ravens 35-31. New England overcame two deficits of 14 points to reach their fourth consecutive AFC Championship.

The @Ravens got off to an early 14-0 lead thanks to two long drives that ended in Joe Flacco (@TeamFlacco) TD passes.

But Tom Brady and the @Patriots came back to tie it up at 14 with 3:37 left in the first half. Check out Brady’s TD run and celebration after New England’s first score of the game:

The Ravens scored the next 14 to go up 28-14, but Brady and the @Patriots stormed back and tied it up at 28 on this amazing trick play that saw wide receiver Julian Edelman (@JulianEdelman11) throw a perfect 51-yard TD pass to Danny Amendola (@DannyAmendola).

Brady found Brandon Lafell (@Blafell1) for the winning score with 5:13 left in the game. Brady became the all-time @NFL leader in postseason passing TDs with 46 on the play.

The Ravens had a chance to take the lead but Patriots safety Duron Harmon (@dharm32) intercepted a Flacco pass in the end zone with just 1:39 left in the game.

The Pats will host the @Colts next Sunday in the AFC Championship.

The @Ravens thanked fans for a great season:

And so did some of their top players:

Andrew Luck and the @Colts came out with the only upset of the weekend, as Indy defeated Peyton Manning and the @Broncos 24-13.

The Broncos took a 7-0 lead on their first drive of the game when Peyton Manning connected with Demaryius Thomas (@DemaryiusT) on a one-yard TD pass.

Andrew Luck and the @Colts tied it up at 7 after a long drive that featured two passes of 20+ yards to T.Y. Hilton (@TYHilton13) and ended with a six-yard TD run by running back Daniel Herron (@BOOMHERRON1). Luck later found Dwayne Allen for a three-yard TD and a 14-7 lead. And Hakeem Nicks (@hakeemnicks) caught a 15-yard TD pass from Luck in the third quarter to give Indy a 21-10 lead.

Indy never lost the lead again en route to their 24-13 upset win in Denver. Colts players thanked their fans after the game:

Denver players also sent their appreciation to fans for a great season:

The underdog @Panthers traveled to the defending @SuperBowl champion Seattle @Seahawks and lost a tough battle 31-17.

Seattle got on the board first when QB Russell Wilson (@DangeRussWilson) found Doug Baldwin (@DougBaldwinJr) for a beauty of a 16-yard TD pass with 56 seconds left in the first quarter. And the Panthers tied it up at 7 when quarterback Cam Newton (@CameronNewton) found rookie WR Kelvin Benjamin (@kelvinbenjamin) for a seven-yard TD with under eight minutes left in the first half.

But Seattle answered right back with a 63-yard TD pass from Wilson to Jermaine Kearse (@chopchop_15).

While the Panthers cut Seattle’s lead to 14-10 at the half with a late field goal, Twitter was abuzz with the leaping ability of Kam Chancellor (@Kam_Chancellor) on the field goal block attempt.

Seattle running back Marshawn Lynch (@MoneyLynch) had another one of his staple #BeastMode runs in the third quarter.

A double Wilson connection helped put Seattle up 24-10 with under 11 minutes left in the game when Luke Willson (@LWillson_82) caught and ran for a 25-yard TD.

And who else but @Kam_Chancellor helped put the game away when he intercepted a Cam Newton pass and returned it 89 yards for a TD with just under six minutes left in the game.

Players from the winning team thanked teammates and fans after the game:

As did head coach Pete Carroll:

Some @Panthers thanked their fans as well after a tough end to the season:

The playoffs also are a time when teams make decisions on their coaches. The @buffalobills hired former @NYJets coach Rex Ryan as their new coach and announced it on Twitter Sunday night:

And just a day after a tough playoff exit, the @Broncos and head coach John Fox decided to part ways.

Here are the top five most-mentioned team accounts on Twitter during the Divisional Playoff weekend (Saturday, Jan. 10 to Sunday, Jan. 11):

Click on the image below to explore this data visualization that features the most-mentioned players and teams (and related Tweets) from the divisional playoff weekend. 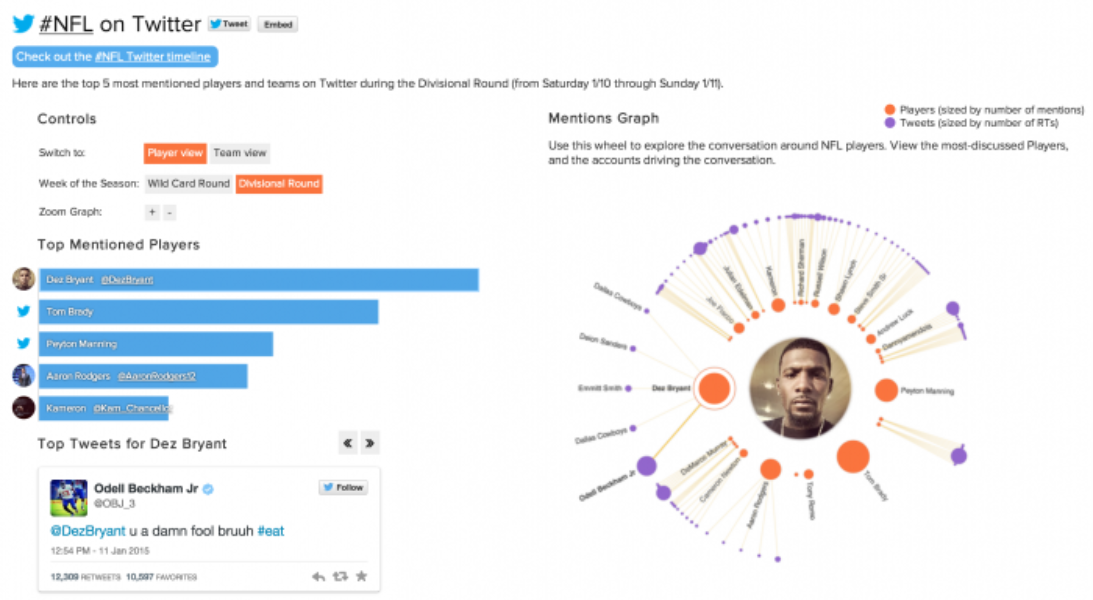 Here are the most-tweeted games during and around live telecasts from the divisional playoff weekend based on number of Tweets, as measured by Nielsen Social (@NielsenSocial).

Come back next Tuesday as we recap how the #NFL Conference Championships played out on Twitter.