The #NFL Wild Card playoff weekend on Twitter featured big plays, a flagging controversy and an upset in Pittsburgh. It also saw many people come together to share memories and mourn the passing of broadcasting legend Stuart Scott.

On Sunday morning, news broke that legendary @ESPN broadcaster Stuart Scott had passed away at the age of 49 after a long battle with cancer. ESPN Tweeted a tribute to Scott, and numerous NFL players sent their condolences on Twitter.

The most-viewed and Tweeted-about game from Wild Card weekend was the controversial @dallascowboys 24-20 victory over the @Lions.

The game got off to a quick start when Detroit QB Matthew Stafford connected with WR Golden Tate (@ShowtimeTate) on 51-yard TD on the first drive.

But thanks to great defensive play from both teams, Dallas pulled out the close win and football fans discussed the top moments on Twitter, including the controversial no call and a double fumble.

A Tony Romo TD pass to Terrance Williams (@TerranceWill2) with 2:32 left in the fourth quarter was the game-winner for the @dallascowboys.

As did some well-known fans:

Detroit players sent messages to fans on Twitter after the game as well:

Dallas will travel on Sunday to Lambeau Field to take on Aaron Rodgers (@AaronRodgers12) and the Green Bay @packers.

In the other NFC matchup, the @AZCardinals traveled to the @Panthers and lost 27-16. Carolina was led by the relentless play of quarterback Cam Newton (@CameronNewton), running back Jonathan Stewart (@JonathanStewar1) and a dominating defense captained by linebacker Luke Kuechly (@LukeKuechly).

In the game, seldom used running back Fozzy Whittaker (@FozzyWhitt) had a big 39-yard TD catch for the @Panthers.

Carolina stars thanked their fans and look forward to facing off against the @Seahawks next week in Seattle.

Arizona was gracious in defeat:

On Monday morning, the NFL community showed support for Panthers head coach Ron Rivera and his family when news broke that their house caught on fire. But the coach confirmed his family was safe and his next adversary sent well wishes.

Speaking of the @Seahawks, the team is certainly ready to host the @Panthers on Saturday.

AFC North rivals faced off on Saturday night in Pittsburgh, but the @Ravens proved to be too much for the home team @Steelers. Thanks to a another big playoff performance from QB Joe Flacco (@TeamFlacco) and a stout defense, Baltimore won 30-17.

Check out the play of the game: an interception by Terrell Suggs (@untouchablejay4), caught with his knees!

The @Steelers missed the production of injured star RB Le’Veon Bell (@L_Bell26), who thanked fans for a great season.

A few of Bell’s teammates were thankful as well:

The @Ravens will travel to play the @Patriots on Saturday.

On Sunday, Andrew Luck and the @Colts easily handled the @Bengals 26-10. Luck, T.Y. Hilton (@TYHilton13) and running back Daniel Herron led the way for Indy.

As were players on the losing team:

@RichEisen paid tribute to his friend and former colleague, Stuart Scott, by using his signature catch phrases to recap #CINvsIND:

The @Colts will travel to Denver on Sunday for a big showdown against former Indy QB Peyton Manning and the @Broncos.

Click on the image below to explore this data visualization that features the most-mentioned players and teams (and related Tweets) from Wild Card weekend. 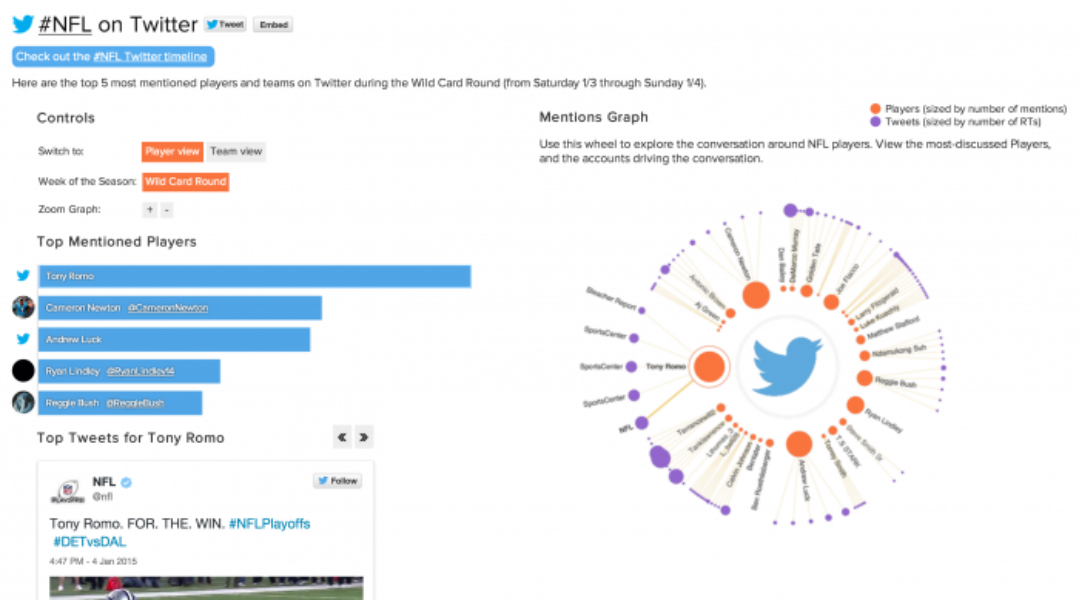 Here are the most-tweeted games during and around live telecasts from Wild Card weekend based on number of Tweets, as measured by Nielsen Social (@NielsenSocial).

And here are the moments that sparked the top Tweets per minute (TPM) peaks during live televised games, as measured by Nielsen Social (@NielsenSocial). The top five Tweeted moments all came during the @Lions vs. @dallascowboys game.

This was the the most-Tweeted moment from the @AZCardinals vs. @Panthers game:

This was the most-Tweeted moment from the @Ravens vs. @Steelers game:

And this moment was the most-Tweeted from the @Bengals vs. @Colts game:

Come back next Tuesday as we recap how the #NFL Divisional playoffs played out on Twitter.