The Pulitzer Prizes have honored journalists, photographers, writers and artists for 99 years, but this year was different. This was the first time the prestigious awards were revealed simultaneously on Twitter.

“The Pulitzer Prizes have been administered at Columbia University for 99 years, but we wanted to do something new and special that shows the world we’re looking ahead to the next 100,” says William McGuinness, social and digital media manager for Columbia, adding that the Pulitzer Prizes organization also joined Twitter to gear up for its 2016 centennial.

When the ceremony began on April 20, @PulitzerPrize live-Tweeted the winners as they were announced. The account encouraged readers to follow along using the hashtag #Pulitzer. The Pulitzer team displayed graphics and photos of the winners, and Tweeted out behind-the-scenes Pulitzer facts such as the number of jurors appointed and submissions received.

“Our Twitter strategy was to announce the awards very simply and immediately act as a seismometer, showing how news of the winners’ travels, how [the news] is received, what a Pulitzer means to people who win,” said McGuinness. “Retweeting was more important than creating new content because we wanted to keep the focus on the prize winners and their important work.”

Winners in the journalism category included news organizations such as the Post and Courier of Charleston, S.C., The Wall Street Journal, the St. Louis Post-Dispatch and the Seattle Times. @PulitzerPrize Retweeted reactions from news staffers as they learned they were to be honored.

News organizations and journalists also made use of Periscope, our new live-streaming video app, to record live reactions to the news.

The New York Times’ video team (@nytvideo) captured remarks from its three Pulitzer winners on the newsroom stairway as they shared candid observations about the stories they cover. 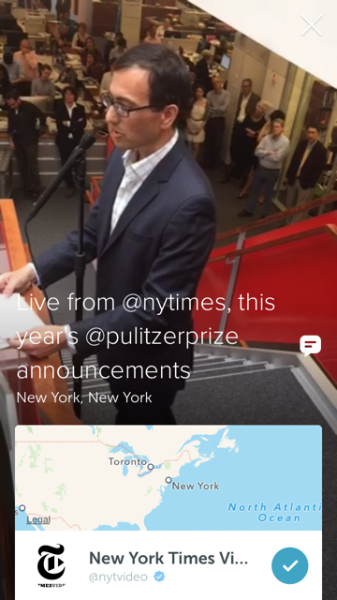 “We had been looking for the right opportunity to use Periscope, and we thought this was the perfect opportunity to try out the platform … while giving our readers a unique behind-the-scenes peek at our newsroom and journalists,” said Deborah Acosta, the Times’ social video editor.