The most prestigious tennis tournament in the world begins on Monday and Twitter is the place to see all the @Wimbledon action, on and off the grass courts, unfold:

Periscope is playing a key part in building the anticipation ahead of #Wimbledon. At 1400 BST on Friday 26 June, seven-time champion Roger Federer (@rogerfederer) will conduct an exclusive tour of the grounds with Wimbledon CEO Richard Lewis:

And defending ladies champion Petra Kvitova (@Petra_Kvitova) will broadcast on Periscope her walk from the locker room to the practice courts, once the tournament is underway next week.

Vine will also be at the heart of @Wimbledon’s social story in 2015, with clips from yesteryear contributing to the countdown, including this one:

A group of the UK’s best known Viners — Daz Black, Ben Phillips, Arron Crascall, Stuggy, Leslie Wai and Huw Samuel — will descend on The All England Club on opening Monday to chronicle their adventures lining up for tickets in the legendary Wimbledon queue (#TheQueue), watching tennis and sampling strawberries in the afternoon.

Gwri Pennar (@GooRee) will be documenting the tournament in a light-hearted 14-part series of six-second Vines to be published daily from @Wimbledon.

The Twitter Mirror will be doing the rounds at SW19, conducting an exclusive photoshoot with the world’s best players over the weekend, including @Andy_Murray, @RogerFederer, @DjokerNole, @RafaelNadal, @SerenaWilliams and @MariaSharapova.

It was also on hand to capture the best of the social build-up to Wimbledon 2015.

On Thursday evening, five-times champion @SerenaWilliams and last year’s finalist @geniebouchard were among a host of stars to use it at the WTA party:

While Ralph Lauren captured a host of glamorous photos at their Wimbledon party at Kensington Palace, while players also Tweeted straight from the courts:

For attending spectators in 2015, the Wimbledon experience on Twitter starts long before they walk through the gates.

They will have a chance to pose for pictures alongside a giant topiary @Wimbledon sign, while waiting to enter the famous grounds: 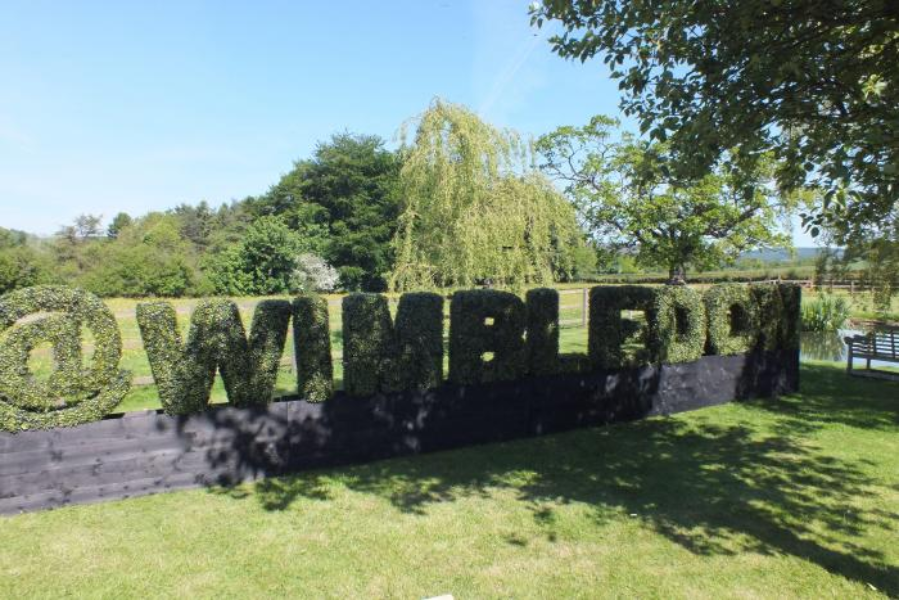 And #TheQueue will be home to a brand-new Twitter voting activity, encouraging fans to predict their winners in the big matches of the day.

Once inside, the voting experience continues at Henman Hill, where fans watching the tennis on the big screen will have the opportunity to give their opinion on a range of daily topics, using #TheHill (or #TheWorld if they are participating from outside The All England Club).

For the first time, fans will also be able to send selfies that could be featured on the big screen, using #TheHill, for their big moment in the sun (or rain).

The voting is already under way, with @Wimbledon polling tennis fans on who they think will win the men’s singles this year:

Whoever you are supporting, Twitter is the place to follow your favorite players, as more than 95% of the men’s and women’s seeds are on Twitter. You can find them all here.

To celebrate the most social Wimbledon ever, Twitter has introduced new emoji for fans and they were launched by @SerenaWilliams.

By Tweeting with #Wimbledon, fans can trigger a small tennis racquet symbol in their Tweet. What’s more, as a special treat, the emoji associated with #Wimbledon will change throughout the tournament, so keep Tweeting to see what’s next.

Other featured emoji include iconic Wimbledon trademarks such as as #TheQueue and #TheHill. Fans who aren’t lucky enough to visit SW19 can also get involved using #TheWorld emoji — creating a friendly battle of conversation between those fans on Henman Hill and those around the world.

Wherever you choose to watch, enjoy #Wimbledon and turn to Twitter to join the global viewing party.