This #FridayForGood connected 30 Twitter offices across the world around some 100 projects, making it a truly global day of service. Here’s a look at a few of our volunteer efforts from all over.

Australia
@TwitterAU partnered with House With No Steps (@HWNS), which for the past 50 years, has provided support and services for people with disabilities in order to achieve their goals, whether it’s finding a job, a place to call home, or making new friends.

Canada
Our @TwitterCanada team helped package hundreds of beautiful handmade Rafiki necklaces for Free the Children (@freethechildren) as part of their fundraising effort for this holiday season. Volunteers then spent time with members of the organization for a social media “deep dive” – talking about how Twitter can be used to showcase the group’s amazing work. Many members of the Twitter Canada team scheduled follow-up meetings to stay involved beyond our #FridayForGood visit.

The France team also volunteered their time and expertise by training members of @petitsprinces about using Twitter to mobilize supporters for its charitable efforts to help realize the dreams of sick children.

Germany
Both the @TwitterDE Berlin and Hamburg teams were in Hamburg for the day, and volunteered with Refugees Welcome Karoviertel. This is a self-organized initiative in which people are assisting refugees as they arrive in Germany. Help is needed most right now with intake at the donations center, and we assisted with packing, unpacking, sorting, organising, and inputting all contributions into the larger sorting system. Here’s a Twitter collection from the day.

India
Our @TwitterIndia teams spent the day supporting the @blindrelief, @NAB_Mumbai, and @rakum Blind Associations to raise awareness for a disability that affects almost 15 million Indians – the largest blind population in the world. In Delhi, Mumbai, and Bangalore, our employees made candles (which are sold for fundraising) and Diwali garlands, spoke to students about career possibilities, and served special meals to the children.

Indonesia
For our first ever #FridayForGood in Indonesia, @TwitterID teamed up with @RumahHarapanVCF (translation: “a home of hope”), a temporary shelter home for children with serious illnesses. Our volunteers collected children’s books via the hashtag #1Book1Hope, and spent time playing with the kids and listening to their stories.

Ireland
With participation at record levels this time, our @TwitterDublin office broke new ground: a total of 140 Dublin employees lent a helping hand across several projects. And #FridayForGood even trended in Ireland!

The cyclists in our midst raised almost 1,500 Euros for GOAL, an Irish international aid relief organisation with a particular focus on the Syrian refugee crisis.

Two employee-run workshops on how to campaign on Twitter welcomed over 60 representatives from Irish NGOs, Older Voices Online (@OlderVoices), and the An Cosán (@an_cosan) “Young Women into Technology” programme.

Among other volunteer efforts in Dublin was a workday shadow program in partnership with Junior Achievement (@JA_Irl), a coding session with students from @CoderDojo schools across the city, and a blood drive at a local clinic.

Italy
@TwitterItalia volunteers spent time with 15 boys from the Fratelli di San Francesco homeless shelter for immigrant teenagers who have no family; the group visited the Natural Science Museum.

Netherlands
We (@TwitterNL) partnered with the Dutch Red Cross on projects geared to refugees coming to the Netherlands. Some of us went to the Red Cross HQ in The Hague to help their marketing communications team set up Twitter campaigns supported by our Ads for Good program. Another group went to a Red Cross distribution center to collect, organize and package clothes that will be send to refugee centers around Amsterdam.

Meanwhile, two of our colleagues went to the Red Cross refugee center in South-East Amsterdam, where they distributed food, secured the ‘welcome stores’ and otherwise made themselves useful.

Singapore
Over 50 members of @TwitterSG lent a hand to various #FridayForGood efforts here, including #Create4Good. This was an event where we helped 20+ NGOs learn how to use Twitter to build compelling campaigns for their causes. Our Singapore team also launched a #BetterInternet Ambassadors Program, which uses the power of influencers to amplify NGO voices promoting Internet safety and responsible digital citizenship.

Spain
The @TwitterSpain team led a Twitter strategy session for NGOs looking to maximize their use of the platform. Just ahead of #FridayForGood, our volunteers also participated in a crowdfunding effort with the Red Cross to support the needs of refugees entering Spain.

Japan
Teams from @TwitterJP volunteered across three #FridayForGood projects. At Hiroo Friends, people cleaned up weeds on the playground and footpaths surrounding the orphanage. After a study session on Cambodian children’s health led by NGO Share, we made bunny dolls that will be delivered to babies coming for medical check-ups in rural Cambodia. A third group partnered with “Machikado Clean Day” to pick up street trash near our offices.

Latin America
Our @TwitterLatAm volunteers in Bogotá, Colombia and Mexico City worked with @TechoCol and @TechoMx to build emergency homes in vulnerable communities.

In San Paulo our team began the day at A.C. Camargo Hospital (one of the world’s largest oncological treatment centers) for a blood donation drive. The blood received that day helped more than 40 children in treatment. We’ve also been collecting hygiene kits for these kids. Then we headed to Orpas, a social organization that helps underprivileged children and teens in Sao Paulo. Across Brazil every October, there’s a holiday known as “Children’s Day”. Our team donated and wrapped more than 470 toys for the kids, and prepared the facility for a special Children’s Day party the next day. Finally, we collected donations for Patinhas, a dog shelter in Sao Paulo.

UK
@TwitterUK welcomed Samaritans (@samaritans) and Internet Matters (@IM_org) to our offices to brainstorm creative ideas for making their forthcoming campaigns a success. Through Yes Futures (@YESfutures) and Access Aspiration (@accessplacement), UK volunteers also met with young women considering a career in technology. The women heard from a range of employees about what it’s like to work at Twitter, how to build up their skills, and how to stand out in the application process. Finally, Team London hosted a Twitter Q&A, with questions about how to get the most out of Twitter as a charity or non-profit organisation coming in from across the UK.

United States
@TwitterNYC was all over Manhattan. We worked on some awesome projects, including mentoring public high school students, park beautification, a backpack giveaway for 400 public school students, teaching teens how to be responsible on Twitter, and arts and crafts with young people.

@TwitterBoulder teamed up with Wish for Wheels to build and deliver 51 bikes to 51 kindergarteners and their families.

@TwitterLA partnered again with kids from Westminster Elementary in Venice with LA’sBest, an after-school enrichment program.

@TwitterSeattle volunteered with Seattle’s Children, Northwest Harvest and taught middle school girls about careers in STEM at their offices.

See more of our #FridayForGood memories from around the world here and in this Tweet collection. 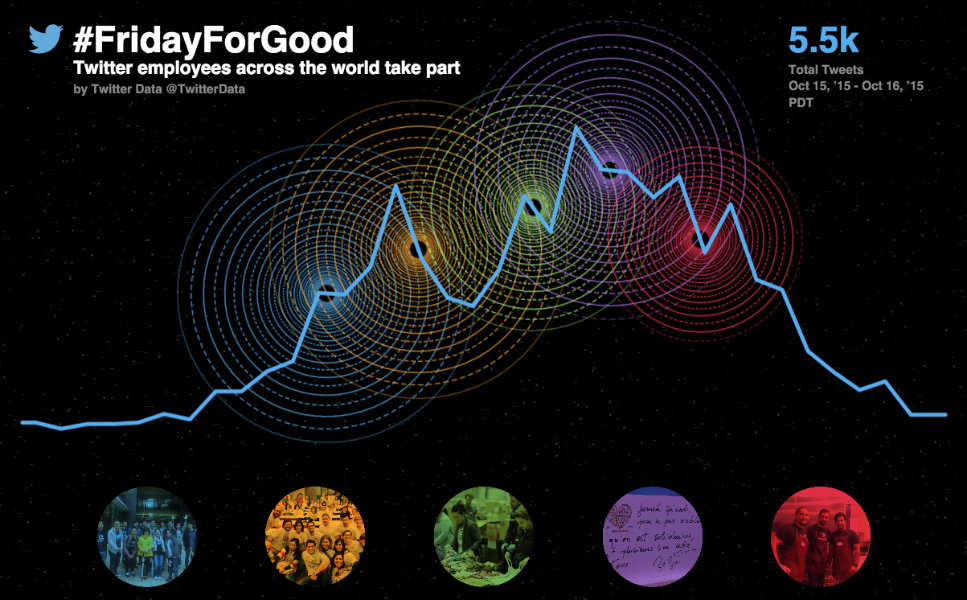 Learn more about our #FridayForGood projects in San Francisco.