The summary (in 140 characters or less)

Procter & Gamble’s Old Spice (@OldSpice) has been around for 75 years, “helping guys improve their mansmells with deodorant, antiperspirant and fragrances ” (their phrasing). But viral juggernaut they created in a 2010 ad campaign, “The Man Your Man Could Smell Like,” gave the brand the refresh it needed among a new generation of digital consumers. The effort also demonstrated a new gold standard of online creativity that drives social buzz and real business impact.

Wieden+Kennedy has been @OldSpice’s agency of record across TV, media and social since 2008.

“When the brand came to us, it was looked at as a product your grandfather would use,” says Michael Holz, Interactive Strategy Director. “P&G was looking to appeal to younger guys and moms alike. We breathed a more youthful feel into the brand and fundamentally changed how the brand spoke to the market. The beginning of that was ‘The Man Your Man Could Smell Like’ work.”

“Today, our core approach with @OldSpice continues to be about creating unexpected entertainment that people will want to share,” says Michael Holz, Interactive Strategy Director.

To launch its nature-inspired “Fresher Collection,” @OldSpice needed to tie its Tweets to the theme of nature in a unique way that engaged the target audience, men 18-24. The @WiedenKennedy team knew they had to go beyond just a cool video or quirky image and bring to life an experience that pushed the envelope.

“We wanted to experiment and use Twitter to reward existing fans while encouraging new ones to step into our world – which probably smells better than the one they’re used to,” says Holz.

The agency decided to align with the existing Twitter conversation around the hashtag #naturefacts. “It can be hard and time-consuming to start your own, so we decided to listen to what people were already talking about and try to connect it with our message,” explains Holz.

@WiedenKennedy created a custom interactive experience that let fans harness the awesome power of Mother Nature to create new (and even more awesome) animals. That’s how the Mating Game was born. 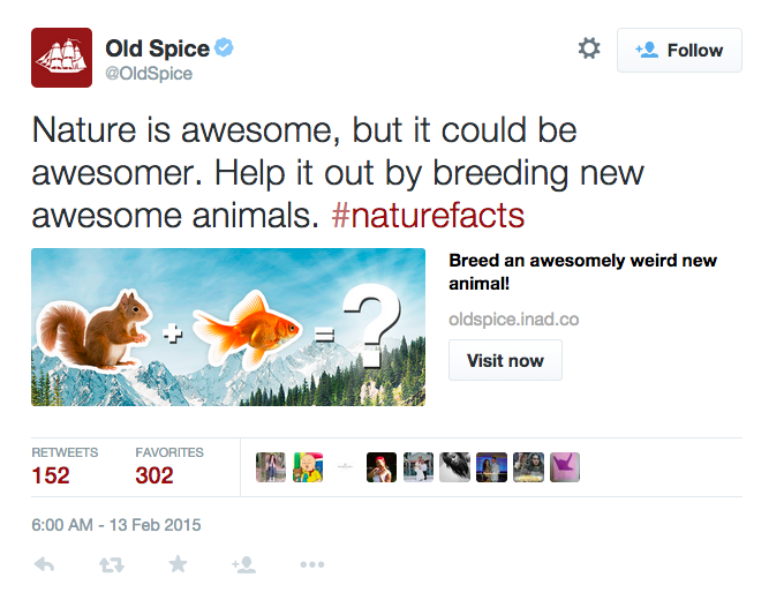 “We created a custom Website Card that displayed inside the Promoted Tweet itself and worked across mobile and desktop,” says Holz. “Our Animal+Animal+Power-up formula yielded 64 possible crazy animal-hybrid creations.”

It was a simple interface where you could choose one of four animals in each frame. But the experience offered so many different outcomes (and possible monstrosities) that fans couldn’t resist doing it over and over and over again.

All of the images, housed in a branded environment promoting the new collection, were easily sharable. Pre-populated Tweet copy to share also included the @OldSpice handle and the #naturefacts hashtag to continue developing the connection between the brand and nature.

“We saw it take off really quickly on Twitter. We were watching it around midnight, knowing it was a success and optimizing it in real time to drive that repeat usage, sharing and deeper engagement. The flexibility of Twitter’s targeting was key because we could see the performance and know we were connecting with the right guy with the right interests in the right moment,” says Holz.

The Mating Game proved to be addictive to Twitter users, spawning 50,000 website visitors and 3,000 Tweets. It also had a high completion rate of 95%.

“Twitter is open in a way that we are open as a brand. With #naturefacts, we were able to create something completely unique that was within the brand voice and resonated with our audience but was actually an ad,” says Holz. “It’s the best place as creatives to learn swiftly by paying attention to the response in real time. That helps fuel us and create more engaging, weird @OldSpice-y things.”

The @WiedenKennedy team promise more fun on Twitter in the coming months with its latest campaign.

“We really like the community on Twitter. Whenever we create something interesting, we can put it there and Twitter users will do with it what they will. They’ll make it their own and share with each other. It offers the ideal platform for our @OldSpice shenanigans,” says Holz.