“We have to continually be jumping off cliffs and developing our wings on the way down.” - Kurt Vonnegut

The @CoderDojo Coolest Projects Awards is the only event of its kind in the world. With over 500 entries this year, it showcased the talent of young coders and engineers from across Europe. The event’s success reflects the phenomenal growth of the organisation behind it. CoderDojo is a network of free coding clubs for kids, or “ninjas,” and it now has over 600 “Dojos” across more than 55 countries. Twitter is a longtime supporter and we were delighted to sponsor the Coolest Projects Awards, as well as provide volunteers and a judge for the day.

Some of these ninjas saw how Twitter can be used to improve people’s lives. Take Stephen Cushen (@cushenst), aged fourteen, from Dublin. With his project, @TimeforTown, Stephen wants to make it easier for travelling Twitter users to get in and out of town from their hotels. When a user sends a tweet to @TimeforTown using the hashtag #hoteltime and a hotel-specific code, they receive an automated response with details of the next bus or train departing their area. Stephen has already integrated the timetables for the London Underground, Dublin Bus, Irish Rail and the entire public transport system of the Netherlands. His next target? New York City’s subway, of course. For his hard work and creativity, Stephen placed second in the Evolution category. 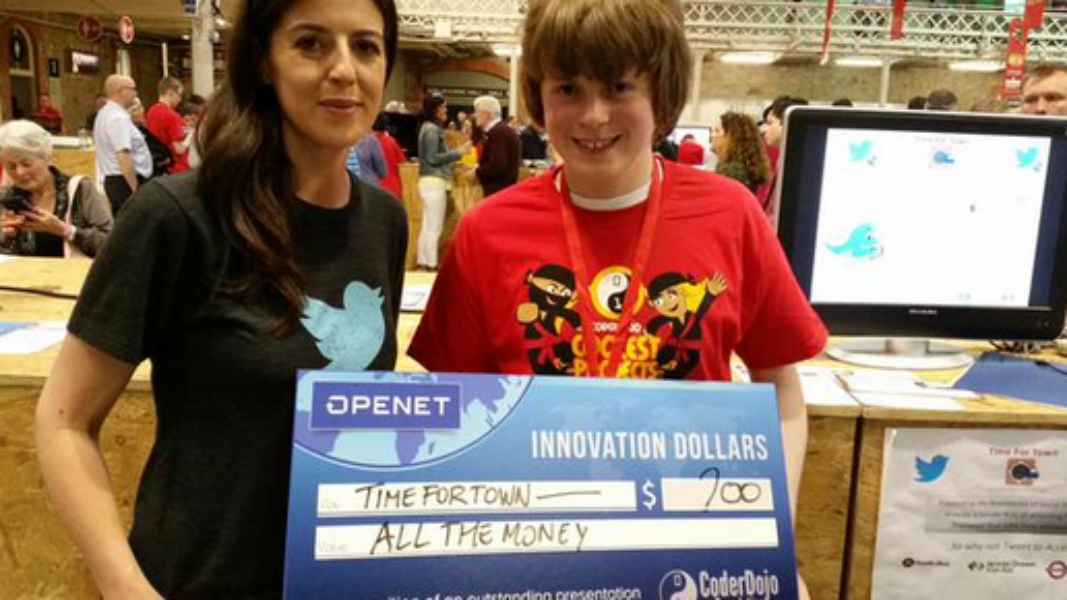 Twitter’s potential as a utility was also at the core of Aisling Gallagher’s project, @BirdsEyeView_. Thirteen-year-old Aisling had set up a bird box with a camera inside. When a user sent either a tweet or DM to @BirdsEyeView_, it would reply with a photo of the box’s interior. Not content with this simple demonstration, Aisling said it served to show how such a facility could be used for home security, baby monitoring and whatever else a user might think of. The Tullamore girl was already thinking how to scale the project and diversify the ways in which such an automated service could be directed to a broad range of home applications.

That both these projects were created with social value in mind was the rule, not the exception, at this year’s event. This generation is thinking of the future and how they might make it better by using technology in ways we haven’t thought of yet. They’re curious, creative and have the confidence to act on their ideas. Challenges are overcome and “it’s impossible” isn’t a phrase they understand.

Conor Begley’s project was an example of this boundless ambition. Conor’s aunt suffers from severe cerebral palsy which limits movement to her eyebrows. This makes communication extremely difficult. Conor, aged seventeen, wanted to give his aunt a memorable Christmas present while also making her life easier. So, he decided to invent, design and manufacture QuickCom. By linking sensors placed on his aunt’s eyebrows to a programme, Conor developed a way for her to quickly type what she wants to say. The programme is even loaded with stock phrases to save her having to type every sentence; “Come on Liverpool!” being a great example. Conor says his aunt’s use of QuickCom has allowed him to identify and improve on flaws in the project’s original design and he’s keen to bring it to other people who might need it. He’s thinking big, like so many of his peers.

Conor and the hundreds of kids who joined him in the RDS are why Twitter supports @CoderDojo. Their work is an antidote to cynicism and an exciting look at our future. With the Coolest Projects Awards, they’re getting the rockstar treatment they so richly deserve.