The FIFA Women’s World Cup (#FIFAWWC) has brought people across the world to Twitter to share every heart-pounding moment of the action on the field.

With the group stage now complete, we took a look back at how the tournament has unfolded so far on Twitter. Here are the metrics and insights that show it all stacks up – by team, player and goal.

The most buzz: the #USA vs #AUS match
Thanks to two goals by Megan Rapinoe (@mPinoe) and stellar goaltending by Hope Solo (@hopesolo), the June 8th match between the U.S. (@ussoccer_wnt) and Australia (@TheMatildas) drove the most Twitter conversation.

During the group stage, all eyes — rather, all Tweets — were on Team #USA, as their three matches drove the most Twitter conversation. And France’s two shutout victories and Japan’s win over Switzerland round up the top six. Based on the volume of Tweets, these were the top Tweeted matches of the group stage: 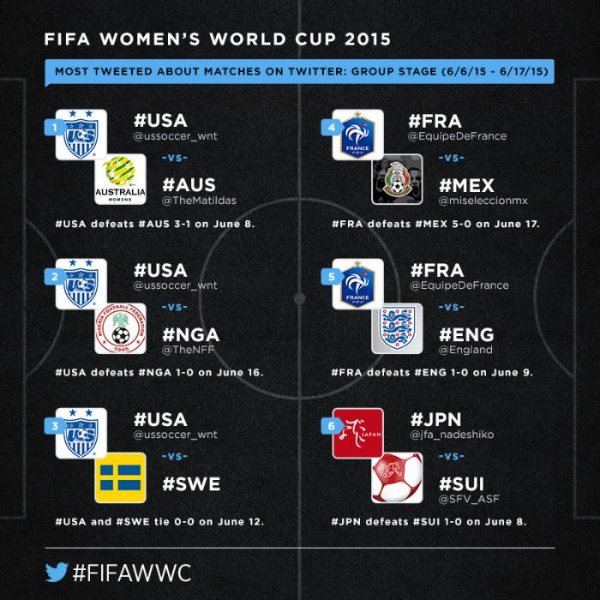 Most Tweeted moment: #USA’s Megan Rapinoe’s goal
All the thrilling action on the field was hotly discussed, but none more so than Megan Rapinoe’s (@mPinoe) second goal in the #USA vs #AUS match. Her goal, which put #USA ahead 3-1, generated the highest peak of Tweets per minute (TPM) during the group stage. Behind veterans like Rapinoe and Abby Wambach (@AbbyWambach) and an active fan base (not to mention a time zone friendly to the live matches), #USA won their group — and own the top six Tweeted moments of the #FIFAWWC thus far.

The six #FIFAWWC group stage moments that inspired the most fan conversation, as measured by TPM:

Most Twitter mentions: Team #USA and #AUS are leading the way
We looked at which teams generated the most Twitter conversation throughout the group stage, measuring mentions of a team as well as its individual players. While #USA owned many of the top matches and moments, they’re certainly not the only team with an active fanbase cheering on every match. Here are the standings of top teams through the group stage, based on Twitter conversation: 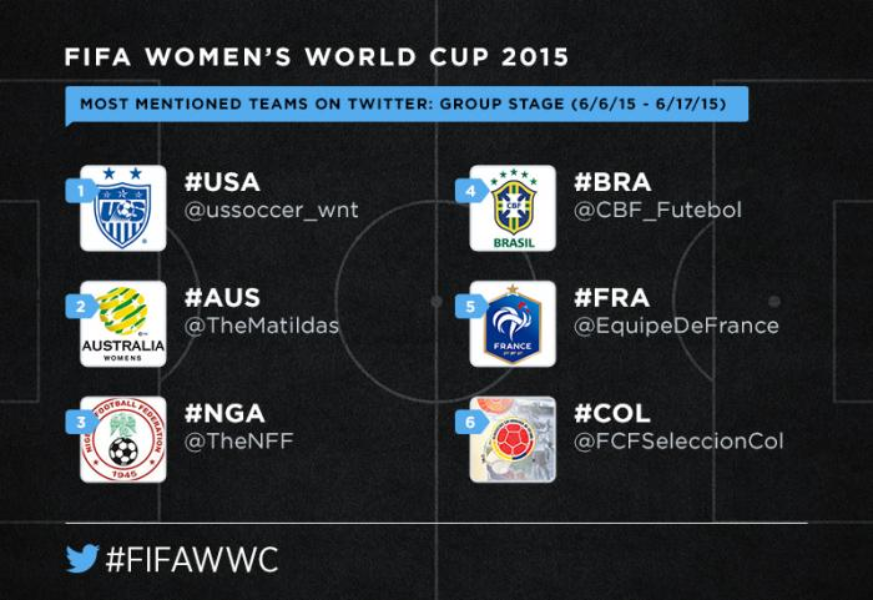 Most Tweeted-about players
Thanks to stellar play on the field as well as some personal news, Hope Solo (@hopesolo) was the most-discussed player during the group stage.

Solo is joined at the top of the standings by four #USA teammates and a star midfielder on Brazil. Here are the top players so far, based on Tweets mentioning them: 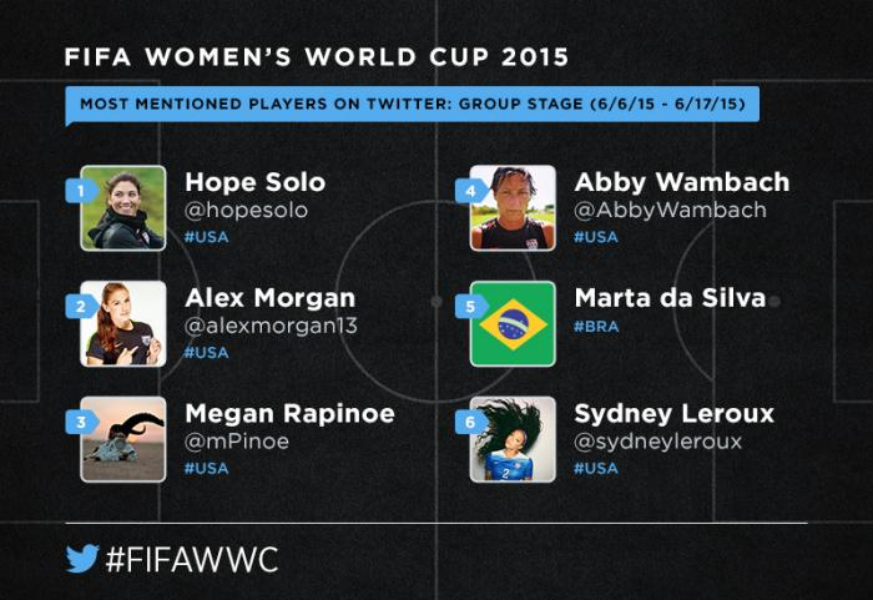 Whether discussing Solo’s thrilling saves or catching up on the highlights from #GER’s dramatic 10 goal victory, #FIFAWWC fans came to Twitter to be a part of the group stage action. All in all, this has lead to 2.7 billion impressions of Tweets about the Women’s World Cup thus far (6/6-6/17/15).

Next up: the knockout stage. Be sure to follow along on Twitter (read more here) as the action continues!