The very nature of Twitter — live, public, conversational, and distributed — has led to significant innovations in the way TV is both produced and consumed. Seeing hashtags on-air, enjoying Tweets from friends, family and celebrities while watching programs, and having exclusive access to show content makes Twitter the go-to companion to TV.

As our network partners roll out their offerings for the 2015-16 TV season, we thought it was a good time to review recent research on how media and marketing decision- makers can leverage the enormous opportunity TV x Twitter presents.

Twitter is predictive
Twitter is an invaluable resource for networks seeking to understand how audiences (on and off of Twitter) engage with shows. Nielsen research has demonstrated how networks can use Twitter as a tool for data-driven decision making:

Twitter users are TV’s cool kids
The savviest, most passionate and engaged TV fans gather on Twitter to enjoy their favorite shows. As heavy viewers, influencers and social second-screeners, Twitter users are TV’s tastemakers. As part of their TV influencers study, Ipsos MediaCT created this infographic that illustrates how these users influence what to watch, how to watch and where to watch:

Twitter makes TV ads more effective
The research is clear: Twitter leads to more commercial viewing, but Twitter users are also more positively affected by ads. Working with Millward Brown Digital, we conducted a study that found Twitter users had an average TV ad recall of 53% – versus 40% among viewers watching TV without a second screen. These viewers were also 13% more likely to discuss shows and 3% more likely to recommend programs, making TV x Twitter a win/win for advertisers and networks. 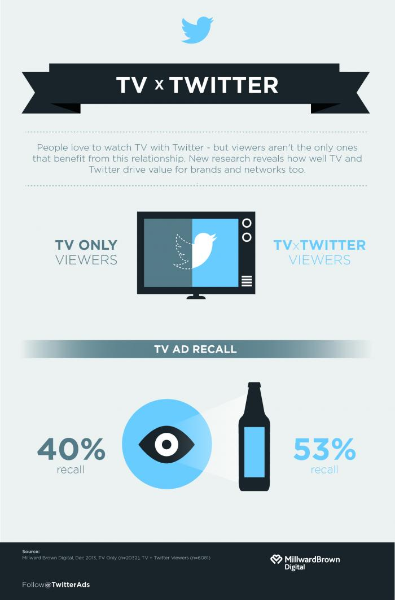 Twitter impressions drive results for media and brands
Beyond just making watching TV more fun, Tweets are highly influential and drive Twitter users and non-users to take action, online and offline. In partnership with FOX, the Advertising Research Foundation (ARF), and db5, we set out to understand the impact of seeing TV Tweets and brand Tweets. 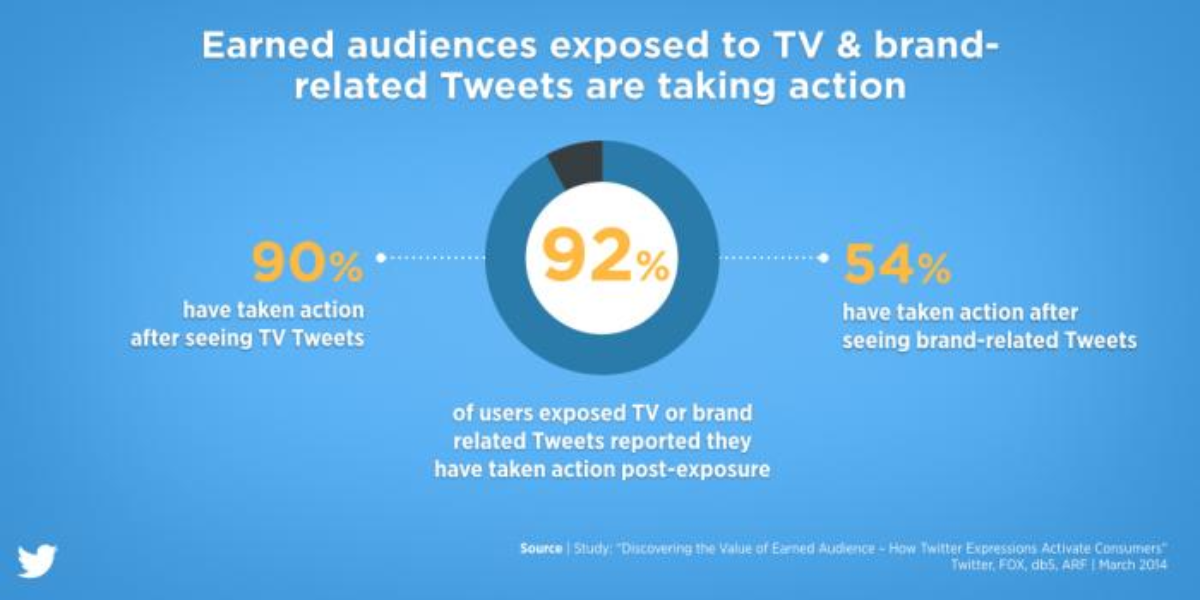 Twitter attracts millions of TV fans looking for a rich, interactive experience on what has become, in essence, the world’s largest living room couch. The TV x Twitter audience cohort is valuable in and of itself but also represents the TV population as a whole - offering a wealth of insights to brands and media partners alike.