Today is our 10th birthday, but it has always been the people and brands that have truly defined Twitter. Twitter is your place to listen, to create, to make a live connection to culture, to innovate. Thank you for your authenticity and speed. For making us laugh, and stop to think. For doing good, and bringing us all together. Today, of all days, we want to spotlight the myriad ways you have enriched the platform, and changed marketing and business forever.

Brands have always taken to Twitter to express themselves. With every Tweet, every response, and every cultural trend engaged, brands have shown their true voice in unique ways.

When Clayton Hove Tweeted that a bird had “crapped on a Smart Car” and “totaled it” in 2012, Smart Car USA swooped in with a hilarious graphic proving he must be mistaken. When Kit Kat threw down the gauntlet to Oreo and challenged them to a game of Tic-Tac-Toe, Oreo quickly responded, creating love for both brands. This type of brand interaction didn’t exist before.

Oreo continues to nurture its brand on Twitter, including through its most recent “Open Up” campaign. They consistently connect with people and culture to enhance their brand.

Oreo’s famous Tweet when the power went out during Super Bowl XLVII ushered in the age of real-time marketing. For the first time, a brand not only connected to culture, but did so in the moment, and at scale. It opened up new creative possibilities.

Brands quickly learned how to prepare for the unexpected. Take Snickers’ response to Luis Suarez’s infamous bite during the 2014 World Cup. They also started applying real-time marketing principles to their campaigns and everyday consumer behavior.

When Disney launched “Star Wars: The Force Awakens” last year, they engaged their audiences in a live, interactive story that started months before the release. Disney debuted its first TV spot on Twitter, ran live Q&A’s with the cast, and sparked excitement with a series of custom emojis for fans to discover.

“Real-time marketing is more important than ever. And that’s because we live in a world dominated by consumers expecting instant gratification and value-added services across all aspects of their lives — it’s what we call “the new fluidity”. In addition, people consume more media and get it in more places than ever before, making it harder for marketers to capture their attention. To be successful as a company in this environment, we need to embrace this fluidity: always be “on” and connecting with our fans with great content.” Dana Anderson, SVP and Chief Marketing Officer at Mondelēz International.

Thank you for creating a live connection to culture.

From #BlackLivesMatter to #HeForShe, the communities and movements that spring up organically on Twitter continually astound us. 140 characters and a hashtag can galvanize people and drive positive change.

Brands are also driving movements for social good. Rather than just connecting to culture, they are creating and sustaining it.

“In this complex world people are looking for something to engage with that really matters to them. They don’t just want a brand to buy anymore, they want an idea to buy into, a movement to join and get behind — whether that’s Dove raising the self-esteem of women all around to world, or Ben & Jerry’s marching alongside thousands of others against Climate Change. The connectivity and immediacy of Twitter and social media has given people the voice and the power to demand better solutions from governments, business, brands — and each other.” Keith Weed, Chief Marketing and Communications Officer, Unilever

Thank you for creating movements for social good.

Influencer marketing is as old as marketing itself and celebrity collaborations and endorsements have been a part of Twitter from the start. More recently, however, we have seen the rise of a new breed of influencer: the digital creator. Brands have played an integral role in working with these creators, pioneering new forms of creativity, and building a highly authentic connection with their audiences.

GE’s #6SecondScience Vines blazed a trail, showing us what was possible in only six seconds, and bringing us new stars like Meagan Cignoli. Visa gave us a unique perspective on the Sochi 2014 Winter Olympic Games with their Vine series from Ian Padgham. Comcast recently partnered with Zach King.

Last year, HP partnered with Niche, a Twitter company, to harness the power of digital creators, and launch its new Epic campaign. Creators such as Robby Ayala didn’t just share the Vines with their audiences, they became HP’s new TV spot.

“The future of digital creativity will be visual storytelling: the ability to tell stories with pictures and videos of any length, and few or no words. New creators are key to helping us tell these stories, and in making deep connections with our customers. The journey towards one to one communication will continue and ‘immediacy’ of response to cultural moments will be more important than ever.” Antonio Lucio, Chief Marketing and Communications Officer, HP

Thank you for introducing a new wave of creativity and making a more authentic connection to audiences.

Brands have always shared content at scale on Twitter, but they have also captured the open nature of the platform to listen and respond in personal ways. In a public forum, any conversation between a customer and brand has the potential to reach a mass audience.

For many years, Purina has engaged in personalized content at scale, responding to pet lovers in custom ways. During the Westminster Kennel Club Dog Show, Purina surprised and delighted TV viewers, Tweeting personalized messages, and putting their audience at the center of the conversation.

Thank you for listening, anticipating, and making it personal.

6) From the second screen to the first screen

TV and Twitter have long enjoyed a symbiotic relationship, and brands wasted no time innovating with the two screens. With its 2012 #YOUDRIVE campaign, Mercedes didn’t just stimulate second screen conversation, they enabled Twitter users to choose what would happen next, and ‘drive’ the commercial.

But alongside a shift to mobile as the second screen, the last 10 years have witnessed an even bigger shift to mobile as the first screen. Advertisers are increasingly breaking and sharing key messages on mobile first. In 2015, McDonald’s turned to Twitter to launch its new #AllDayBreakfast, replying to the first person to ask for it in 2007. They continue to promote their breakfast with compelling, mobile-first video content.

“Mobile — in the broader definition — is becoming a primary source of information for customers, and brands, too. Listening and engaging unlocks customer value and identifies the path forward. It was key to pinpointing one of our biggest opportunities: All Day Breakfast and is why we used platforms like Twitter to announce directly to a world of breakfast-admirers. Future innovations and conversations on Twitter and in the mobile space will continue to be clear strategic drivers for brands; supporting a cultural journey toward mass personalization, and accelerating the momentum and transformation journeys of brands like ours
McDonald’s USA.” Deborah Wahl, Chief Marketing Officer, McDonald’s USA

Thank you for revolutionizing the second screen and breaking new ground with mobile video.

Brands are no longer limited to the 30-second spot. Now a spectrum of video lengths and formats can grab attention on mobile, from the six-second Vine, to live broadcasts on Periscope. With live video, brands can teleport people around the world and engage in shared, interactive experiences. And with GoPro’s recent partnership with Periscope, the creative possibilities are endless.

Retailer Target has innovated with a variety of Periscope concepts - notably, live streaming its #LillyForTarget clothing line launch in NYC. For The Grammy’s, Target partnered with Gwen Stefani to bring fans a breathtaking live music video on TV and on Periscope. 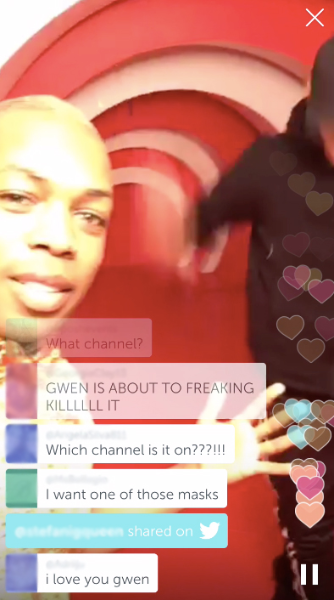 Thank you for going live and teleporting people to the heart of the action.

8) The hashtag and new forms of visual expression

It’s hard to imagine the world without the hashtag. Originally suggested by Chris Messina in 2007, the hashtag has powered communities and movements, and enabled new forms of brand identity. In 2011, Audi became the first brand to integrate a hashtag into its Super Bowl commercial, with fans Tweeting #ProgressIs to win prizes. During the 2012 London Olympics, #TakeTheStage and #StageTaken became synonymous with Adidas.

Hashtags have also paved the way for new forms of creative expression. They have morphed into emojis and gained even more emotional resonance. Coca-Cola was the first brand to launch a Twitter emoji, extending its #ShareaCoke marketing into digital conversations. Now everyone could #ShareaCoke.

And late last year, Taco Bell celebrated the arrival of the long-awaited taco emoji with its Taco Emoji Engine. Anyone Tweeting at the brand with a taco emoji and any other emoji received a GIF mash-up response.

Thank you bringing people closer together and adding more meaning.

9) From customer service to serving customers

It’s easy to forget that customer service used to consist mainly of 1-800 numbers and waiting for an agent. Now people can instantly connect with companies whenever and wherever they choose. According to McKinsey & Company, customer service Tweets to brands have increased 2.5 times over the past couple of years.

The public nature of customer service on Twitter has resulted in many incredible moments.
When Peter Shankman quipped to Morton’s The Steakhouse that they should meet him at the airport with a porterhouse, that’s exactly what they did. Spotify takes customer service queries and turns them into cleverly-curated playlists that delight.

And at the heart of this shift is companies like T-Mobile, who continually innovate to improve their service to customers. Through their award-winning CARE and T-Force groups, T-Mobile not only responds to queries, but elicits public responses such as this and this.

“We prioritize customer service from the top down and social media is our #1 ‘go to’ tool. “It starts with our CEO John Legere, he’s the most accessible CEO on Twitter and his customer engagement is just the tip of the conversation that runs through our entire CARE and T-Force social team. Our future will continue to focus on staying connected, listening and being responsive. Where our customers go, we go!” Mike Sievert, COO of T-Mobile.

Thank you for reinventing customer service and putting people first.

Twitter doesn’t just connect people. Over the years, connected objects have shared amazing Tweets for all the world to see. During the 2012 London Olympics, “Pool Cam” mesmerized us with underwater photos from the aquatic center. Tweets have also reached us from other worlds. Last year, Burberry transported fans to their runway show with personalized shots from #TweetCam. And Just last week, Tweeting pigeons took to the skies of London to highlight air quality levels.

With the rise of live video, people can now connect to experiences in exciting new ways. And experiences don’t get much more unique than The World Economic Forum in Davos. This year, Bank of America brought a fresh perspective to this notoriously closed-door event. They connected people to the diverse opinions of key influencers, engaged their audiences in an ongoing dialogue, and shared important WEF perspectives through daily recaps and Periscope broadcasts.

“What we have learned with Twitter is that when we leverage cultural moments by adding value to the organic conversation, we elevate our brand and drive meaningful connections. When we share some deeper insights around world events, such as at The World Economic Forum, we create brand engagement in moments that matter. No other platform affords us the same opportunity to connect to influencers in these cultural moments, immediately and at scale, and in a way where our brand is a welcome part of a larger shared experience.” Lou Paskalis, SVP, Enterprise Media Executive, Bank of America

Thank you for connecting us to the physical world, and other worlds, and letting us experience it all together.

We’re excited for the next 10 years, and can’t wait to see what you Tweet next.