Counting down to the 2016 Golden Globes

This coming Sunday, the Golden Globes (@goldenglobes) will usher in a new season of celebrity honors and red carpet fashion — and as always, people will turn to Twitter to follow every moment. In anticipation of the big night, fans and stars are already Tweeting, abuzz about their favorite nominees.

We looked at the total mentions of nominated TV series and films related to the #GoldenGlobes since nominations were announced on Dec. 10. Here are the most talked-about contenders on Twitter: 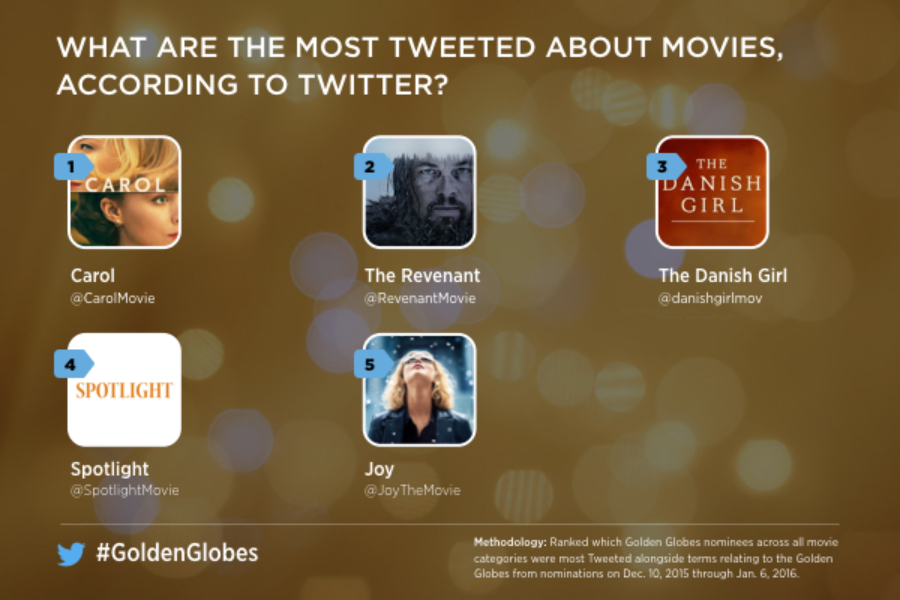 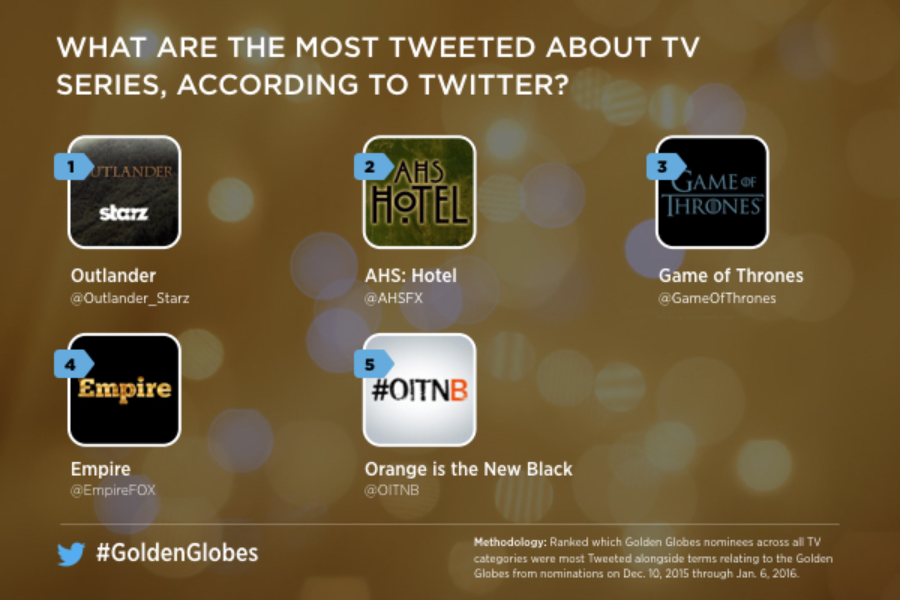 There are 11 percent more nominees on Twitter this year than 2015, offering a deeper look into the show than ever. In addition to all the Tweets coming from Golden Globes attendees and live reactions from fans across the world, Twitter will be at the center of all of the action. Here are some of the Twitter integrations you can expect:

On the red carpet
As the stars make their way down the red carpet, fans will be able to feast on the night’s many glamorous moments, only on Twitter. Stationed at the Hollywood Foreign Press Association’s (HFPA) red carpet stage, a must-stop for talent, HFPA members will conduct interviews with the biggest celebrities, which will be share exclusively on @goldenglobes.

Meanwhile, @NBC will be sharing photos and GIFs from a Twitter Mirror, which captures red carpet selfies Tweeted out in real time.

In addition, a Vine 360 Booth from @TODAYshow will provide a full view of red carpet looks from every angle.

During the show
@goldenglobes and @NBC will be full of real-time clips, gifs and memes from the ceremony, and if you want to see all of the related Golden Globes discussion, Moments makes it easy to follow all of the relevant accounts for the night’s festivities. On Sunday, simply click on the “Follow” button in the relevant Moment and you can see all of the Tweets related to the program in your timeline that night.

A custom Vine channel, on Vine’s Explore page, will capture every unforgettable moment in six seconds or less.

Behind the scenes
Fresh off their wins, the first stop for the stars will be the Thank You Cam, where victors can share their initial reactions via Tweets from @goldenglobes.

For those who want to be a fly on the wall in the photo room, where winners will share their remarks with press, there will be a Periscope broadcast capturing all of the action as it happens from @goldenglobes.

In the backstage HFPA 1:1 interview area, fans will be able to ask stars substantive questions — with the chance to receive a direct reply — thanks to a partnership with the Golden Globes and Amy Poehler’s Smart Girls Ask (@smrtgrls) campaign. Both organizations have already issued their Tweets calling for participation. Questions featuring the hashtag #SmartGirlsAsk are already rolling in. The @goldenglobes and @smrtgrls handles will be sharing all of the replies that night.

For a full recap of the whole event, check back here after it’s over on Sunday night.