Film talent, both actors and directors, have long turned to Twitter during their film promotions to engage with fans and bring attention to their movies. Conversations about film are a constant on Twitter, with more than 165 million Tweets about movies sent in 2015 alone. Today, we’re unveiling research that shows a correlation between the Twitter activity of movie talent and boosts in conversation volume and positive sentiment.

With the Oscars approaching, we investigated ways to measure the benefits of film talent being active on Twitter. Twitter partnered with Crimson Hexagon to analyze the conversation of 33 movies during the film lifecycle: the trailer release, promotional period, premiere, and post-premiere period. The films included *15 over-performers and 18 under-performers, based on box office performance — movies with budgets over $100M were excluded. We examined the volume of Twitter conversation for each of the under- and over-performing movies, as well as the level of Twitter activity for talent involved in each.

Here’s what we learned:

Films with active talent on Twitter see more conversation
Compared to movies whose actors, directors, and other talent did not have Twitter accounts, movies that had talent who were active on Twitter saw a 326% boost in average daily volume of conversation on Twitter. 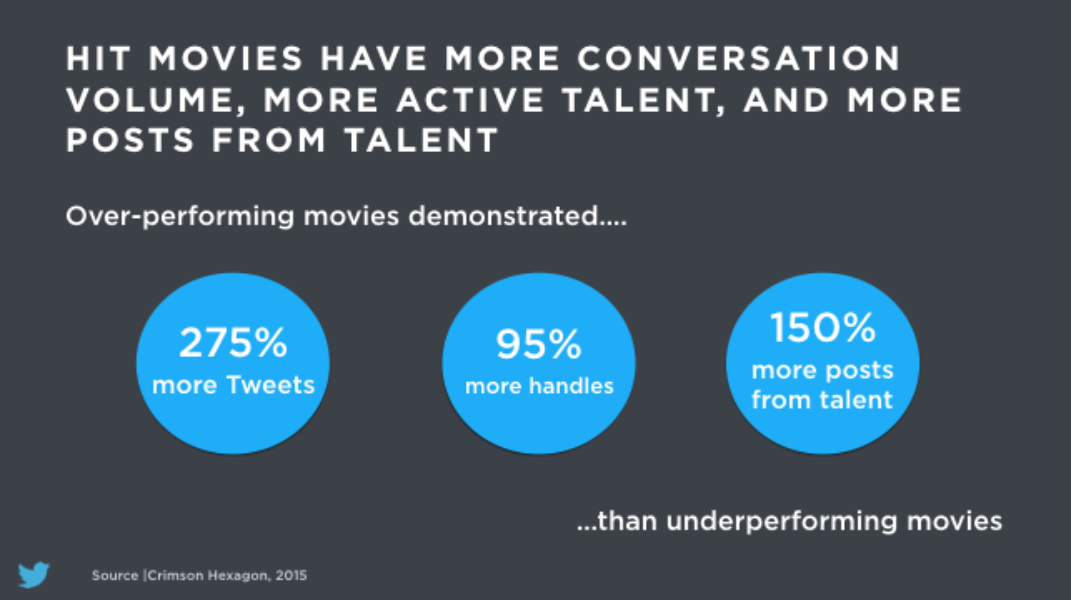 The key takeaway
Involvement of a film’s cast members and director on Twitter is an incredibly effective way for the talent to connect directly with wide audiences and fans. It’s also a best practice implemented by talent whose films receive high volume of conversation and positive sentiment. Overall, film actors and directors are a valuable asset to boost excitement and generate conversation during the lifecycle of a film.

Here are a few of the ways film talent are leveraging Twitter in advance of their film: