As the @Rio2016 Olympic flame was being lit at Olympia, Greece on Thursday, a brand new @OlympicFlame Twitter account sprang to life, which will take fans on an exclusive journey from Greece to Rio de Janeiro. The IOC will also share similar Tweets in Portuguese via @ChamaOlimpica.

For the first time, fans of the Olympic Games will be able to follow the progress of the torch 24/7, as it travels from Greece to Switzerland to Brazil in the build up to the Rio 2016 Olympic Games.

@OlympicFlame featured an exclusive Periscope broadcast of the final stop of the day for the flame. 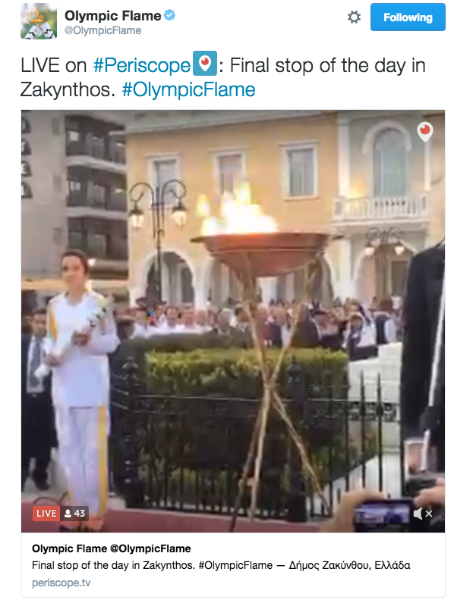 Earlier in the day, @OlympicFlame followed the first of 12,000 runners, Greek world champion gymnast @petrounias_e, as he started the 12,000-mile procession to Rio.

Here’s a Vine of the torch in action:

And of the fans who were on site:

The new account also took the time to wish The Queen of England a happy 90th birthday:

Follow @OlympicFlame for Tweets, Periscopes, and Vines every day for 106 days as Olympic fever builds ahead of the start of Rio 2016.