Gearing up for the #NFLPlayoffs

Another amazing @NFL regular season has come to a thrilling end — and the league, teams, and players have brought their Twitter fans along for the ride of every moment as they all worked towards a common goal of reaching #SB50.

Before the #NFLPlayoffs begin, let’s take a look back at how the second half of the regular season unfolded on Twitter. Teams brought fans inside the huddle:

Here are some great GIFs:

Players have given fans a glimpse of their lives:

And thanks to NFL and Twitter Amplify sponsors, @NFL has offered fans on Twitter in-game highlights, game previews, recaps, behind-the-scenes clips, and more. Here are a few of the best in-progress highlights:

Twitter data
While we just ran through some of the best content from the @NFL, teams and players, we also wanted to sum up what fans have been Tweeting the most about during the season. Through the entire regular season, these are the most-Tweeted games: 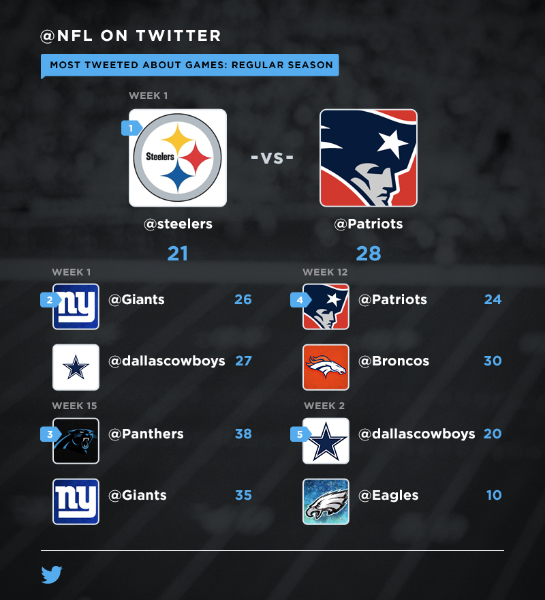 These were the most-Tweeted-about plays: 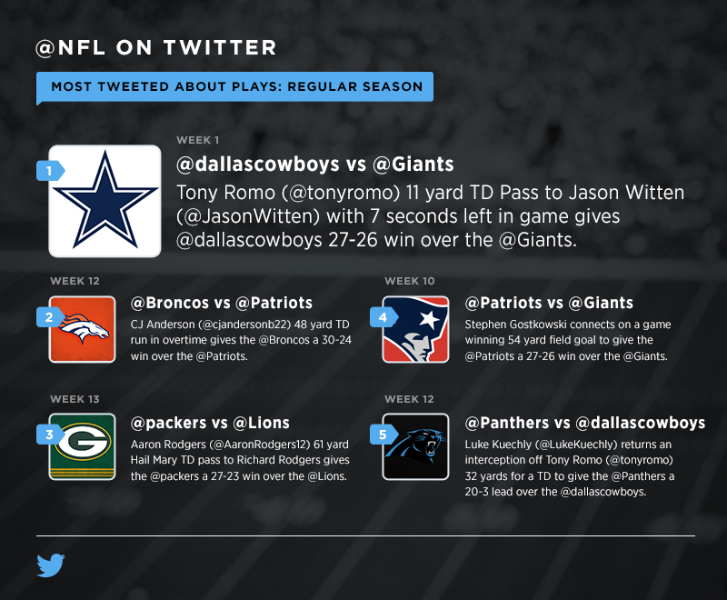 What players have fans buzzing? These are the most mentioned players:

And here are the most-mentioned teams:

How to follow #NFLPlayoffs
Following the #NFL action on Twitter ensures you won’t miss a single moment of the season. Make sure to follow the AFC playoff teams:

And the NFC playoff teams:

In case you do miss a big play or moment, follow @NFL and @TwitterSports for updates. You’ll also want to watch and follow the @RichEisenShow for a weekly segment every Monday on how the NFL played out on Twitter.

And don’t forget to check out @TwitterMoments for the best of the NFL on Twitter. Here’s a recap of last week’s top NFL moments: