Twitter has become the channel of choice for digital diplomacy between world leaders, governments, foreign ministries and diplomats according to the latest Twiplomacy study conducted by by global strategic communications and public relations firm Burson-Marsteller, which has tracked the Twitter activity of world leaders since 2012. 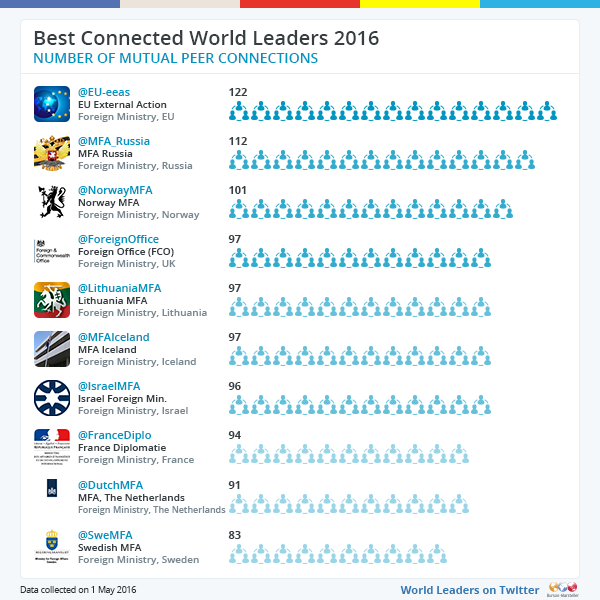 The U.S. President’s institutional Twitter account @POTUS, set up in May 2015 and to be handed to the next US President in 2017, is the most effective, considering he averages 12,000 retweets per tweet. Interestingly, @POTUS only tweets intermittently, but when he does, his tweets become headline news such as this tweet which set the tone for his historic visit to Cuba in March 2016:

The EU External Action Service (@EU_eeas), the foreign policy branch of the European Union, is the best connected government institution, mutually following 122 foreign ministries and world leaders. The Russian Foreign Ministry (@MFA_Russia) and the Foreign Ministry of Norway (@NorwayMFA) are in second and third position, maintaining friendly Twitter relations with 112 and 101 peers respectively.

Many foreign ministries use Twitter to establish mutual Twitter relations, following each other on the platform and regularly @ mentioning each other. The U.S. State Department used Twitter to re-establish ties with its Cuban counterpart on May 26, 2015, the day of the announcement of re-establishment of diplomatic relations between the two countries and the Cuban Foreign Ministry reciprocated several hours later, two months before the official re-establishment of diplomatic relations. The State Department also follows Iran’s President @HassanRouhani and Foreign Minister @JZarif, but neither have yet reciprocated the State Department’s Twitter overture.

The United Nation’s Twitter account @UN is the most popular non-governmental Twitter account, followed by 296 of the 793 world leaders Twitter accounts. The New York Times (@NYTimes) is the most-followed news organization, ahead of @UNICEF which uses the platform as a powerful real-time news disseminator on issues facing children globally. Our own @Twiplomacy account made it into fourth position of non-governmental accounts, followed by 162 world leaders - we often use Twitter direct messages to alert these leaders whenever a new study is published.

Over the past five years, foreign ministries have massively expanded their diplomatic networks, putting their missions and ambassadors on Twitter. According to the @Twiplomacy Twitter list, 5,000 embassies and ambassadors are active on Twitter. In London, New York, Washington, Brussels and Geneva, foreign missions can no longer ignore the diplomatic activity in the Twittersphere and even several Chinese missions are now actively tweeting.

The UK @ForeignOffice has probably the largest ‘Twiplomatic’ network and it maintains a public Twitter list with 305 embassies, ambassadors and deputy heads of mission on Twitter. Canada is second and the State Department is third with 227 and 213 missions and heads of missions on Twitter, respectively.

While each mission has on average less than 1,000 followers, an active diplomatic network is crucial to reach out to local influencers and help amplify a government’s message beyond its borders. In May 2016, the Israeli Foreign Ministry started to retweet positive messages through its 152 official accounts to more than a million followers and invited other Twitter users to join the #IsraelRetweetedMe campaign.

While some diplomats are still doubtful whether they can express all the nuances of their foreign policy in a single tweet, the 140-character focus has helped other diplomats to be more concise and to make a stronger impact in their communications. Diplomats have discovered Twitter as a useful diplomatic newswire and an indispensable news source. Governments monitor each other’s online communications with eagle eyes. It is not rare to see governments send a public tweet or a private Direct Message instead of the traditional diplomatic démarche to another government.

In conclusion, it is fair to say that Twitter has become a very powerful diplomatic weapon and should be part and parcel of every diplomat’s communications toolbox.