Last week, Twitter timelines lit up with live news about drones, virtual reality, and self-driving cars as the annual International Consumer Electronics Show (#CES2016) took over Las Vegas. Over the course of the conference, Tweets about tech launches and the promise of a smarter, more connected life generated more than 1.1 billion impressions, on and off Twitter. 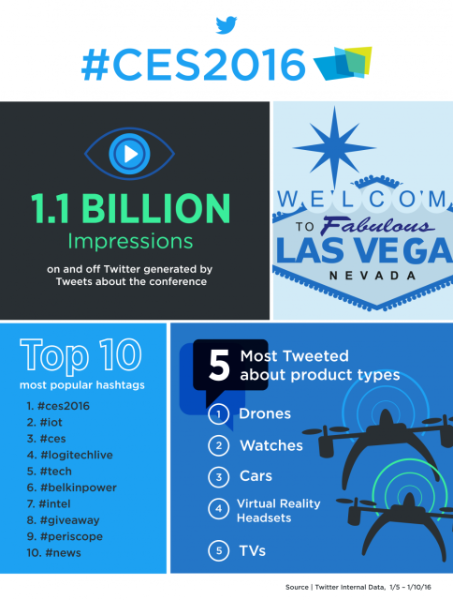 Many brands used Twitter to reach a live global audience, including Intel, Samsung, and Logitech, three of the most-mentioned brands on the platform during the event. Here are five things we learned from their success:

During CEO Brian Krzanich’s keynote address, @intel wowed fans — and inspired them to Tweet — by setting a world record for launching the most airborne drones at one time.

When Intel’s #CES2016 experience gets your adrenaline going. #wearables https://t.co/s5VMkmRDLn

The brand also generated #FOMO by offering glimpses of conference-goers enjoying its products.

#Gaming gets personal at Intel CES2016 as gamers see their own faces in the @Fallout 4 wasteland. #RealSense pic.twitter.com/cQpClMtlbT

3. Send a steady cadence of news.

Samsung shared each of its new products on Twitter. Many related to the Internet of Things (#iot), one of this year’s most popular hashtags and the theme of Samsung’s keynote. The new items included a smartwatch, a smart refrigerator, and a virtual reality headset.

You won’t miss anything when you need more popcorn with TV mirroring on Family Hub. #CES2016 #SAMSUNGxCES2016 pic.twitter.com/yanycE54SC

4. Partner with an influencer.

@Logitech piqued interest in its new offerings by collaborating with popular comedian @bengleib. The brand Tweeted humorous-yet-informational images and videos depicting Gleib’s experiences at the conference, and tagged each one with #Logitechlive so that users could easily follow the story.

.@bengleib in line for the most anticipated #CES2016 gadget yet. Can anyone spare a quarter? #LogitechLive pic.twitter.com/8TvUK5LdBd

@Logitech also spread its news farther by giving users who Retweeted a chance to win prizes.

ICYMI: Every hour of CES we’re giving away a mystery Logitech product. Follow along w/ #LogitechLive #CES2016 and RT for a chance to win!

Want to own the conversation at the next major global event? Check out our success stories for more inspiration.