How the @Broncos #SB50 victory played out live on Twitter

During the @Broncos 24-10 Super Bowl victory over the @Panthers, fans from all over the world joined the #SB50 conversation live on Twitter and were treated to exclusive content all night long.

The celebration
@Broncos took fans along for the ride all season — and especially on Sunday night. Here are some Tweets from the field after their #SB50 win:

And from the locker room:

Players turned to Twitter to thank fans and celebrate the ultimate victory:

Despite their loss, the @Panthers engaged with fans on Twitter:

We launched a special Super Bowl tab in Moments for #SB50, which featured a live game Moment and other #SB50 recaps. Check out a larger sampling of game-related Tweets in this Moment here.

And check out this Moment on how @Beyonce was the talk of the halftime show.

All night, the conversation around #SB50 dominated Twitter and we saw Tweets from all over the world. Click the interactive map below to see how the game and halftime show played out. You’ll see spikes of geotagged Tweets during each score and the halftime show.

Here are the moments that generated the biggest peaks of Twitter conversation during the live telecast: 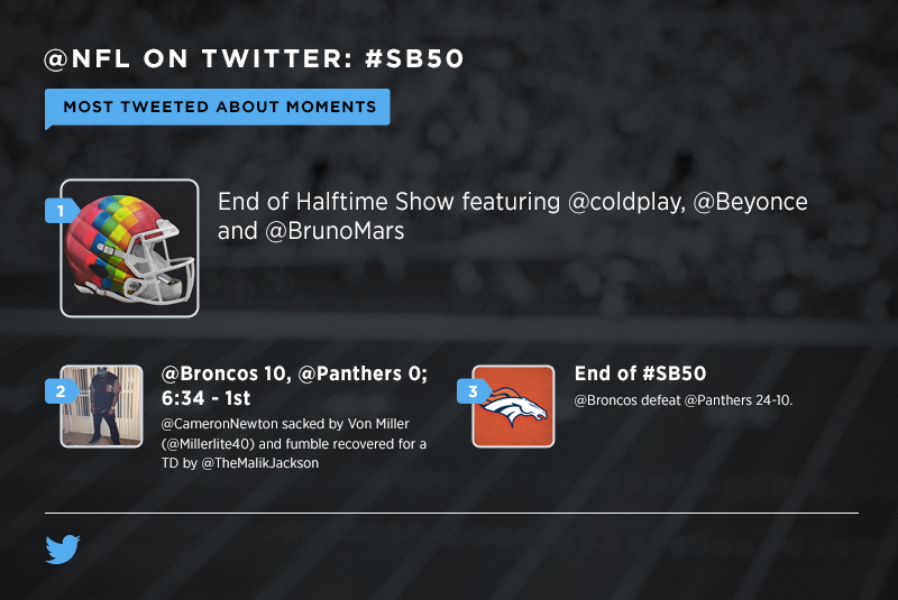 These were the most-mentioned @Broncos and @Panthers players on Twitter during the live telecast: 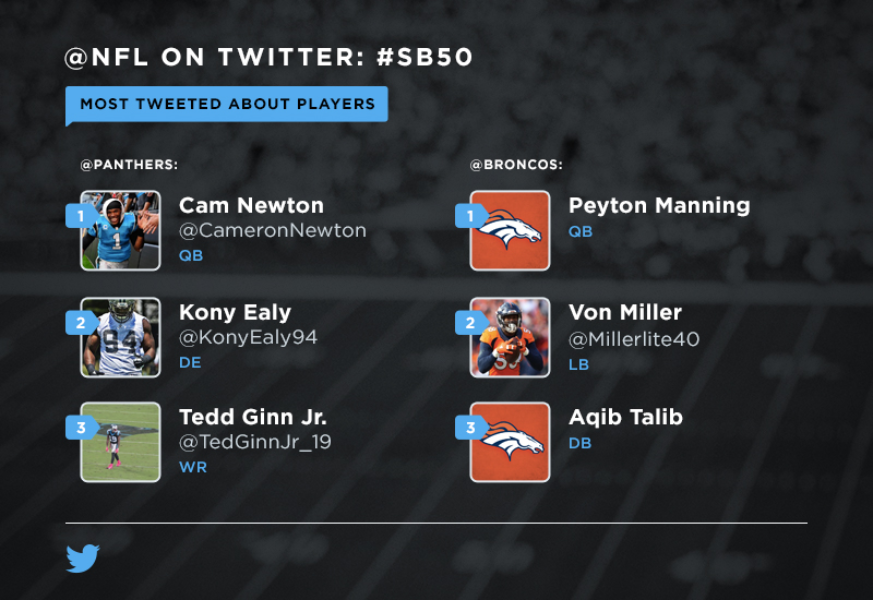 Here are some great #SB50 game highlights from @NFL:

Marshawn Lynch may have announced his retirement on Twitter during the game:

Other athletes turned to Twitter after the big game:

And of course celebrities joined the #SB50 convo, too. Click here to view a Moment highlighting celebs who were at the game.

Brands
It wouldn’t be a Super Bowl without conversation-starting commercials. Like in years past, fans and brands took to Twitter to join in on the conversation. Here’s a moment featuring #SB50 commercials.

@Pepsi used this Super Bowl Promoted Moment to showcase exclusive behind the scenes content throughout the game.

And brands like Marvel, Doritos, Esurance and Toyota took to Twitter to connect with fans in the moment with emojis, Periscope broadcasts, and a chance for their Tweet to appear in its game day commercial: