While journalists braved frigid Detroit temperatures to see the latest auto reveals at the North American International Auto Show (#NAIAS) press preview, Twitter car fans around the world watched the news unfold from the comfort of their smartphones. 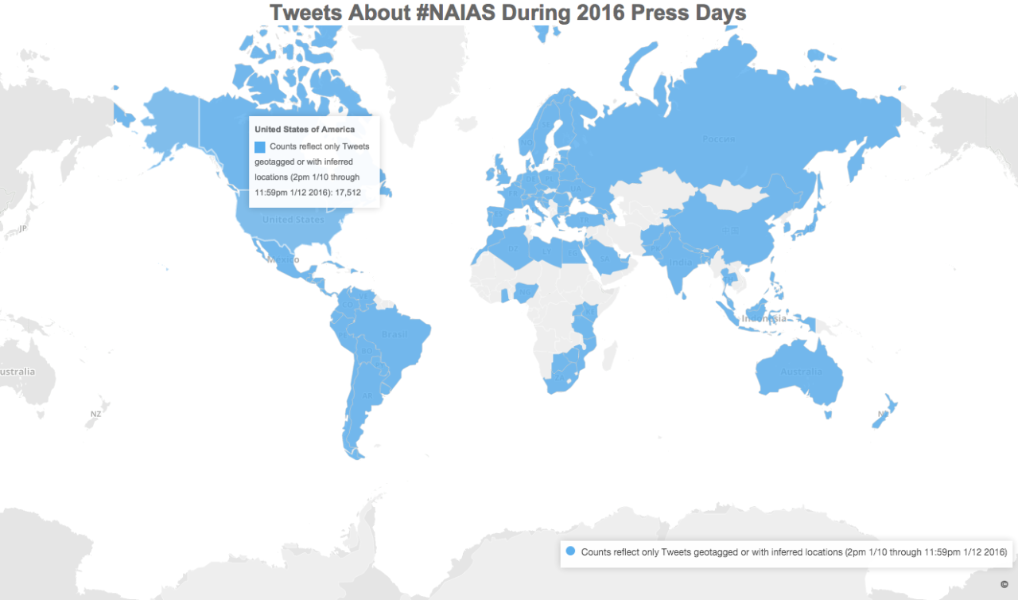 Click on the image to see an interactive map from Wayin showing how the #NAIAS conversation played out across the globe.

According to Wayin, thousands of people sent an average of 25 Tweets per minute about the show this past Monday and Tuesday, adding up to a total of more than 87,000 Tweets.

Click on the image to visit an interactive graph from Wayin showing #NAIAS conversation volume over time.

What was all the talk about? Here are the five reveals that drove the most buzz on the platform*:

THIS, is the All-New 2017 Chrysler #Pacifica. #NAIAS pic.twitter.com/5HOkRulOIr


And these two Tweets also fueled the #NAIAS conversation by generating the most engagements among branded Tweets throughout the press preview:

1. Nissan appealed to the GT-R’s devoted fan base by showing them the 2017 model from all angles.

It’s even more beastly in person. See how the #Nissan #GTR lives up to its reputation at #NAIAS2016 #NissanNAIAS pic.twitter.com/QeIBtgawNo

2. Volvo built buzz by launching a Promoted Trend (#thefutureofdriving) on the first day of the press preview. In this Tweet featuring the hashtag, the brand invited users inside the new #VolvoS90.

Take an inside look at the #futureofdriving with #VolvoS90’s elegant Swedish style and intuitive tech. #NAIAS. pic.twitter.com/J3VniX4E5m

#NAIAS marks the halfway point of the US auto show season. There’s still plenty of time to make a plan for your brand to own the conversation at the New York International Auto Show (#NYIAS) in April — check out these six tips to learn how.

*Measured by Wayin based on the frequency with which brand, model and auto show keywords appeared in Tweets for 30 minutes prior to, and two hours after, the scheduled reveal time.