How to make your DR Tweet copy more effective

Your mother was right: it’s not what you say, it’s how you say it. And when it comes to driving website conversions through direct response campaigns (DR) on Twitter, her advice was never more sage. Recently, we studied 9,000 direct response campaigns in the US to identify key ways marketers can adjust their Tweet copy to improve campaign performance and increase ROI – and then worked with Twitter Official Partner Adaptly (@Adaptly) to confirm our findings. Read on to learn how to draft Tweets that drive powerful direct response results:

Convey urgency now
Tweets with urgency words like hurry, fast, quick, running out, and limited time have a 10% lower cost per acquisition (CPA) and a 10% higher clickthrough rate (CTR). Surprisingly, only 13% of the Tweets in the study used such words.

Tip: Impart urgency in your DR Tweets. You’ll enjoy an advantage over the 87% missing out on greater efficiencies.

For discounts, percentages beats dollars
Tweets that advertise percentage discounts have a 40% lower CPA than Tweets that promote dollars-based discounts.

Tip: The next time you want to offer a discount or run a sale, put that high school algebra to work and figure out the percentage value that equates to the number of actual dollars you’re willing to take off the price. Use that number and see how your Tweets perform.

Results are spelled N-E-W
Tweets that talk about new products or services have a 10% lower CPA, a 23% higher clickthrough rate, and 26% lower Cost Per Link Click (CPLC).

Tip: Even if your product or service itself isn’t new, find some aspect of it that is and give it a new spin. It could be a new feature, usage, geo, or case study… just something new. If it offers value to your audience, it’s worth communicating. 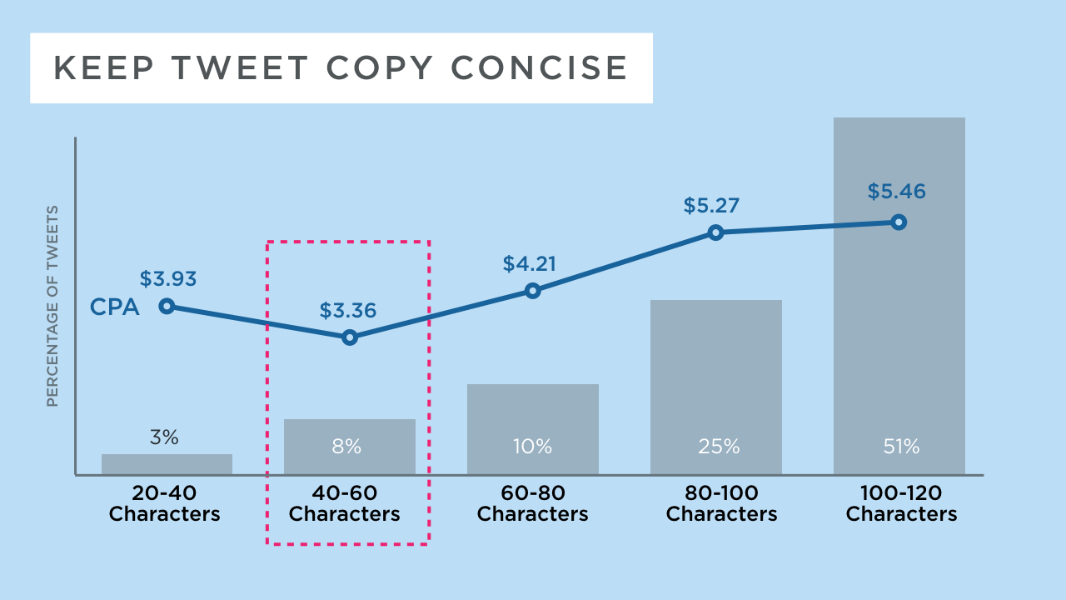 Offer a prize
Tweets that promote a contest have a 40% lower CPA and a 1% lower CLPC. Just 4% of the Tweets in the study included a contest or prize of some sort.

Use your inside voice
Promoted Tweets with 20% or more of their characters in caps had a 2% higher CPA and a 9% lower CTR.

Watch those @ mentions
Tweets that mention another handle have a 6% lower CTR and a 3% higher CPLC.

Lay off the hashtags
A Tweet with one or more hashtags in it has a 24% higher CPA and a 3% lower CTR.

Test your creative
How will you know what’s working and what isn’t? Continuous testing. Vary image types and copy amongst two to three Tweets per campaign and pay attention to the response you get so you can replicate successful strategies.

If you want to see higher performance from your DR campaigns on Twitter, it’s important to reach your target audience with the right messaging and content. Follow these tips for writing effective DR Tweets and you’ll be well on your way to seeing greater efficiencies when driving website conversions.

We’d love to hear about the insights you gain from your own direct response campaigns on Twitter. Share your story with us @TwitterAds.

Methodology
In 2015, we analyzed 9000 website conversion DR campaigns that ran in Q1 and Q2 of 2015. Based on the scores of CTR, CPA and CPLC, we used a t-test to determine what Tweet characteristics were driving statistically significant lift on campaign performance. We identified 9 Tweet characteristics that drove better campaign results, which are listed in this article.

Additionally, in 2015 Q4 and 2016 Q1, we partnered with Adaptly to retest the first 3 Tweet features in new campaigns by creating two version of Tweets for each Tweet feature—one version of Tweet used the Tweet feature, the other one didn’t. In the end, we found Tweets with recommended features showed stronger performance based on metrics CTR and CPA.