New research: How brands can connect authentically with fans on Twitter during #Rio2016

The 2016 Summer Olympics are the first Summer Games since 1996 to be live in the same time zone as the United States. This offers US brands a unique opportunity to connect live with customers during one of the biggest global sporting events. Being in the same time zone means the ability to react in real time — no spoilers or delayed reactions on Twitter.

You may be wondering what to share on Twitter during the Olympics. Read on for tips and ideas based on our research.

Twitter retained market research firm Research Now to uncover what those on Twitter in the US expect from brands during the Games:

2) Inspiration. Research subjects indicated a preference for content that inspires people to think or act on issues of a global scale, in addition to celebrating individual athletes or a national team.

3) Information. Help your audience keep track of important stats and results. The Games last a total of 19 days with 207 nations, 306 events in 42 sports, and more than 10,000 athletes participating. For fans, it can be difficult to keep track of the action, so help them out. 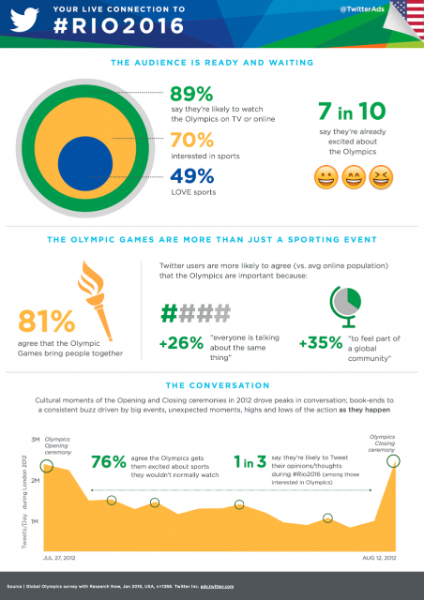 Our research revealed that two out of three surveyed agree that Twitter provides unique insider access to certain people that can’t be found on other platforms. In fact, more than 70% of those surveyed strongly associate Twitter as a platform that provides an expert point of view — compared with 46% to 56% on competing social platforms. Twitter also ranked higher as a platform that provides a unique perspective and is ranked the most timely of all platforms.

As you plan your brand’s Olympic campaign on Twitter, pair these insights with creative that speaks to the emotional connection that people have with the Olympics. Think about joining the conversation in real time on Twitter starting on August 5 along with millions of people around the world.