Since @Wheaties started putting athletes’ faces on cereal boxes, advertisers have known the power of influencers. But with social and mobile media changing the way we interact with each other — and celebrities and brands — the modern endorsement has evolved.

Twitter’s position at the epicenter of a real-time conversation gives companies a place where the power of celebrity endorsements can be combined with the wildfire of word-of-mouth marketing. And we’re finding it’s having an enormous impact on consumer attitudes:

Nearly 40% of Twitter users say they’ve made a purchase as a direct result of a Tweet from an influencer.”

To help advertisers decide how to leverage endorsements in today’s media landscape, we partnered with @Annalect, a leader in data analytics for marketers, to study people’s receptivity to influencers on Twitter. Here’s what we found: 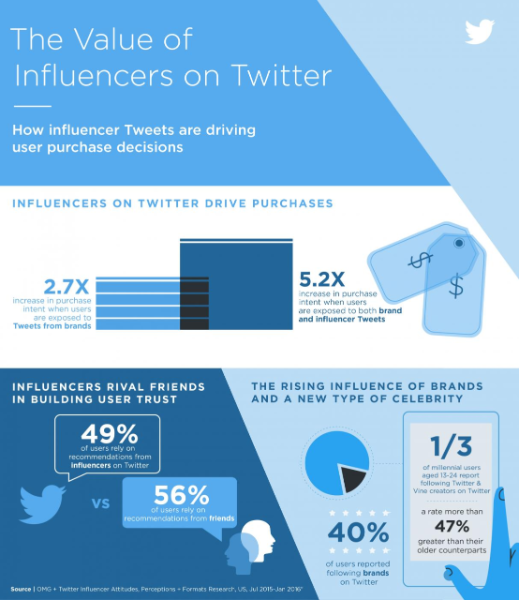 Creator @robbyjayala created a Vine showing how @HP laptops do things his laptop can’t. His lighthearted stunt earned him — and the brand — more than 22,000 Retweets.

Tip: Partner with a creator on Niche (@JoinNiche), a platform that connects brands to a network of social media creators to produce unique, engaging content. Videos, GIFs, and Tweets about your product carry more weight and have higher engagement when they come from these creators than from your brand alone. In fact, a recent Twitter survey that tracked 350 pieces of content from Niche creators found an engagement rate of 13% across all campaigns, and a 56% boost in brand awareness as a result of promoted Niche Tweets.

2. Influencers on Twitter drive sales
Influencers on Twitter make your existing advertising efforts work even harder. Our research showed that those who were exposed to brand Tweets had a 2.7x lift in purchase intent over participants who did not see an advertiser Tweet. When participants were exposed to a campaign that featured both brand and influencer Tweets, the lift in purchase intent more than doubled to 5.2x.

Tip: Pair both brand and influencer Tweets to maximize the impact of a campaign. Engage as a brand on the same level as your influencer, and invite others to join in. It’s the type of word-of-mouth marketing that has a positive effect throughout the entire funnel — and it converts. Campaigns that combined brand and influencer Tweets saw nearly a 5x lift in brand awareness, ad recall and purchase intent over traditional digital ad formats.

3. The rising influence of brands, and a new type of celebrity
Not surprisingly, our study showed traditional influencers like actors, athletes, and musicians continue to have the broadest reach among audiences. More than half of Twitter users follow actors and musicians. Perhaps less expected was the fact that people said a brand’s own product recommendation held significant influence over their decision. Nearly 40% of respondents indicated they followed brands on Twitter. Of those respondents, 60% said that they followed brands to learn about products, as opposed to influencers, who they predominantly followed for entertainment.

Age also played a key role in predicting which influencers a consumer related to — and didn’t relate to. Older demographics (people aged 45 and up) tended to follow a wider range of influencer accounts and showed a preference for household names. Millennials, on the other end of the spectrum, were disproportionately interested in “handheld names” — Twitter and Vine creators. Participants aged 13-24 were twice as likely to evaluate an influencer by their social presence and follower count as older audiences, and one-third said they followed and engaged online with these social media celebrities.

Tip: Tap into a new generation of celebrities using Niche. The handheld names on this platform are the most relatable and credible influencers for younger audiences, and are only just starting to gain traction with most marketers.

As part of their “Get Your Penney’s Worth” campaign, @JCPenney teamed up with internet maven and Niche creator @JessicaHarlow to turn heads on Twitter. Together, they staged a giveaway on Periscope where Harlow would drop a penny down a pegboard and award members of her virtual audience @JCPenney gift cards.

Niche can help you discover millennials’ favorite creators, evaluate who is most likely to create content that will resonate with your brand’s audience, and start aligning with creators proven to bring brands tangible, measurable results.

The study
In partnership with Annalect, a division of Omnicom Media Group and leader in marketing data, we conducted a two-part experiment. In the first phase of analysis, more than 300 respondents were surveyed to understand how consumer receptivity toward brand influencers on Twitter compared with their perceptions when interacting with alternative ad formats and word-of-mouth marketing. The second phase of research explored our findings further through an online lab experiment in which over 500 users were exposed to traditional digital ad formats as well as promoted brand and influencer Tweets in-situ. The goal was to study the direct impact each ad format had on brand health metrics like awareness, favorability, and purchase intent.