Not all TV audiences are created equal: we’ve long believed that viewers respond differently to commercials depending on how they feel about what they’re watching. And when it comes to getting a pulse on people’s emotional reactions during live TV, now we know that Twitter can drive even stronger results for brands.

We partnered with media agency Starcom and Canvs, a social TV analytics company that studies emotions within social media content, to understand how programming influenced viewers’ emotions, as tracked by Tweets — and, in turn, how those emotions drove an audience’s ability to both remember TV commercials and act on them. The findings show the value of emotions to marketers, and how brands can engage Twitter users who are already responding to what is on their TV screens. 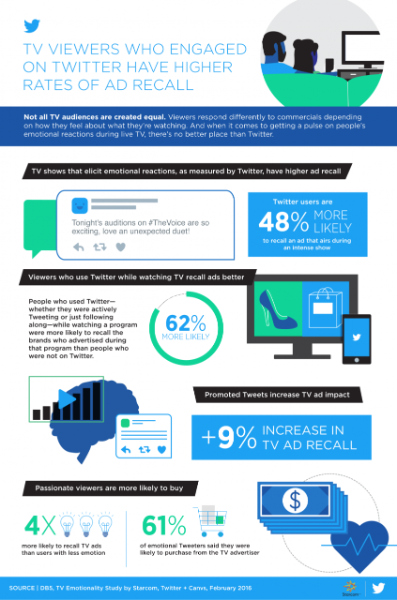 1. Higher ad recall for TV shows that elicit emotional reactions, as measured by Twitter
Canvs identifies the instances when a high percentage of Tweets about a TV program contain emotional reactions. During such programs, viewers are 48% more likely to recall an ad than those who watched programs that have a lower reaction rate*.

Tip: Target TV programs that are more likely to elicit an emotional response on Twitter. Find the kind of programming that resonates emotionally with the audience you are seeking to reach, and then use Twitter targeting to align your campaigns with these shows.

“This research shows that audiences who are emotionally invested in a TV show are more responsive to both TV advertising and corresponding Twitter advertising—finally dismissing the nagging notion of the distracted social viewer. Social and emotional TV data combined help illustrate the value of emotional engagement for brands beyond a single impression on either screen. This can be done with Twitter TV targeting, which lets brands build cross-screen frequency with people who are engaging with shows on Twitter.”

Tip: Sync your TV ad campaigns with Promoted Tweets to reinforce your message. TV advertisers running concurrent Twitter ad campaigns experienced an average 9% lift in ad recall, compared to campaigns that did not run Promoted Tweets. Adding video to your Tweets can further enrich a multi-channel campaign, letting you start the story on TV and give people an opportunity to participate on Twitter.

3. Passionate viewers are more likely to buy
Partnering with Canvs, we zeroed in on viewers who were emotionally invested in a program, as expressed by Tweeting responses like “love” and “excited” instead of simply noting they were following along. Emotionally invested viewers were three times more likely to recall advertisers than people who Tweet with more neutral messages. Further, 61% of this emotionally reactive group said they were likely to purchase from that brand now or in the future.

Tip: Run Twitter campaigns that tap into emotions around a show. Link your creative to show content as it unfolds. Dramatic moments such as voting, cliffhangers, and the final minutes of a close game are all great opportunities to spark further conversation.

The study
This study is the result of our Social TV Lab partnership with Starcom. We partnered with research firm DB5 to survey 3,536 Twitter and non-Twitter users who viewed the same episode of a TV program. On the day following the show, we asked people about their emotions toward the program, their Twitter activity during the show (if any), advertisers they recalled, and how favorably they viewed brands after seeing their advertisements. For participants willing to share their Twitter handles, Canvs’s emotional analysis helped enrich survey responses with data on participants’ reactions.

*”Reaction rate” is defined as the percent of Tweets associated with a given program that have emotions compared to all of the Tweets for that program. The Twitter data is compiled by Nielsen and analyzed by Canvs.