In a few days, baseball fans from around the world will turn to Twitter to follow their favorite teams and players as each takes a first step towards winning the World Series. With #OpeningDay around the corner, here’s how to follow the action on and off the diamond.

To commemorate the start of the new season, Twitter and @MLB are asking baseball fans to wear their favorite club’s cap on opening day. Fans can submit photos, videos, and engage with each other via #CapsOn which will unlock a new Twitter emoji:

@MLB got fans excited about the initiative by giving away 150 free caps last week, exclusively on Twitter!

Spring training
The 2016 @MLB season kicked off on Twitter back in February with players reporting and the start of spring training.

Each @MLB team was busy giving fans a behind-the-scenes look, from a Twitter Mirror to a new ritual of broadcasting pregame festivities from Periscope:

To join the conversation, use the @MLB’s official hashtag for the season opener: #OpeningDay.

You can also enjoy official perspective from Major League Baseball and its partners from these accounts covering both #OpeningDay and the entire season:

Twitter all-star lineups
We were curious which players fans have Tweeted the most about during spring training. The two starting lineups below for the American and National League are teams made up of the players who were mentioned the most (by position) on Twitter during spring training, forming a team that would surely be the envy of any manager in in baseball. 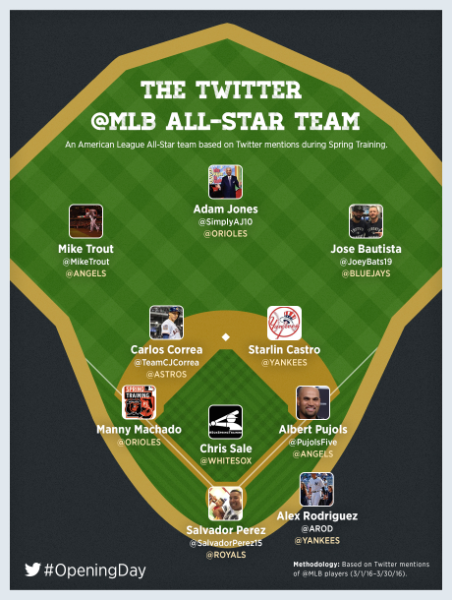 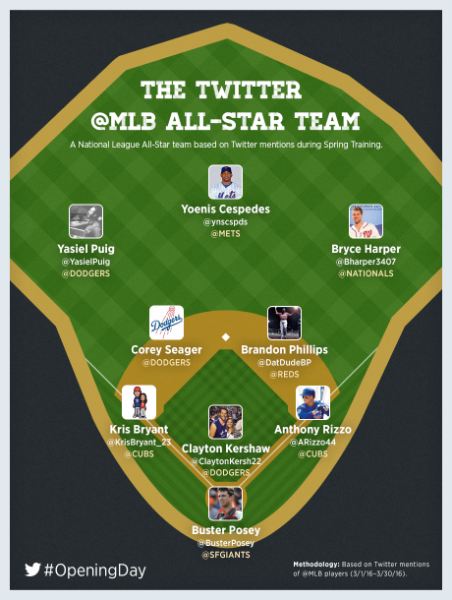 Enjoy Tweeting with your favorite @MLB teams and players all season long — and don’t forget to wear your club’s hat for #CapsOn on Monday!