After an exciting season, the 2016 College Football Playoff (@CFBPlayoff) is finally here, and all of the action on and off the gridiron will play out on @Twitter.

The College Football Playoff Selection Committee announced the field for this year’s #CFBPlayoff. On New Year’s Eve, No. 1 Alabama (@AlabamaFTBL) will take on No. 4 Washington (@UW_Football) in the Chick-fil-A Peach Bowl (@CFAPeachBowl), while No. 2 Clemson (@ClemsonFB) will face No. 3 Ohio State (@OhioStateFB) in the Playstation Fiesta Bowl (@Fiesta_Bowl).

While the semi-finalists had their say, so did the fans. After the Selection Committee announced this year’s field, media and fans took to Twitter to debate the biggest winners and snubs using #CFPReveal.

The road to the playoffs
The top four teams not only had successful seasons on the gridiron, but also were among the best in the nation on Twitter. Here’s a look at some of each team’s top Tweets of the season:

Alabama senior running back Lawrence Erekosima got the surprise of a lifetime on Senior Day when his mother made a surprise appearance on the field after returning a few months early from Kuwait, where she serves in the U.S. Army.

The entire Clemson squad had some fun in the locker room and took part in the #mannequinchallenge.

Ohio State got creative in the lead up to their matchup with rival Michigan, crossing out the “M” in signs and props around campus.

Washington celebrates a lopsided victory over Oregon in October.

To stay connected throughout the #CFBPlayoff, look no further than @ESPN for score updates, highlights and analysis throughout the day and evening. And for both games, you can dive into the conversation by Tweeting using one of the official hashtags:

ESPN will complement its game telecasts and official @CFBPlayoff coverage with additional college football content on Twitter provided by @ESPNCFB, @SportsCenter and @CollegeGameDay.

Follow @CFBPlayoff for official news and updates from the CFB Organization and Selection Committee:

Twitter Amplify highlights the #CFBPlayoff
This season, @Twitter partnered with the @pac12, @bigten, @FOXSports, @theACCDN, and @CampusInsiders for our first ever College Football All Access Amplify program. Each week, fans were given a front row seat to the best moments of gridiron action, directly within their timelines. The experience was powered by @Allstate, @Buick, and @Ally, among others.

For the #CFBPlayoff, @CampusInsiders will create matchup previews in addition to a nightly “Play of the Game.”

Fans Tweeting with #CFBPlayoff, #RollTide, #ALLIN, #GoBucks and #PurpleReign will see a unique Twitter emoji icon appear in their Tweets throughout the postseason. 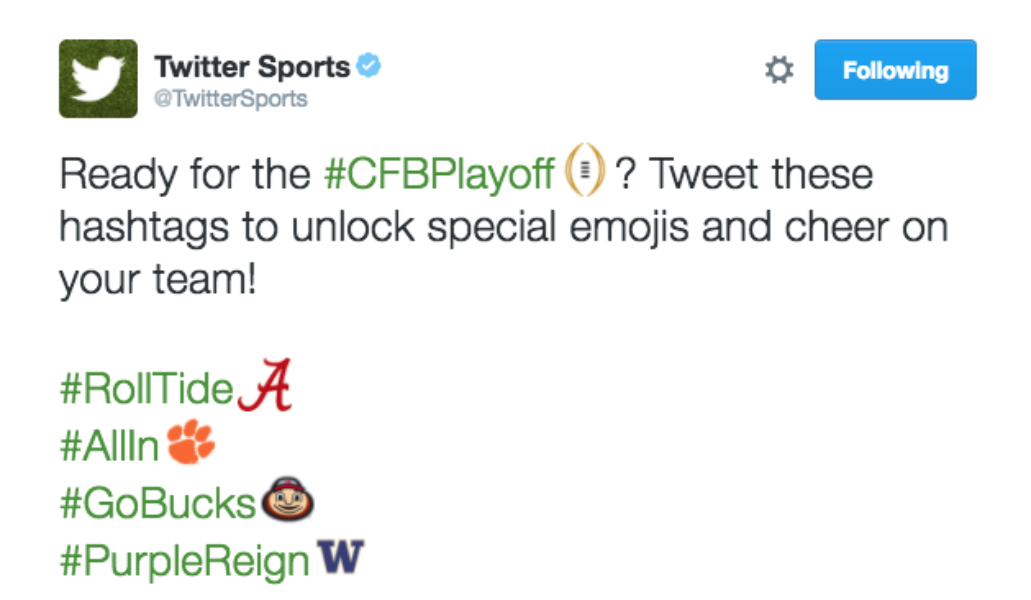 Enjoy the College Football Playoff, and check back after the #NationalChampionship when we recap how the games played out on the field and on Twitter!