The March Madness journey to the #FinalFour

College hoops fans, teams, players and more have turned to Twitter to join the live conversation for yet another thrilling #MarchMadness tournament. As we head into the #FinalFour this weekend, here’s how to follow the action along with some of the best content featuring the four teams still standing.

Emojis and Moments
To help bring March Madness Tweets to life, we’ve partnered with the NCAA and Turner Sports on Twitter emojis. Fans have Tweeted with these hashtags throughout the tournament to bring color to Tweets:

Now it’s time to break out #FinalFour and #NationalChampionship along with all of your #MarchMadness Tweets!

And should you miss any Tweets, turn to Moments for all things #MarchMadness and #FinalFour. On Moments, there is a March Madness tab full of all the great content and stories unfolding during and around the games.

Villanova vs. Oklahoma
Saturday’s first match up will see two no. 2 seeds battle for the chance to win play in the National Championship. Follow both teams via @NovaMBB and @OU_MBBall.

Here are some great Tweets from Nova’s tourney run:

The Sooners have brought fans along for the ride on Twitter too:

Syracuse vs. North Carolina
The second #FinalFour matchup pits ACC foes against each other. Follow @Cuse_MBB and @UNC_Basketball to stay close to both squads.

No. 10 seed Syracuse kept the #Cinderella story alive with a comeback win over Virginia last Sunday. Here are some Tweets from the Orange, including their delight at making the tourney as they were seen by many as a bubble team entering #SelctionSunday:

UNC lived up to their billing as they are the only one seed in the #FinalFour. The Tar Heels have brought fans along for the ride, especially last Sunday:

Highlights and broadcast info
@marchmadness, in partnership with Turner Sports and the NCAA, is the official handle of the tournament, offering up everything from in-game highlights to talent analysis to score updates. Here are some of the most memorable moments of the tourney so far:

US fans can watch the action this weekend on Turner Networks (TBS, TNT, and TruTv). To stay connected throughout the tournament, look no further than these accounts for score updates, highlights, behind-the-scenes content, and analysis:

Most shared photos
College hoop fans have Tweeted and shared a lot of #MarchMadness images. So we’ll leave you with this image below that showcases the most shared #MarchMadness related images in Tweets since the tourney began. Images are scaled to represent engagement of each image. 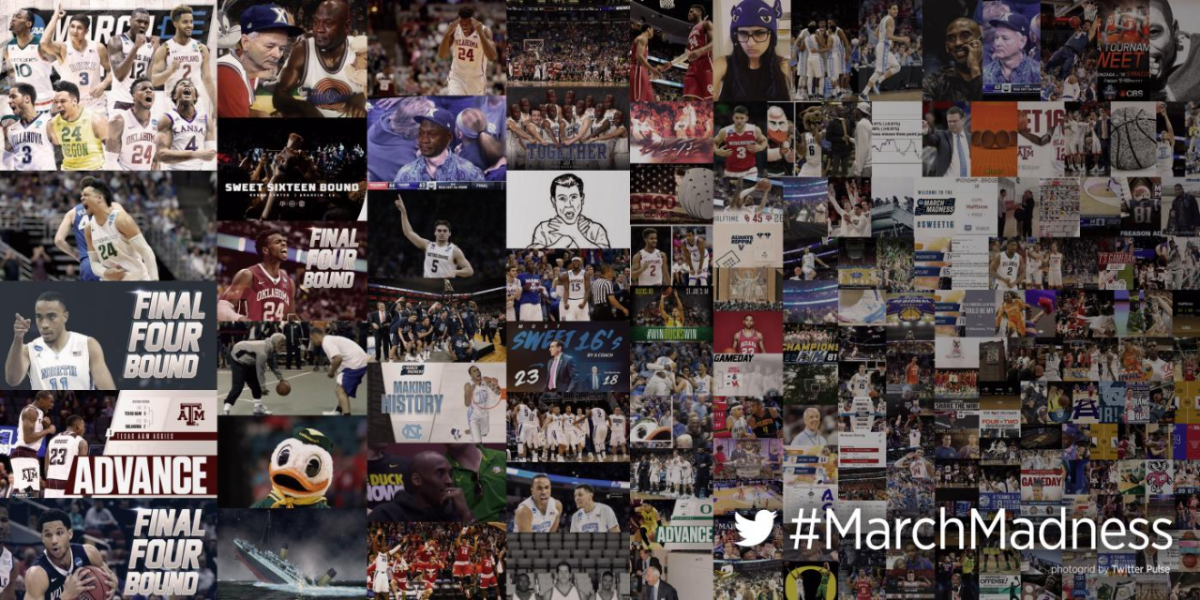