Tips for engaging live: how automakers used Periscope at #NYIAS

Anyone who came across the sleek, powerful Nissan GT-R and Jaguar F-Type SVR coupes during their unveiling at the 2016 New York International Auto Show (@NYAutoShow) won’t forget the experience.

But how do auto manufacturers reach and connect with fans who might be thousands of miles away from the action in Manhattan? With live video on Periscope, Nissan and Jaguar are letting fans do more than just eavesdrop — they’re fully immersing them in the high-speed excitement at every turn. Scroll down for tips to create your own live engagement.

“There’s magic at the auto show,” says Evan Weissbrot, executive director of engagement for Nissan United at TBWA Worldwide. “Our mission is simple — we want to share that magic.”

Nissan (@Nissan, @NissanUSA) was one of the first auto manufacturers to experiment with Periscope at last year’s New York Auto Show, just a few weeks after Periscope launched. This year, the brand amped up its streaming efforts, blanketing the reveal of its high-performance GT-R supercar with fresh vantage points. Viewers saw the model’s retooled luxury interior and its hand-built motor — signed by the craftsman who put it together.

“We saw what our fans were asking for in real time, and we were able to open a stream and give it to them,” explains Weissbrot. “[Periscope is] not just a portal, but an interactive experience.”

And for Nissan, Periscope is even more than a livestreaming tool, it’s a way to collect real-time consumer feedback that informs marketing plans.

“After Periscoping the Maxima last year, we saw an amazing response from people about the quality of the interior,” says Katie Hollenkamp, Nissan United’s global business integration director. “We were able to take that feedback back to the marketing team and highlight it even further in our ongoing communications.”

In fact, part of the current GT-R campaign is based on insights gathered via social media. When Nissan saw the incredible user engagement the GT-R’s iconic quad-taillight rear view inspired, they decided to make it a visual centerpiece of their campaign.

The quad-taillight rear view now graces advertising assets from digital to out-of-home, and everything in between. “The numbers from Twitter showed that the backside of the GT-R is what viewers really wanted to see,” adds Hollenkamp. “That data helped inform strategic decisions for the campaign.”

For Jaguar (@JaguarUSA), NYIAS offered a chance to flaunt, not just the FType SVR’s supple new sheet metal, but its hard-core performance chops, too. To stir excitement leading up to the event, the brand rented out the Park Avenue Tunnel and sent the 570-horsepower convertible through it at top speeds. Its Periscope feed gave users an up-close glance at the speed run no matter where they were watching from.

The SVR tunnel drive was tailor-made for Periscope, allowing Jaguar to pull back the curtain and provide access to an experience that, otherwise, consumers and fans wouldn’t have had access to. “Only a handful of elite global and local media were able to join us at the Park Avenue Tunnel,” noted Chris Jeyes, Communications Specialist at Jaguar Land Rover, “but by leveraging Periscope we were able to bring that level of exclusive access to our consumers in real time.” 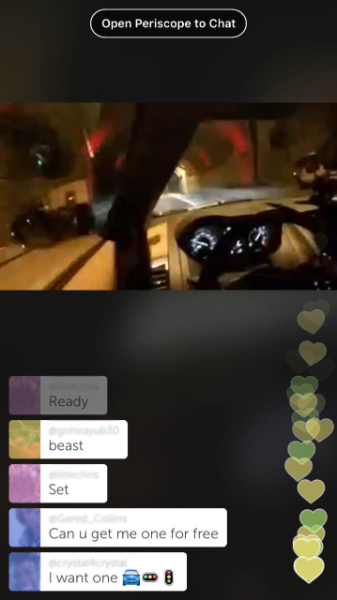 “We were drawn to Periscope because its integration with Twitter provides fans with a ‘click free’ experience — it’s an immediacy that isn’t available on any other platform,” explained Jon Mottel,
Associate Director of Paid Social for Jaguar at Mindshare. It makes sense: Live-action video is an engaging way to show what the fastest production Jaguar ever made can actually do — in the moment.

For both Nissan and Jaguar, the Periscope broadcasts expanded the brands’ reach with coveted influencers within the auto category.

“It was the first time we ever saw the ‘Broadcast too full for comments’ message,” says Nissan’s Weissbrot. “From that perspective, it was a success.”

The broadcasts also generated a variety of video content that the brands then repackaged and replayed on Twitter and YouTube, giving fans who missed the live reveals a chance to catch up later on.

Tips for using Periscope to surprise and delight

Periscope video can be a valuable tool at a live event. Here are some tips for how it can help any marketer build excitement and boost engagement:

Posting images and other countdown teasers leading up to a Periscope broadcast lets fans know when to join in, and also lets them share that information with others.

At the auto show, Jaguar Tweeted multiple times prior to the live event and broadcast, to increase viewership.

Broadcast special moments for fans in real time, and give them something that they won’t see on other platforms.

Jaguar’s fans had their senses revved up when they heard the F-Type SVR echo through the Park Avenue tunnel, and Nissan showed viewers its craftsmen as they built a GT-R engine at the brand’s display booth on the New York Auto Show floor. 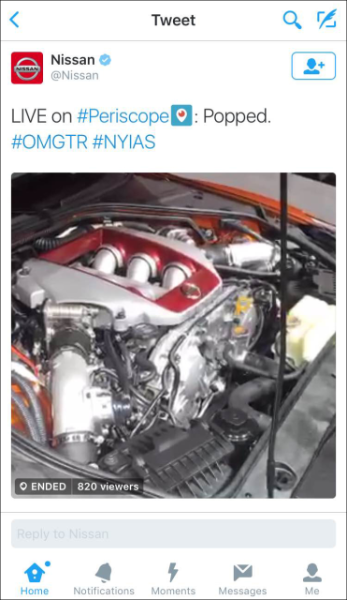 3. Inform your strategy with real-time results

By tracking questions and comments on Periscope — and the action within your feeds — you can make fast, informed programming decisions. During the GT-R reveal, Nissan discovered that fans were responding strongly to the older GT-R “heritage” models. The brand’s marketing team pivoted and created streams for each of the nine older models, and launched an interactive Twitter Poll to see which car fans wanted to see first.

By recognizing which parts of a broadcast receive the most hearts, you can identify elements of the video that generate the strongest responses. Then, you can use that information to choose future broadcast topics and tailor them to your audience. Insights gleaned from a Periscope broadcast can even help inform future marketing campaigns.

Bringing your fans closer to the action with Periscope means you can build valuable two-way conversations that expand your brand and deliver vital market information when it matters most — in the moment.