When and where will the General Election be called? Politicos of all stripes had been chewing on the question for months. In October last year, it seemed like the smart outside money was on a snap election in November. November passed and still no date. As consensus formed around the likely voting day, speculation remained around what form the announcement would take. Then, last Wednesday at 9:58am, a Tweet from @EndaKennyTD informed the nation that the election would be held on Friday, February 26. The news broke on Twitter and within minutes the Tweet was everywhere - online, on radio and TV. In the 48 hours after the dissolution of the Dáil, Tweets about #GE16 were viewed 10.8 million times, on and off Twitter. And 35,622 Tweets were sent during TV3’s Leaders Debate, making it the most talked about programme in Ireland since last year’s Late Late Toy Show.

The nature of the Taoiseach’s announcement chimed with conversations we’d been having with Irish political parties since last summer. We talked about how Twitter was the live public square, the public space - a forum where conversations happen and announcements are made. As politicians and activists found their voice on the platform, they sought guidance from experiences in other countries. They looked to Spain, the UK and the US, where politicians had skilfully shaped election narratives or been exposed by the rigour of this fundamentally democratic platform.

Journalists, too, are keen to integrate Twitter even further into their work. Rob Owers, who manages our news and government partnerships, held training sessions with all major publications and broadcasters, demonstrating the worth of Twitter, Periscope, Vine and TweetDeck to the process of gathering and distributing news during an election campaign. Periscope, in particular, is proving more and more fascinating to politicians and journalists as it becomes part of the Twitter timeline and users express an interest in seeing the election, and all its behind-the-scenes moments, live.

We saw this with @TheUSI’s Town Hall events in campuses across the country. As students questioned candidates, both in person and remotely, hundreds joined Periscope broadcasts. The Trinity College event saw over 1,000 people join through Periscope, reflecting the power of USI’s #MakeASmartVote campaign and their voter mobilisation efforts which can be traced back to last year’s marriage referendum. In their minds, #MarRef and #HomeToVote activated a generation which was thought to have either emigrated or become apathetic beyond retrieve. USI disagreed. It was social media, in large part, which had brought them together again last May. It would be social media, and Twitter, which would reach them again. @TwitterDublin will support the work of USI as it escalates its mobilisation campaign.

Indeed, @TwitterDublin has sought to engage Irish voters wherever possible. You can access a full list of candidates here and on February 7 you may have noticed that #CheckTheRegister was the promoted trend in Ireland as we sought to raise awareness of the deadline for signing on the supplemental voting register.

As the campaign continues, we’ll work with journalists, candidates and civil society to ensure Twitter is what you need it to be: the online public square of Ireland. And in the final two weeks, as the noise increases, we’ll be blogging about the best use of the platform, pointing you to great content like this joust between Sinn Féin and Fine Gael.

If it happens on the campaign trail, it’ll happen here first. 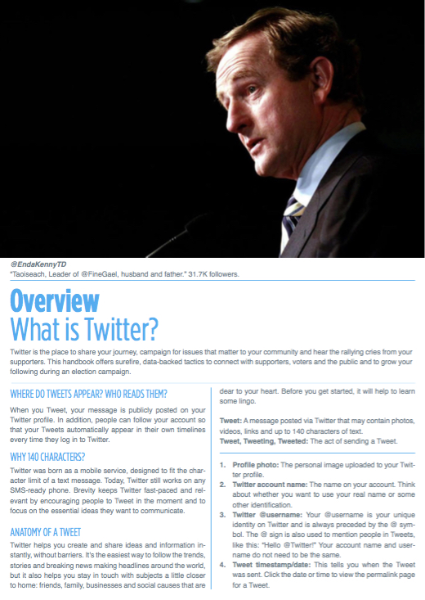