The @NFL’s ultimate prize is up for grabs this Sunday when the Denver @Broncos and Carolina @Panthers meet for what should be a thrilling Super Bowl. No matter where you are, consider Twitter, Vine, and Periscope your home for all things #SB50.

The best and fastest way to join the live Super Bowl conversation and connect directly with the teams and fellow fans is to Tweet with, and search for, #SB50.

To help bring #SB50 Tweets to life, Twitter and the NFL have partnered on special #SB50 emojis. Fans can Tweet with these hashtags (#SB50, #Broncos, #KeepPounding) to bring color to their Super Bowl Tweets:

Worried you’ll miss some of the most important #SB50 Tweets? Don’t be! Check out Twitter Moments by clicking the lightning bolt tab. From now through the game, there will be a temporary Super Bowl tab in Moments, full of all the great content and stories unfolding during and around the game. 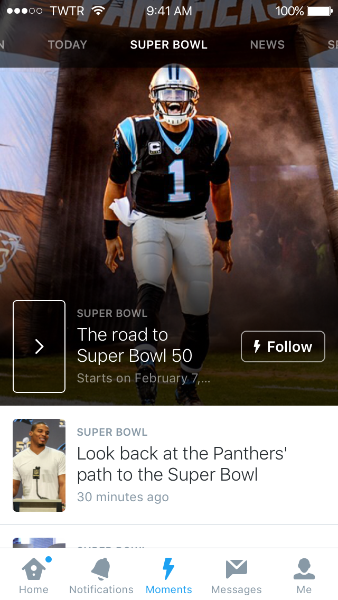 You can also tune into Vine on game day via their Super Bowl channel. Fans will see Vines from the field and behind the scenes, as well as posts from Viners and fans around the world. Tag your Vines with #SB50 and/or #superbowl and you might see them included in this experience.

Periscope is getting in the game as well, by enabling popular hashtags that trigger a flurry of SB50-themed custom hearts. They’ll float to the top of the screen alongside the traditional Periscope hearts, and are triggered when you include any of these hashtags in the title of the broadcast: #SB50, #SuperBowl, #Broncos, and #KeepPounding.

Follow the Broncos
@Broncos is your source for all things Denver and you can join the convo with #Broncos. Follow Denver players — such as @DeMarcusWare and @ESanders_10 — on this list.

Denver EVP and GM John Elway is on Twitter, too: @johnelway

On Monday, both teams and players participated in Opening Night. Here are some Tweets from players:

Panthers running back Jonathan Stewart (@Jonathanstewar1) turned to Periscope to bring fans along for the ride as the team rode to Opening Night: 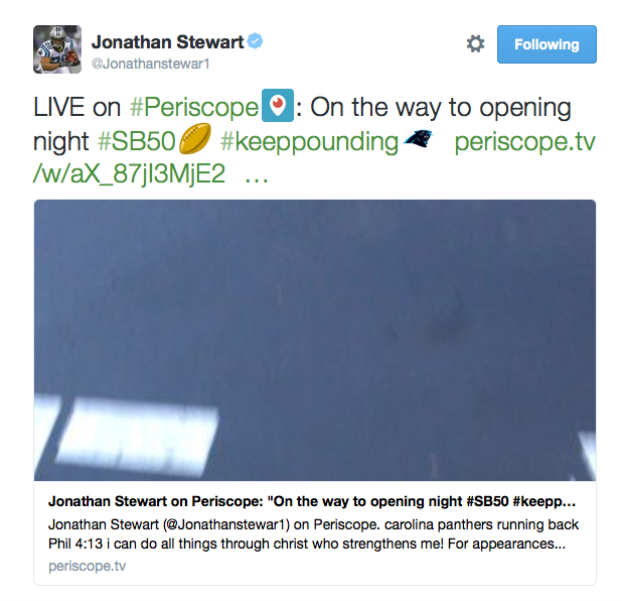 Both teams broadcasted live from Opening Night on Periscope too: 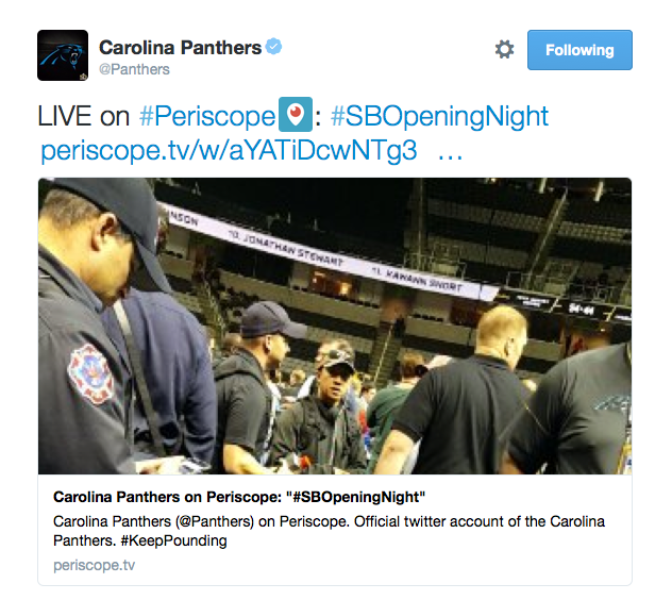 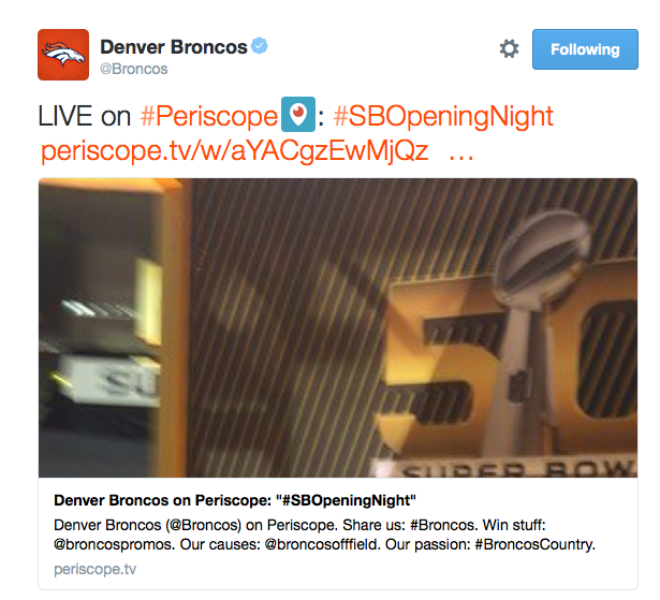 @NFLNetwork took fan questions from Twitter and had players answer them:

CBS is the official #SB50 broadcaster. You can follow @CBSSports and @NFLonCBS for behind the scenes content and news:

Here are some other NFL related media accounts to follow:

Speaking of media, we’re thrilled to be playing host to FOX Sports at Twitter HQ in San Francisco, as GARBAGE TIME WITH KATIE NOLAN (@garbagetime), OUTKICK THE SHOW (@Outkick), and @TheBuzzerOnFOX have been shooting both live and taped segments from our office all week long.

The @Pepsi Super Bowl Halftime Show is always one of the most-Tweeted moments of the big game. This year’s #PepsiHalftime performance will be headlined by @Coldplay and @Beyonce.

Another artist account to follow ahead of the big game is @LadyGaga, who will sing the national anthem to kick off the game.

Twitter data
People from around the US have been Tweeting about the teams in the past week, so we were curious which team they’ve been talking about the most. Each state is filled in with the color of the team that has had the most Twitter chatter over the past week. Click on the image below or here to interact with the map (you can click on each state to see the percentage breakdown too): 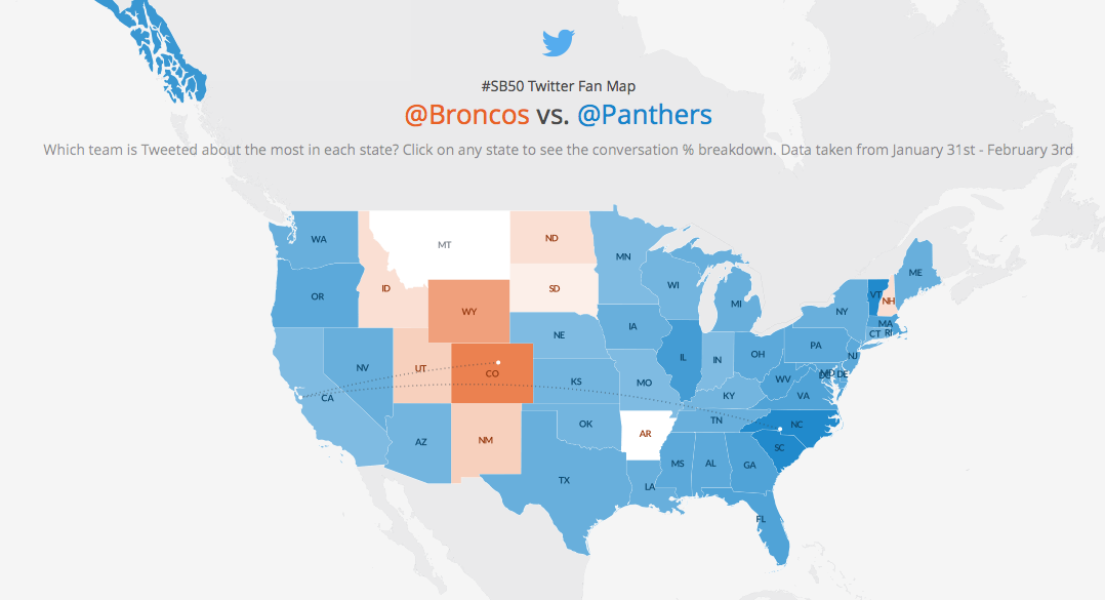 NFL fans have been Tweeting about top plays and moments all season long. These were the most Tweeted @Panthers moments this season: 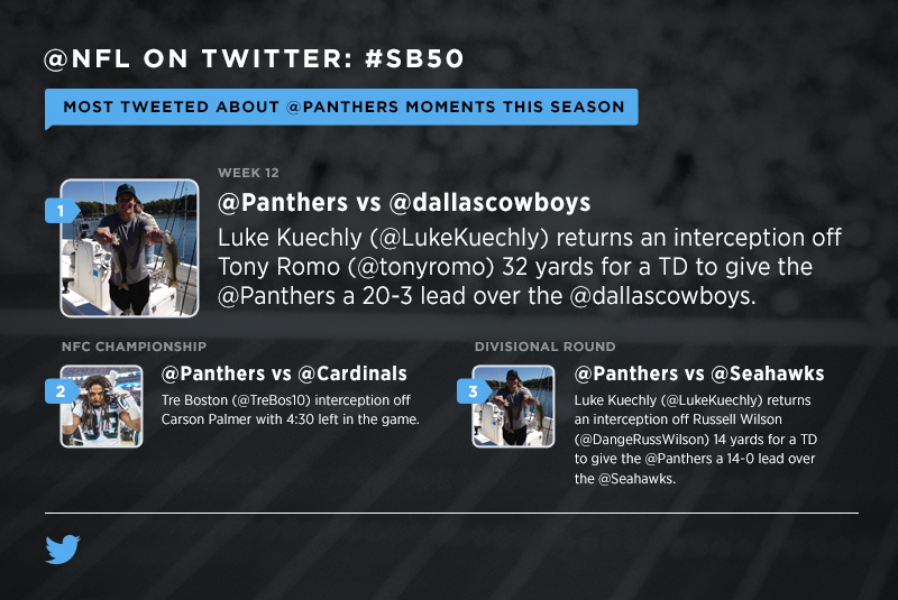 And here are the most-Tweeted @Broncos moments from this season:

Lastly, fans have Tweeted about the highs and lows of their favorite players all season long. Here are the most-mentioned players on Twitter from both teams this season: 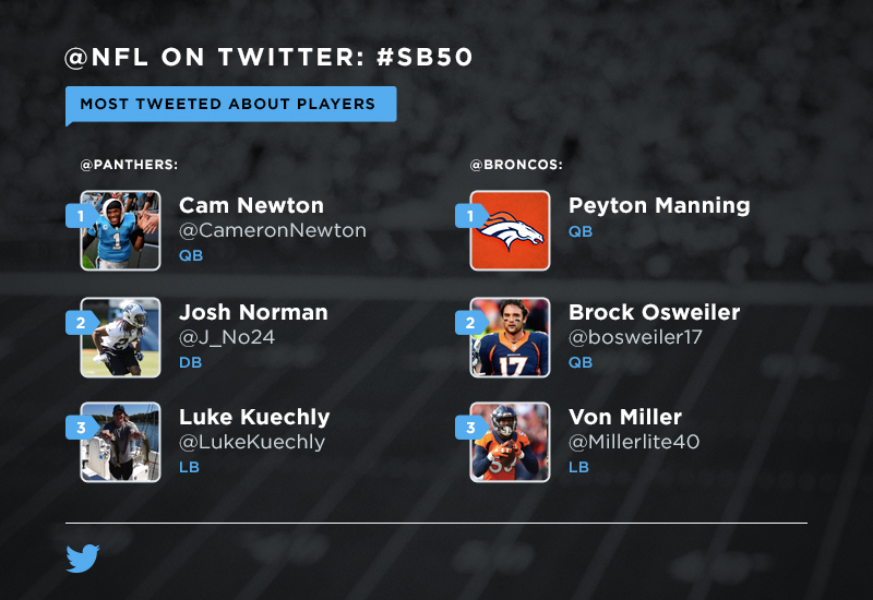