It all comes down to this. The #SuperBowl.

The @AtlantaFalcons and @Patriots have punched their ticket to Super Bowl LI in Houston and Twitter is your home for all the news before, during and after #SB51.

No matter where you are or who you are rooting for, consider Twitter and Periscope your home for all things #SB51.

Join the #SB51 conversation
The best and fastest way to join the live Super Bowl conversation and connect directly with the teams and fellow fans is to Tweet with, and search for, #SuperBowl and #SB51.

To help bring #SB51 Tweets to life, Twitter and the @NFL have partnered on special Super Bowl emojis. Fans can Tweet with these hashtags (#SuperBowl, #SB51, #RiseUp, #Patriots and #PepsiHalftime) to bring color to their Super Bowl Tweets:

Moments and Periscope
Worried you’ll miss some of the most important #SB51 Tweets? Don’t be! Check out Twitter Moments by clicking the new Explore tab on Twitter. From now through the game, there will be Moments about the Super Bowl that will appear in the Explore section, full of all the great content and stories unfolding during and around the game. 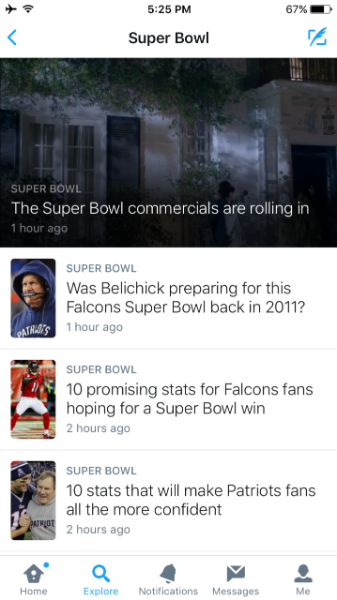 Periscope is getting in the game, enabling popular hashtags that trigger a flurry of SB51-themed custom hearts. These will float up to the top of the screen alongside the traditional hearts and are enabled by including any of the following hashtags in the title of the broadcast: #SB51, #SuperBowl, #football, #Patriots, #Falcons and #RiseUp.

The @AtlantaFalcons and @Patriots are busy getting ready for Sunday’s action, but they’ve had time to share their Super Bowl experiences on Twitter.

Follow and stay connected to the @Patriots players too, including Martellus Bennett (@MartysaurusRex), Legarrette Blount (@LG_Blount) and Rob Ninkovich (@ninko50).

Super Bowl Brands & Twitter Insights
A full 70% of people on Twitter claim an interest in sports, and they’re 40% more likely to say they love sports than those who don’t use Twitter. Passionate fans know Twitter enhances their viewing experience. Not only are 66% of them on Twitter while watching, but 70% enjoy watching sports more when they follow relevant commentary on Twitter. Check out Twitter’s recipe for brand success around big games like the Super Bowl.

Halftime Show
The @Pepsi Super Bowl Halftime Show is always one of the most-Tweeted moments of the big game. This year’s #PepsiHalftime performance will be headlined by @LadyGaga, one of Twitter’s most followed people, with over 65M Twitter followers.

Another artist account to follow ahead of the big game is country superstar Luke Bryan (@LukeBryanOnline), who will sing the national anthem to kick off the game.

The road to the #SuperBowl
Throughout the entire 2016 season and into the playoffs, Twitter is where fans, athletes, commentators and more went before, during and after the game for all things NFL.

People from around the US have been Tweeting about the Falcons and Patriots all year long, so we were curious how the country has been talking about the two teams. Each state is shaded to represent how strong the Twitter chatter has been there throughout this season. 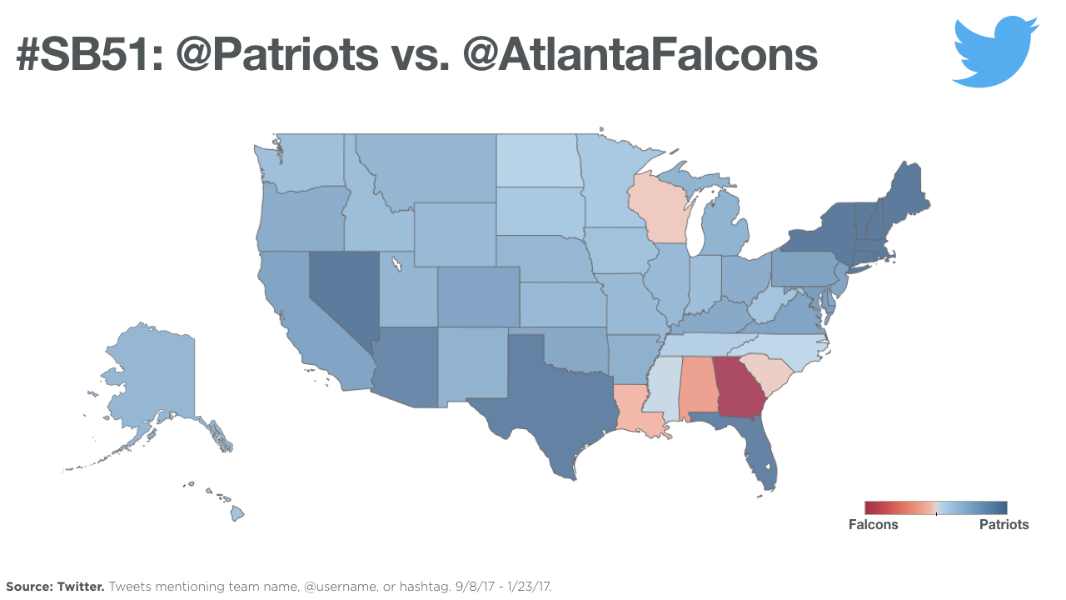 While the teams have to wait until Sunday to compete on the field, we compared how they matched up on Twitter. Here’s a look at the Twitter conversation about quarterbacks Matt Ryan and Tom Brady (and his replacements) throughout the 2016 season: 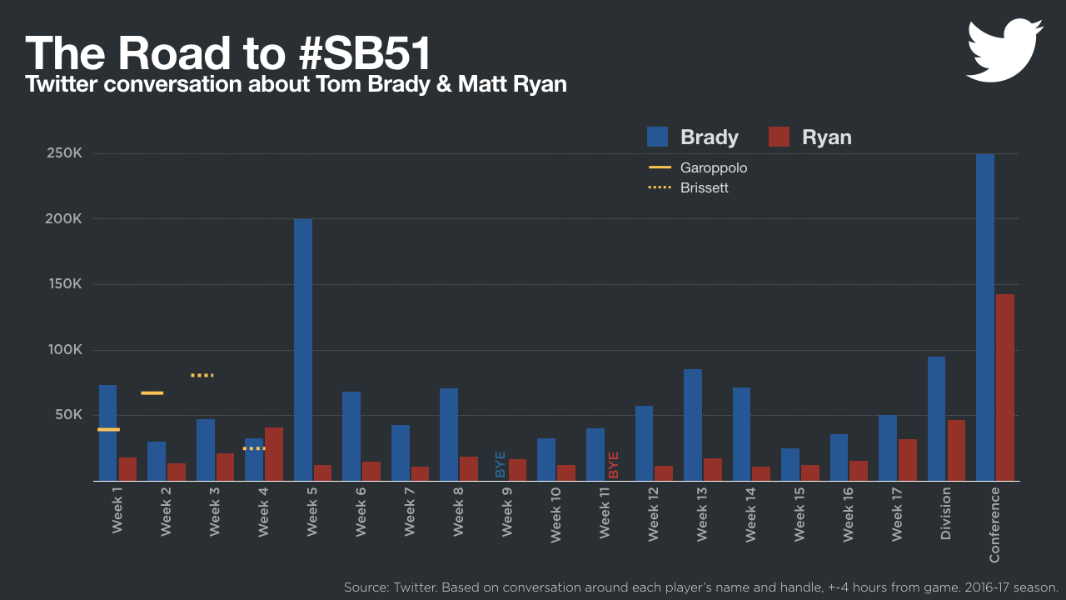 And another look at Twitter conversation around each team’s games this season: 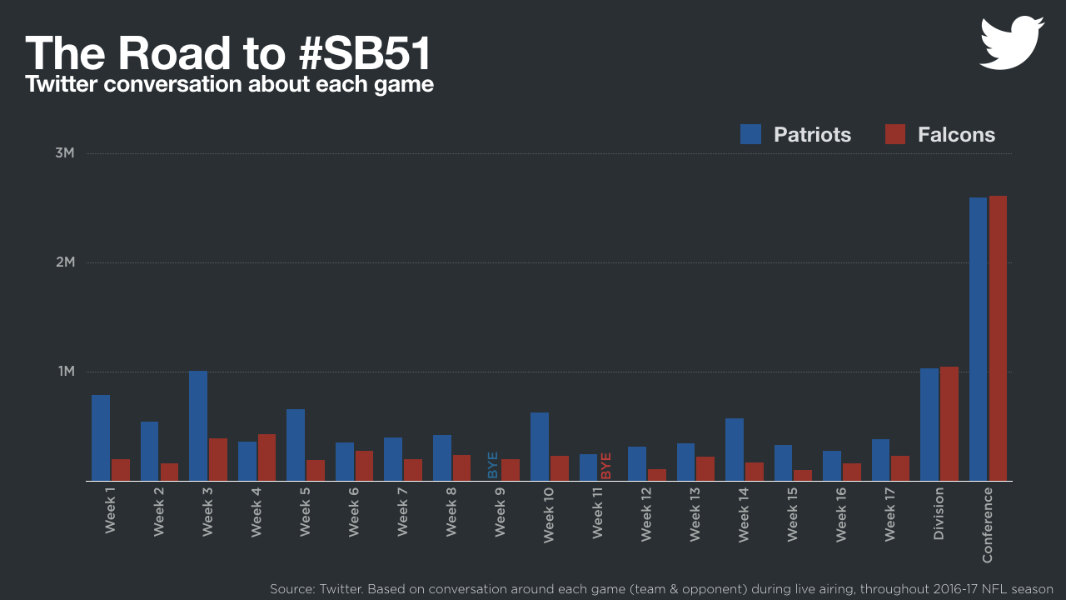 The Falcons and Patriots are in Houston now, but what happened along the way? Below is a peek at the road to Super Bowl LI during the #NFLPlayoffs.

The playoffs’ most popular players on Twitter? @AaronRodgers ranked first for chatter, followed by Tom Brady, @M_Ryan02, @dak and @juliojones_11. 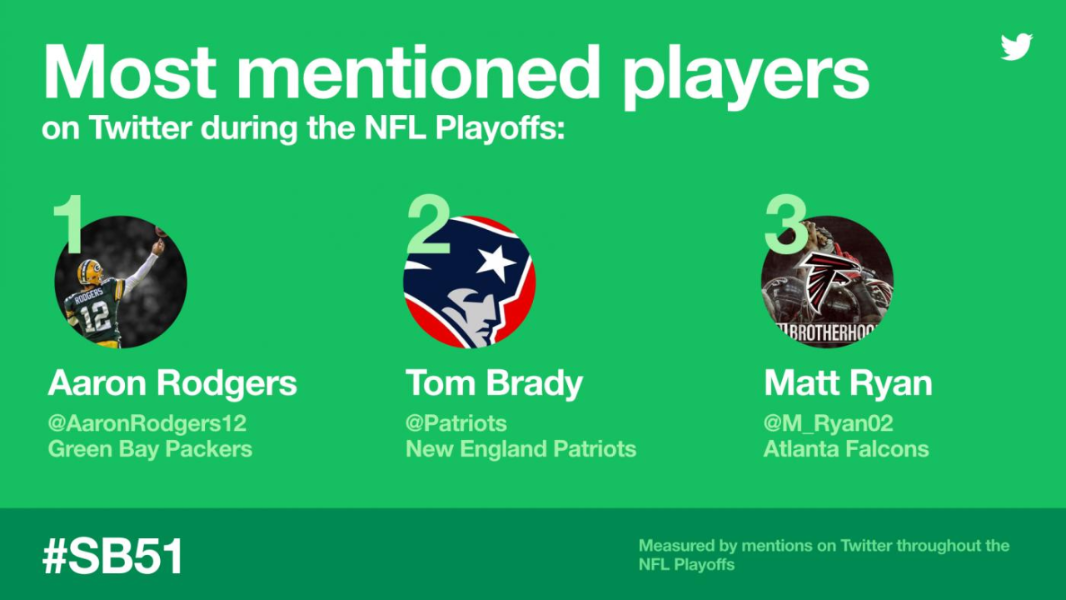 Here are the most-mentioned players on Twitter from both Super Bowl teams throughout the course of this season (including playoffs):

NFL fans have also been Tweeting about top plays and moments all season long. These were the most Tweeted @AtlantaFalcons moments this season: 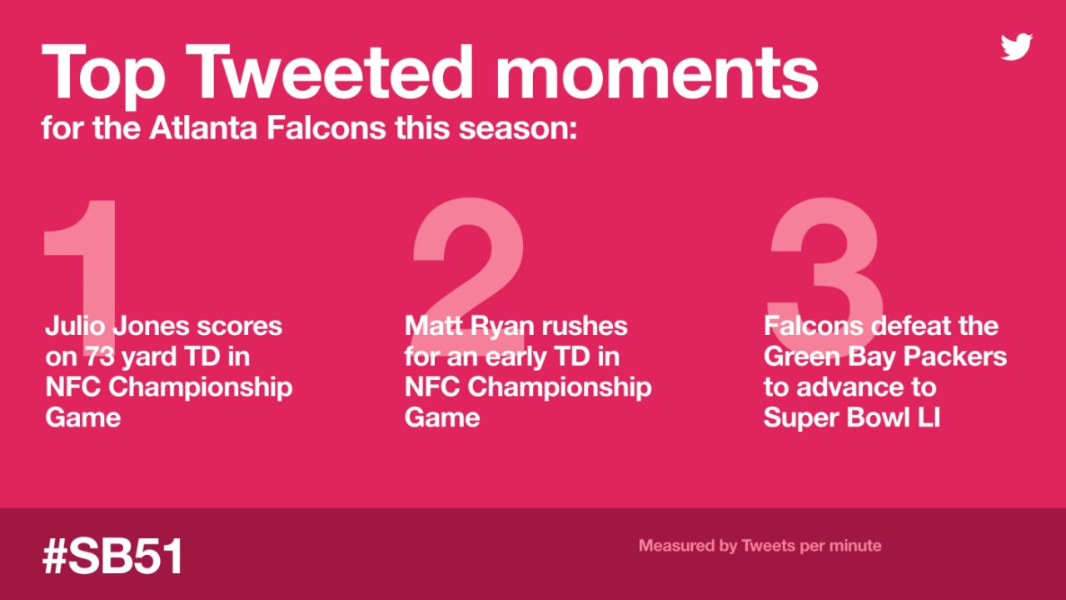 And here are the most-Tweeted @Patriots moments from this season: 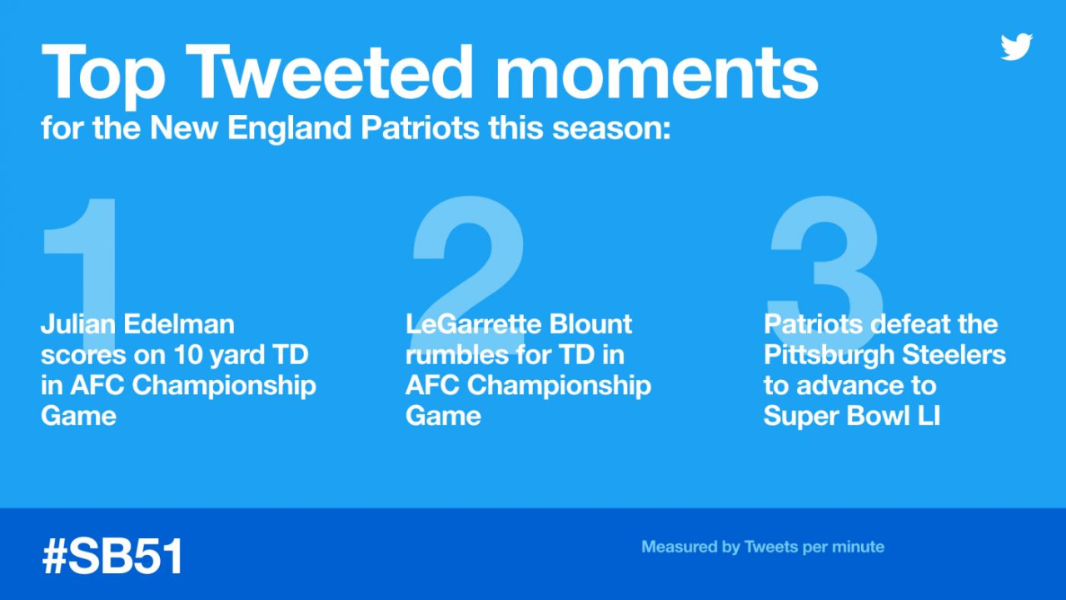 Enjoy the Super Bowl… and remember to check back here on Sunday night when we recap how the game played out on the field and, of course, on Twitter!